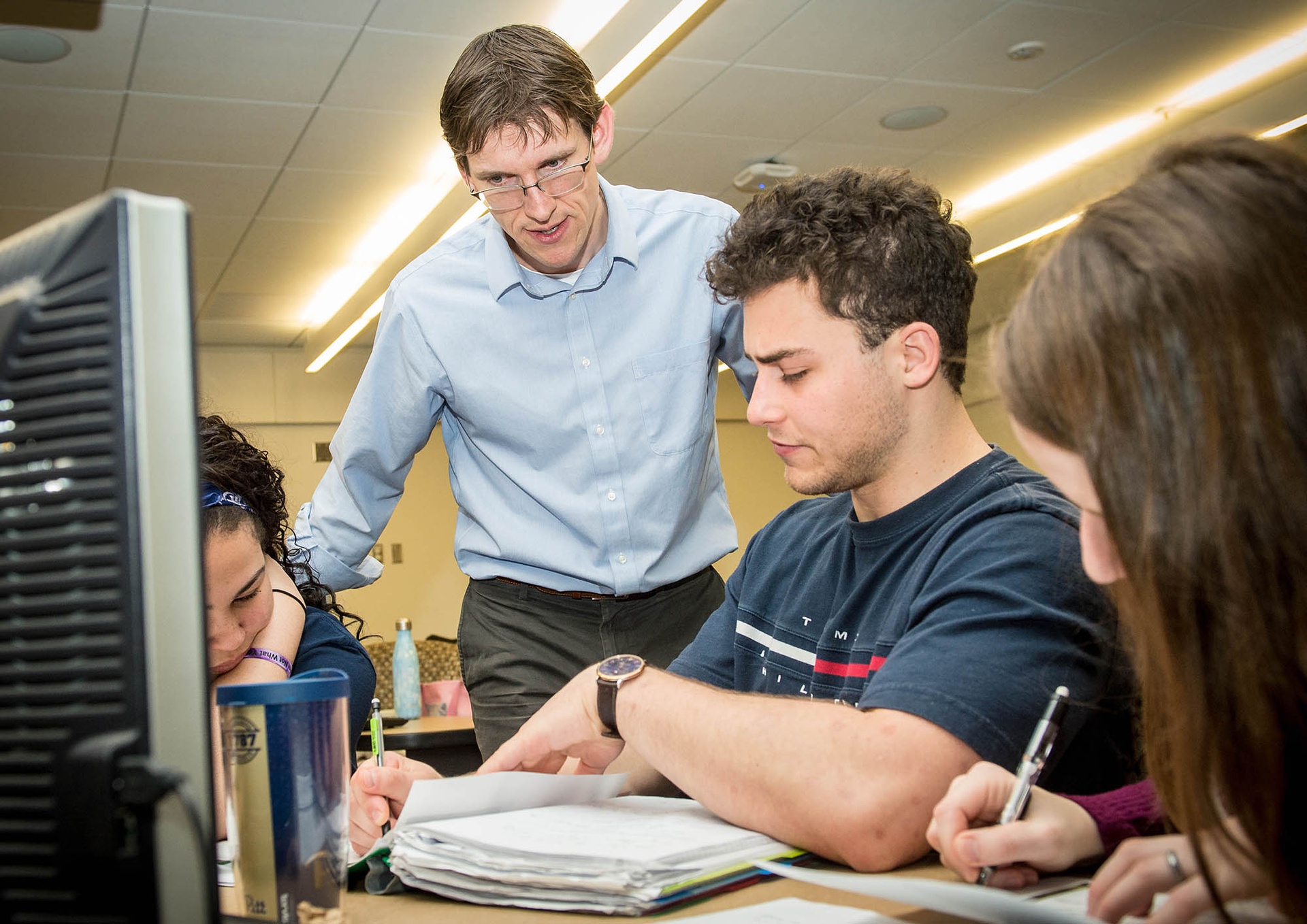 Tevis Jacobs, an assistant professor in mechanical engineering, joined the faculty of Pitt’s Swanson School of Engineering in fall 2015. (Mike Drazdzinski/University of Pittsburgh)

Originally posted in in the University Times:https://www.utimes.pitt.edu/news/teaching-heroes-school

In his classroom, engineering faculty member Tevis Jacobs is one animated presenter.

He speaks rapidly and enthusiastically while adding diagrams to clear overlays on two screens of slides projected onto the white board.  The course is “Mechanical Behavior of Materials,” which examines how things bend and break, down to their atomic structures. Today’s class encompasses the concepts of “work hardening,” “twinning,” and nickel-based super alloys (“You guys know that is my favorite topic,” Jacobs says).

He adds a bunch of equations to the board to illustrate a concept. “I would never expect you to memorize that on a test,” he says. “I would absolutely expect you to understand where it came from.”

Jacobs pauses to point his students toward the Carnegie Museum of Natural History’s crystal display, with its illustration of growth twins — one crystal structure at one orientation, attached to another at a different orientation. “You’ve got to go,” he says. As students in Jacobs’ department (mechanical engineering and materials science), “you will enjoy it way more than normal people,” he says.

He sets pairs of students loose on a question about “dislocation interactions,” and patrols the room as their debates begin.

“I heard some good discussions. Who has an idea?” he says. “Don’t be afraid to be wrong. And there are multiple answers.”

He hovers over one pair, listening. “I agree with you,” he says finally. “What would be the ramifications of that?” The pair give their answer. “Maybe. Maybe. But why?” he asks.

Jacobs joined the faculty of the Swanson School of Engineering in fall 2015, teaching this undergraduate class and another on experimental techniques, and offering one on tribology — the study of friction, wear and lubrication of sliding surfaces — to graduate students.

“I’ve always wanted to understand how the world works,” Jacobs says. “Mechanical engineering and materials science: what I like about them is that they are all around us. We are constantly interacting with objects, seeing how they perform. I like the idea of making them better in the future … but the current goal is (studying) ‘Why did this thing happen in this way?’

“What I love,” he adds, “especially in the classes I’m teaching now: we can answer that.”

But answers don’t always come easily to students. “We learn through struggle,” Jacobs says. “When I think about my own learning, that has been true.”

In high school and college, he learned calculus and how to solve differential equations —absorbing the content “without really internalizing the ‘why’ and the ‘how,’ ” he says. Then in grad school, faced with real-world problems, “all of a sudden I was not able to link it to the coursework I had taken. I almost had to re-teach myself the calculus. I thought I understood it before that. When I went through this — then I got it: Oh, that is what they were trying to teach me.”

To make “struggle” educational, a classroom lesson “has to be hard, but (students) have to care,” Jacobs explains. “It’s easy to make this hard; you want to make it hard with purpose. I’m still constantly refining that.”

One way to may sure students care about engineering lessons is to give them real-world problems, such as how to design a bridge, or how to tell when a mountain-climbing rope or a solar cell will fail?

“In the classroom … there is an impact on the world. If you inspire that student to be excited about a topic or to be inspired about learning in the future, that has an impact.”

He also tries to instill a passion for the communication of science, since these students will likely be using scientific writing in the future.

“The doing of science is either useless or far less useful if it is not effectively communicated,” both inside the scientific community and to the world at large, he says. “No matter where our students go, they will need to effectively communicate technical information. I see that as one of the most important skills I want them to get out of their undergraduate experience.”

Jacobs recalls a moment from the spring 2019 semester that showed his ideas were working. He had given students the last 20 minutes of class to work on a real-world problem. When it was time to go, class members asked if they could stay and keep working — “even though this is ungraded,” Jacobs marveled. Most of the class stayed and were kicked out only when another group of students arrived for a class in the same room.

“That felt like I was doing something right,” Jacobs says. “It was both hard, and they cared.”