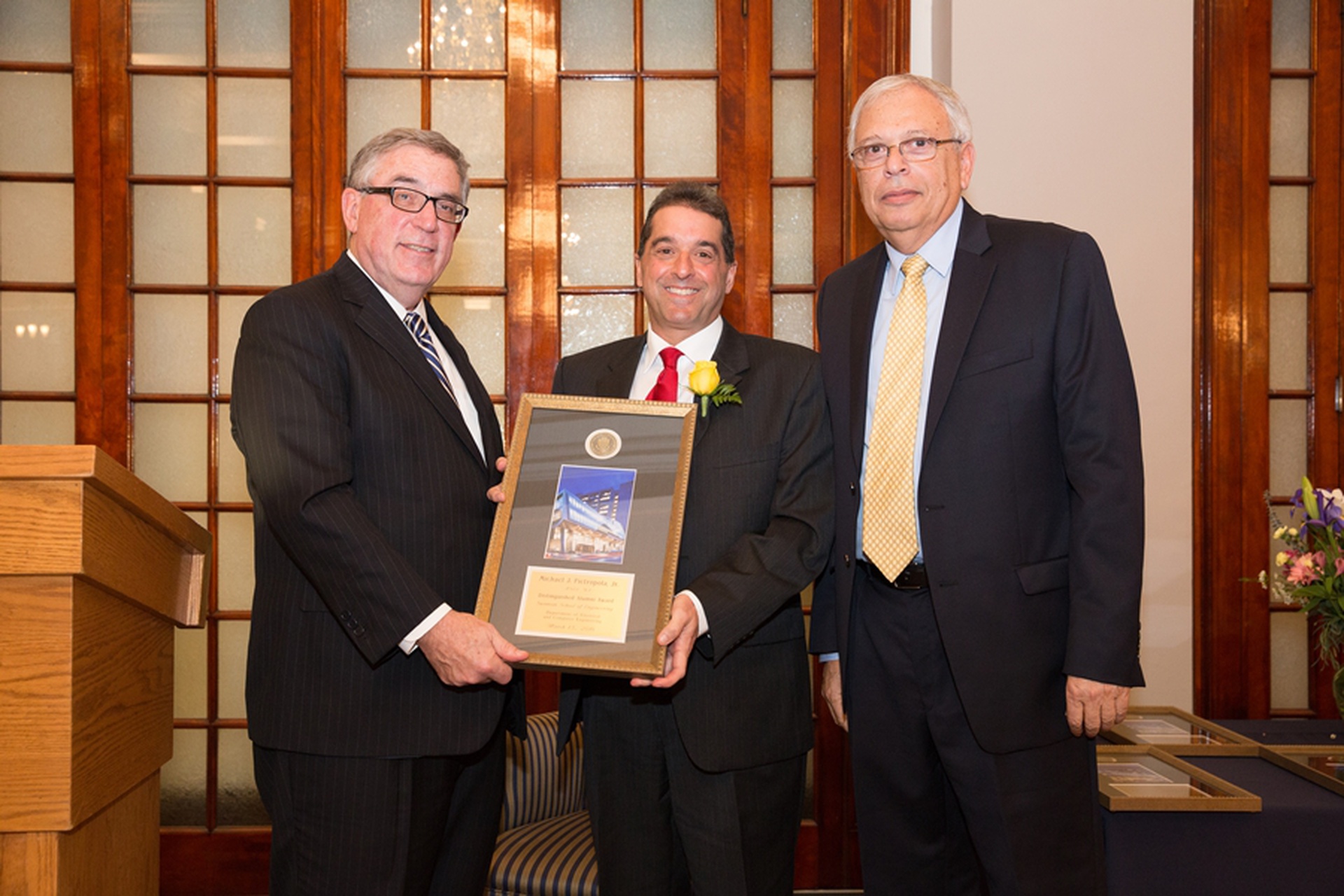 PITTSBURGH (March 16, 2016) … More than 300 faculty, staff, alumni and friends of the Swanson School of Engineering gathered last night to recognize this year's Distinguished Alumni Award recipients at the School's annual banquet in the University of Pittsburgh's Alumni Hall. Gerald D. Holder, US Steel Dean of Engineering, presented awards honoring alumni from each of the School's six departments, as well as for the Swanson School overall. This year's recipient for the Department of Electrical and Computer Engineering was Michael J. Pietropola, Jr., BSEE '83, President of Pietropola Consulting.

"The U.S. telecommunications industry has transformed our daily lives, and Michael has been a part of it throughout his career," Dean Holder said. "As an employee in the nascent cellular industry, and most notably in the start-up of Cingular Wireless, Michael managed the development of standards and policies to ensure consistent practices, and today provides consulting throughout the industry, expanding his expertise across one of our country's most critical fields."

About Michael Pietropola
Since receiving a degree in electrical engineering in 1983 from the University of Pittsburgh, Michael Pietropola has been a leader in telecommunications management. He has served as Director of RF Engineering for BellSouth Cellular, Director of Engineering and Operations for Georgia for BellSouth Mobility, Network Vice President-Georgia Operations for BellSouth Telecommunications, Network Vice President for Technology Planning and Deployment for Bellsouth Science and Technology Department before rising to the corporate executive level for Cingular Wireless in October 2000.

Mr. Pietropola played an integral role in the start-up of Cingular Wireless—a joint venture between Bellsouth and Southwestern Bell wireless companies. He oversaw the development of standards and policies to ensure consistent practices throughout the nationwide network. He was one of two board members representing Cingular in a joint venture between Cingular and T-Mobile, which combined network operations in California and New York City from 2001 until the deal was absolved in 2004.

Instrumental in the Cingular acquisition, Mr. Pietropola handled the due diligence and post-acquisition integration of AT&T wireless. He again used his extensive knowledge and experience to create a more robust network and develop vital standards and polices network-wide. Mr. Pietropola held the title of Vice President of Network Service until Cingular merged with AT&T after Southwestern Bell acquired Bellsouth in 2007.

After the merger, Mr. Pietropola became the Vice President of the Network Planning and Engineering organization, responsible for core growth that supported the iPhone launches. He was asked to lead the merger integration planning of the anticipated AT&T acquisition of T-Mobile. He and his team were responsible for identification of merger synergies and for planning of the new combined organization for AT&T. At the close of his tenure with AT&T, Mr. Pietropola was the Vice President of Construction and Engineering for the Southeast region, approximately 40 percent of the AT&T nationwide deployment budget.

Today Mr. Pietropola is president of his consulting firm, which specializes in telecommunications network management and offers consolation to investment firms.