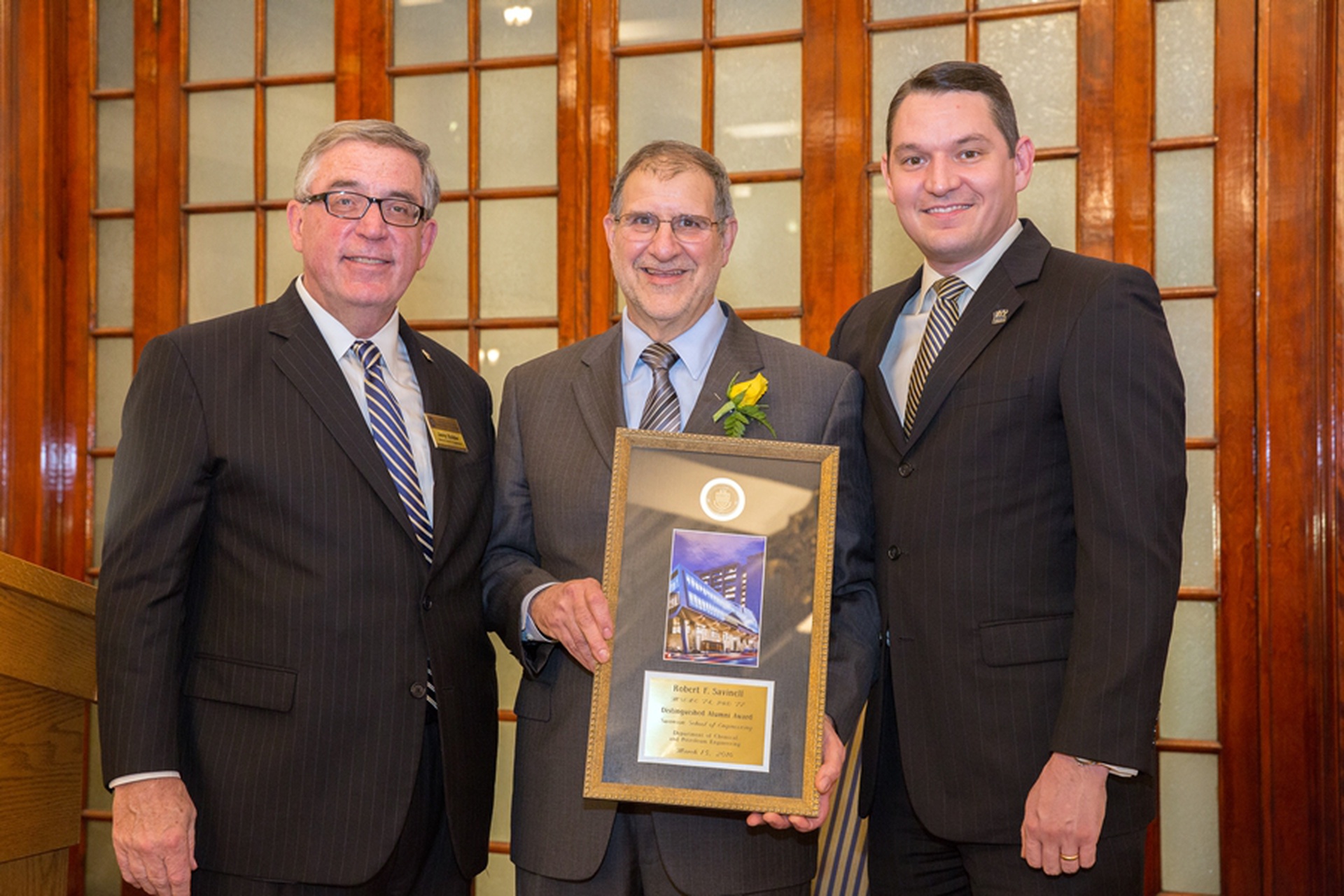 PITTSBURGH (March 16, 2016) … More than 300 faculty, staff, alumni and friends of the Swanson School of Engineering gathered last night to recognize this year's Distinguished Alumni Award recipients at the School's annual banquet in the University of Pittsburgh's Alumni Hall. Gerald D. Holder, US Steel Dean of Engineering, presented awards honoring alumni from each of the School's six departments, as well as for the Swanson School overall. This year's recipient for the Department of Chemical and Petroleum Engineering was Robert F. Savinell, MSCHE '74, PhD '77, the George S. Dively Professor of Electrochemical Engineering at Case Western Reserve University.

"It is an honor and privilege to recognize those alumni who have helped to transform their field and contributed to the benefit of society," Dean Holder said. "We are especially pleased to recognize Robert for his contributions to the field of electrochemical research, as well as his accomplishments in the lab, the classroom and throughout academia."

About Dr. Savinell
Robert F. Savinell holds a master’s and doctoral degree in chemical and petroleum engineering from the University of Pittsburgh. An internationally-recognized scholar in the field of electrochemistry, he is the George S. Dively Professor of Engineering and a professor of chemical engineering at Case Western Reserve.

Dr. Savinell joined the Case Western Reserve faculty in 1986 as an associate professor of chemical engineering. Prior to this, he worked for several years as a research scientist for the Diamond Shamrock Corporation and sat on the faculty of the University of Akron. These experiences further developed his interest in electrochemical fundamentals and technologies. His research addresses fundamental engineering and mechanistic issues of electrochemical systems/device design, development, and optimization. The technologies he has worked on include fuel cells, flow batteries, electrochemical capacitors, sensors, chemical synthesis and metal recovery, wastewater treatment, and high surface area electrode structures.

Dr. Savinell has been particularly active in developing and integrating new materials into electrochemical systems. He is co-inventor of the first membrane capable of practical proton conductivity at temperatures above 100°C at low relative humidity. This ground-breaking work has provided the inspiration for world-wide activity in developing high temperature polymer electrolytes for fuel cell and hydrogen pumping/purification applications. His recent work involves creating a flow battery primarily using iron and water—designed to improve the efficiency of the power grid and accelerate the addition of solar and wind power supplies. Even some of his early work on flow batteries, hydrogen-bromine rechargeable fuel cells, and shunt current modeling are now again receiving attention because of the intense interest in large-scale energy storage for grid stability/robustness and renewable energy implementation.

Pictured above from left: Dean Holder, Dr. Savinell and Steven Little, Professor and Chair of Electrical and Petroleum Engineering.