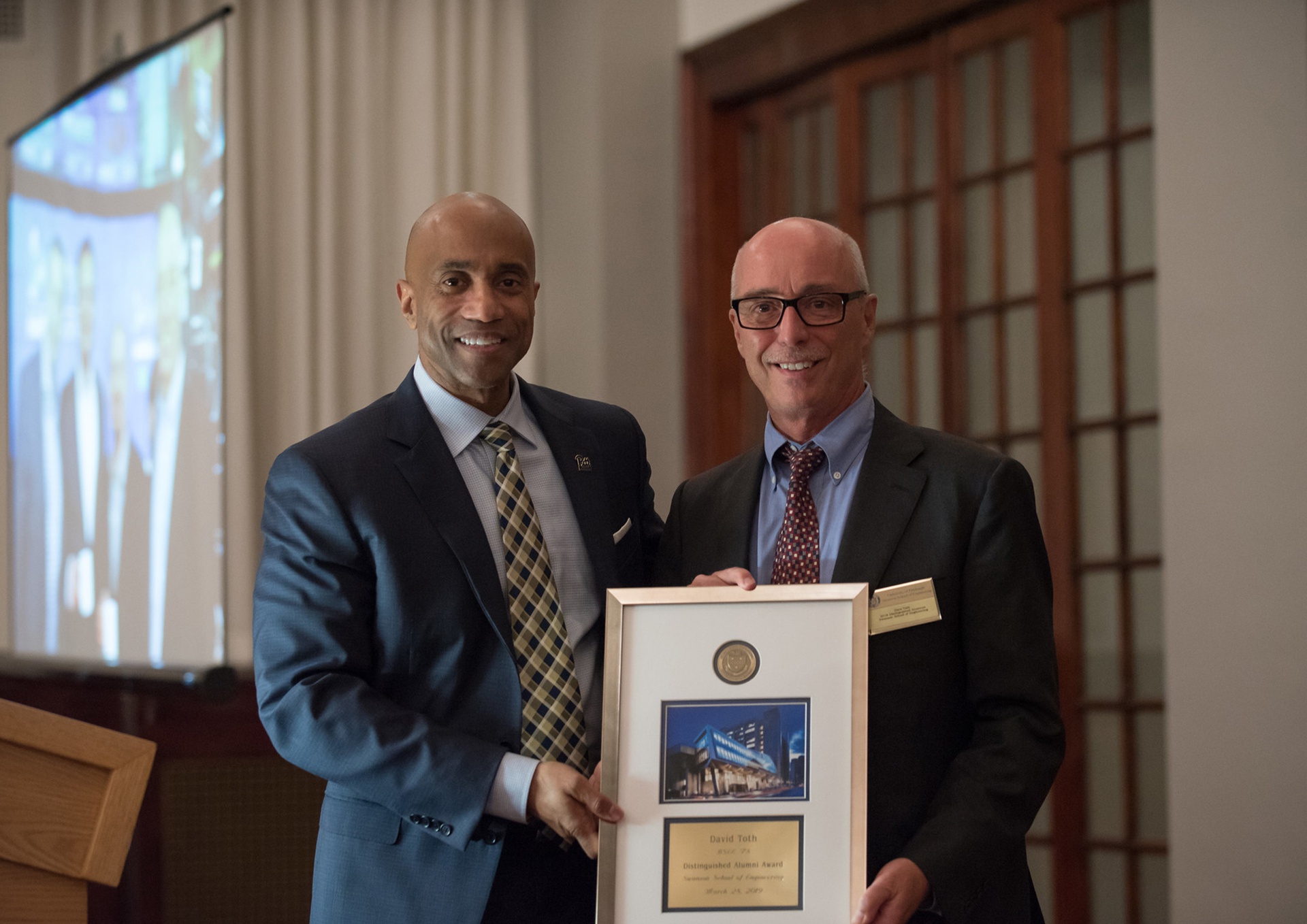 PITTSBURGH (April 11, 2019) ... This year’s Distinguished Alumni from the University of Pittsburgh Swanson School of Engineering have worked with lesson plans and strategic plans, cosmetics and the cosmos, brains and barrels and bridges. It’s a diverse group, but each honoree shares two things in common on their long lists of accomplishments: outstanding achievement in their fields, and of course, graduation from the University of Pittsburgh.

The distinguished alumnus chosen to represent the Swanson School of Engineering overall in 2019 is David Toth, BSEE ’78, President and CEO (retired) of NetRatings, Inc.

The six individuals representing each of the Swanson School’s departments and one overall honoree representing the entire school gathered at the 55th annual Distinguished Alumni Banquet at the University of Pittsburgh’s Alumni Hall to accept their awards.  James R. Martin II, US Steel Dean of Engineering, led the banquet for the first time since starting his tenure at Pitt in the fall.

“We may not think about it, but in some ways the Internet itself is not a product. It is a conduit, a medium. And we are not its customers,” said Dean Martin. “We, its users, are the product, and David and his peers were the first to realize that how people use the internet could provide an amazing amount of information, maybe even more so than more traditional media such as television, magazines, and newspapers.”

Mr. Toth, the Swanson School’s Distinguished Alumnus, has held several senior executive roles throughout his career. He co-founded NetRatings, Inc. in 1997 and served as President & CEO, leading the company to its position as the foremost provider of Internet audience information and analysis. Mr. Toth formed strategic partnerships with Nielsen Media Research and ACNielsen; together, the three companies developed Nielsen//NetRatings service, the leading global Internet Audience Measurement service with deployments in 29 countries throughout the world.

Prior to forming NetRatings, Mr. Toth was Vice President at Hitachi Computer Products where he led the Network Products Group and was responsible for the development, sales and marketing of numerous hardware and software products. Other former affiliations include Lawrence Livermore National Laboratory, Interlink Computer Sciences and PPG Industries.

Mr. Toth is currently a member of the Board of Directors at HiveIO, LeadCrunch.AI, and GutCheckIt.com. He was formerly a Director at NexTag (acquired by Providence Equity Partners), TubeMogul (acquired by Adobe) and Edgewater Networks (acquired by Ribbon Communications).

In 2003, Mr. Toth was recognized as the Swanson School Distinguished Alumnus for the Department of Electrical Engineering, having graduated from Pitt with a bachelor’s degree in electrical engineering in 1978.