Prestigious national honor supports research efforts of students pursuing careers in the fields of engineering, mathematics, and the natural sciences

The Goldwater Scholarship, established in 1986 by the U.S. Congress and named for then-Senator Barry M. Goldwater of Arizona, supports outstanding students who are pursuing careers in the fields of engineering, mathematics, and the natural sciences. The award—granted in either a student’s sophomore or junior year—assists in covering the costs of books, room and board, and tuition for each student’s remaining period of study.

Institutions can nominate up to four students per year for the Goldwater Scholarship. This is the fourth consecutive year that all of Pitt’s nominees have received either the scholarship or an honorable mention designation. Pitt students have now won a total of 47 Goldwater Scholarships since 1996.

“The University of Pittsburgh is immensely proud of our four 2016 Barry M. Goldwater Scholarship nominees as well as Pitt’s continued success in this prestigious, highly competitive awards competition. Our track record is a testament to the high quality of our students as well as the strength of our institution,” said University Honors College Dean Edward M. Stricker. “Our Goldwater Scholars will use their scholarships to further hone their skills as researchers in the chemical engineering and molecular biology fields. They all have admirable aspirations to use those skills for the betterment of society, and we applaud and support their noble pursuits.” 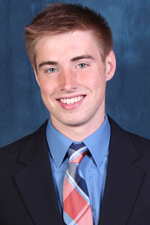 Asinger plans to focus his professional research in the areas of improved renewable energy conversion and storage. Bridging the gap between laboratory experimentation and real-world application, he is working to be an influential figure in the development of catalyst systems that can efficiently convert carbon dioxide into fuel sources on a large scale.

Asinger’s undergraduate research pursuits have been performed in the laboratory of Swanson School professor Götz Veser. This summer, he will be conducting research through the Mascaro Center for Sustainable Innovation.

In addition to his research, Asinger has been an organic chemistry teaching assistant, an outreach coordinator for the American Chemical Society, and a member of Engineers for a Sustainable World and the Chemical Engineering Honor Society. His previous honors and distinctions include Pitt’s University Scholarship, the most honorable design designation at the 2014 Pitt Student Design Expo, and the Deutscher Akademischer Austauschdienst (DAAD) RISE Scholarship from the German Academic Exchange Service.

Natalie R. Dall is Pitt’s incoming Student Government Board president. A native of Loveland, Ohio, she is majoring in molecular biology within the Dietrich School. Upon her anticipated graduation from Pitt in the spring of 2017, Dall plans to pursue a doctoral degree in biology.

As an undergraduate, Dall has been performing research in the lab of Pitt biological sciences professor Mark Rebeiz for the past two years. Her work in the Rebeiz lab has been published in the peer-reviewed journal Developmental Cell.

During her undergraduate career, Dall has been an active member of numerous campus organizations, including the Student Government Board and the national leadership honor society Omicron Delta Kappa. Her previous honors and distinctions include the Norman H. Horowitz Fellowship and the Howard Hughes Medical Institute Mentor/Mentee Fellowship. 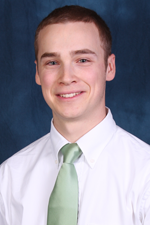 Hansen plans to focus his professional research pursuits towards clean energy production and energy storage. He looks forward to collaborating with scientists and engineers from different technical and international backgrounds in order to make breakthroughs in the energy field.

This summer, Hansen will continue his energy research through the Amgen Scholars Program at the California Institute of Technology. His other awards and distinctions include the Swanson School’s John W. Tierney Scholarship and Edward B. Stuart and Geraldine J. Stuart Memorial Scholarship. He was an active member of such notable organizations as the American Nuclear Society and the American Institute of Chemical Engineers. Hansen also served as a peer advisor on Pitt’s Freshman Engineering Leadership Team.

Goldwater honorable mention designee Ethan A. Garcia-Baker is majoring in neuroscience as well as history and philosophy of science within the Dietrich School. Upon his anticipated graduation from Pitt in the spring of 2017, he plans to pursue a doctoral degree in computational biology and genomics.

Pitt’s four 2016 Goldwater Scholarship applicants were nominated with assistance from Pitt’s University Honors College, which advises Pitt undergraduate students and alumni who are interested in pursuing national and international awards.