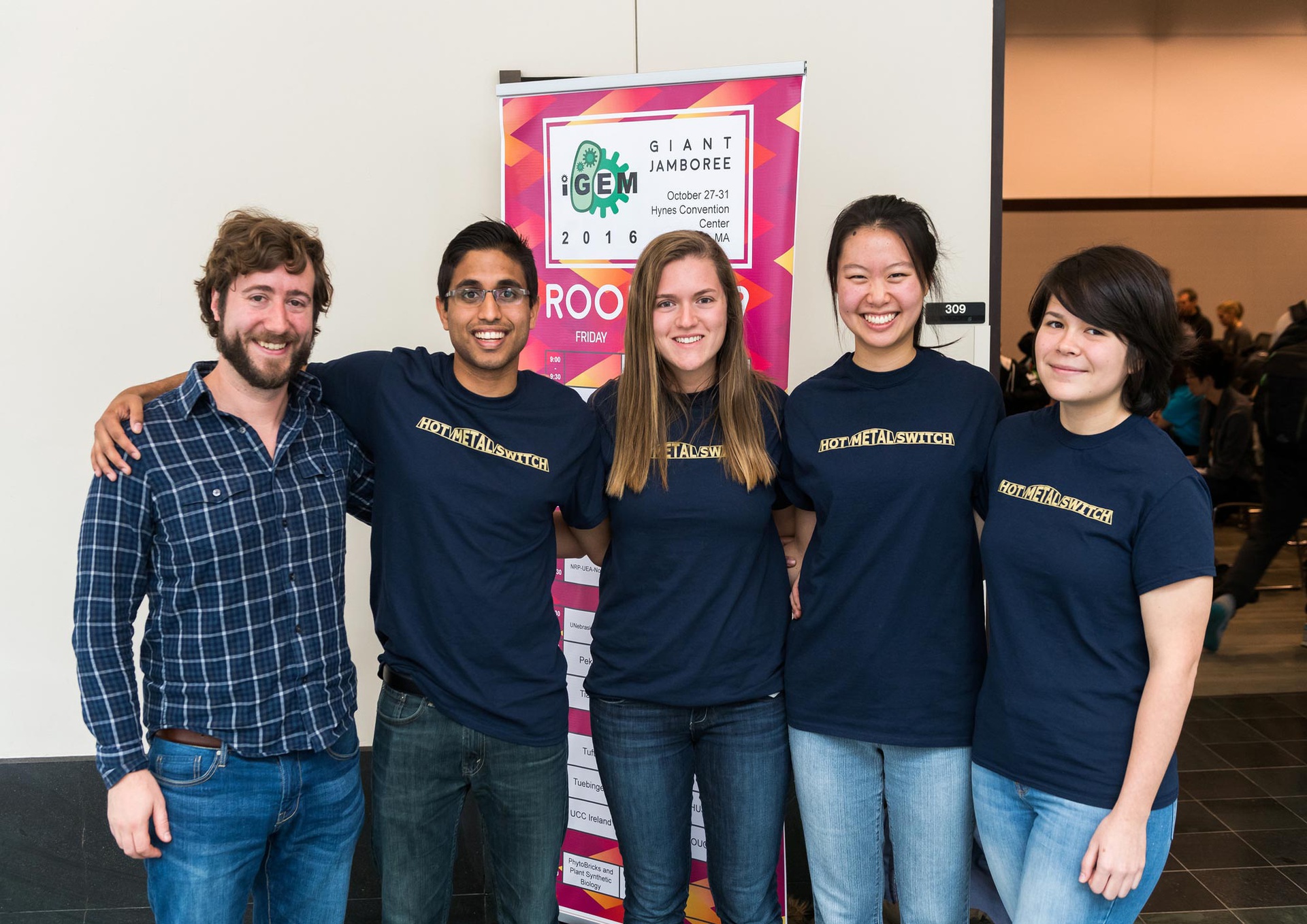 PITTSBURGH (December 12, 2016) … The International Genetically Engineered Machine (iGEM) Foundation hosts an annual competition for students to gain experience in the field of synthetic biology. Student teams spend 12 weeks during the summer building genetically engineered systems that aim to have an impact on their communities and the world. Their efforts continue into the fall semester until the Giant Jamboree in Boston, a meeting of more than 3,000 attendees and 299 teams from all over the world where students present their projects and celebrate months of hard work.

This year, the 2016 University of Pittsburgh iGEM team captured a gold medal for the first time.

The Pitt team’s project – “Hot Metal Switch” – focused on developing a cell-free sensor that uses bacterial cell extract and a DNA genetic circuit to detect high levels of lead in water. Forty-seven teams competed in the environmental category, and the Pitt team was one of six to be nominated for the Best Environmental Project because of their project’s potential application to provide an inexpensive way to test lead toxicity of drinking water in people’s homes.

“After three years of participating in the iGEM competition, we are very proud that our students were able to bring home the University’s first gold medal,” said Alex Deiters, professor in Pitt’s Department of Chemistry and a faculty advisor for the team. “The students gained valuable research experience, learned project management skills, impacted our community and cultivated an impressive multidisciplinary skill set in addition to netting the prestige that comes with the award.”

Their project was based on a system design that was originally developed at the Collins Lab at the Massachusetts Institute of Technology that uses DNA circuits and cell extract to detect specific RNA molecules. The Pitt students adapted the system to sense lead instead of RNAs by incorporating catalytically active DNA molecules, also known as DNAzymes, that are designed to self-cleave upon lead binding. For their sensor output they used the enzyme beta-galactoctosidase, which activates a colorimetric substrate so that contaminated water samples turn bright purple, producing clear and easy to understand results. While testing Hot Metal Switch, the Pitt team was able to detect a lead concentration of about 414 parts per billion (ppb) in water samples.

“The Environmental Protection Agency sets the maximum lead contamination level at 15 ppb; however, reports have shown actual lead levels in contaminated water to be much higher,” explains Chu. “We will continue testing Hot Metal Switch at lower levels, but our experiments up to this point show that we could have detected the lead in Flint, Michigan, for example, since the levels there were extremely high, measuring more than 13,000 ppb.”

While working on Hot Metal Switch, Pitt iGEM team members collaborated with Pittsburgh Public Schools and created a video to warn students about the dangers of lead poisoning. They developed a mathematical model to help authorities predict the blood-lead levels of children based on their amount of exposure to lead. The team also attended events such as the Carnegie Science Center’s H2Oh! Exhibit and Pitt’s Camp BioE to introduce more students to synthetic biology and its applications to solving environmental problems.

“Taking part in iGEM is a really unique research experience for the students,” said Jason Lohmueller, a postdoctoral fellow in the Department of Immunology at Pitt and iGEM coordinator. “They are creatively engaged in designing their project and can incorporate things like government policy, web design and entrepreneurship. The competition requires a variety of talents and talented people to succeed. I would encourage all interested Pitt students to apply because it really is an excellent undergraduate opportunity even if you don’t yet know anything about synthetic biology.”

Funding for the 2016 Pitt iGEM effort was provided by the Office of the Provost, the Swanson School of Engineering and the Departments of Bioengineering, Biological Sciences and Chemistry.