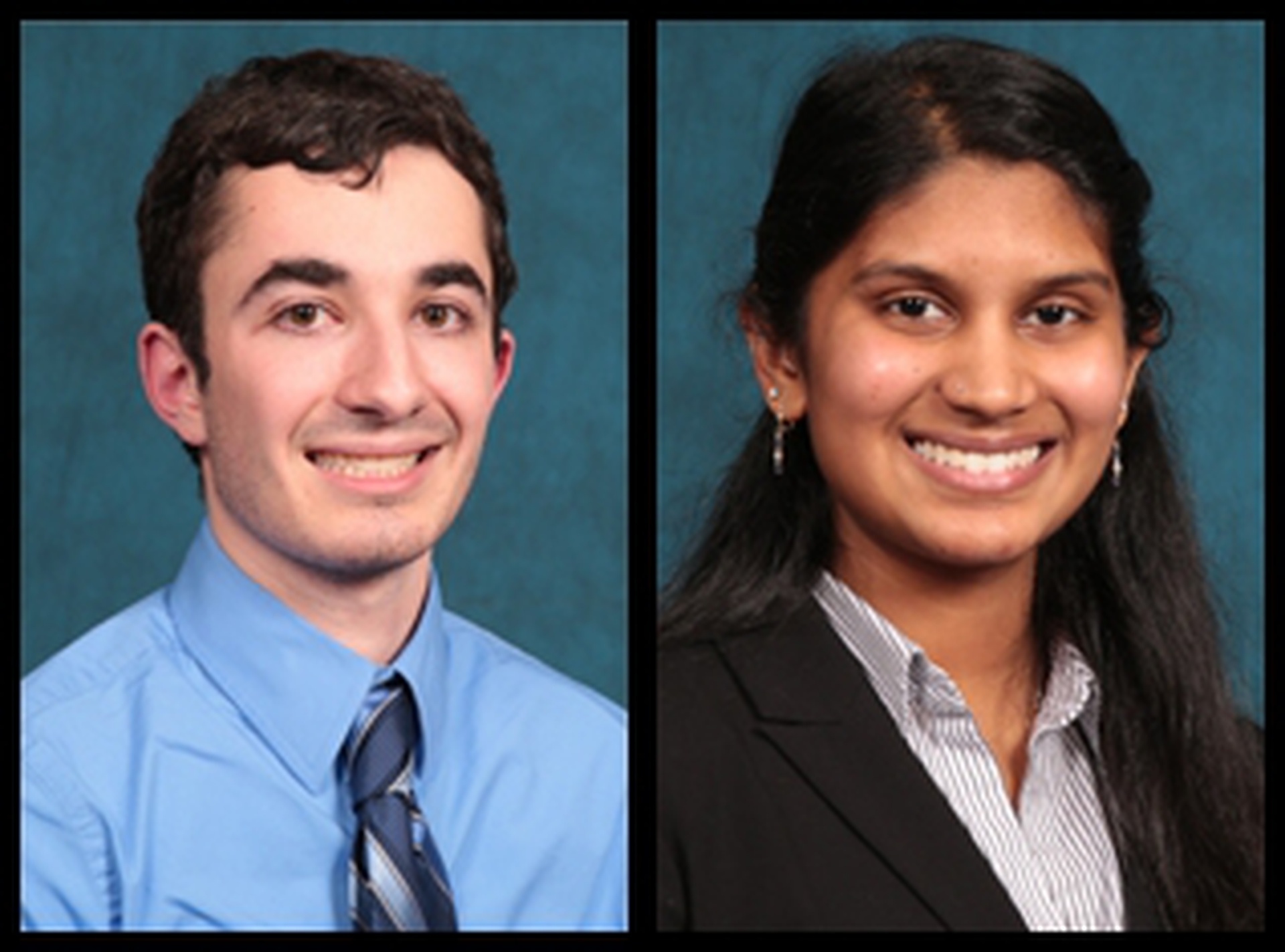 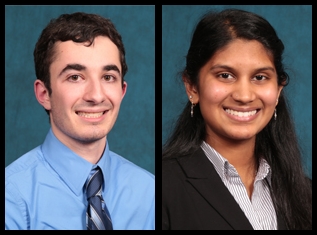 PITTSBURGH (April 22, 2015) ... The seniors of the year at the University of Pittsburgh have been named by the University's chapter of Omicron Delta Kappa , an honorary society that recognizes students who maintain a high standard of leadership in collegiate activities.

Michael Nites and Dhanalakshmi Thiyagarajan have received the 2015 Omicron Delta Kappa Senior of the Year award, which is given to students who possess and exhibit outstanding leadership qualities in service to the University. Their names will be engraved in a walkway between the Cathedral of Learning and Heinz Memorial Chapel alongside the names of previous recipients of the award.

Michael Nites, who served as president of Pitt's Student Government Board (SGB) in 2014, graduated in December 2014 with a bachelor's degree in industrial engineering from the Swanson School of Engineering and a bachelor's degree in applied mathematics and economics from the Kenneth P. Dietrich School of Arts and Sciences. Nites is working on special projects in Pitt's Office of the Chancellor until July, when he will begin working for McKinsey & Company , a global management consulting firm.

In addition to being president of SGB, Nites served as a member of the board and the SGB Allocations Committee, including one year as committee chair. Nites served as a student liaison to three Pitt Board of Trustees' committees (Student Affairs, Academic, and Budget) and four University Senate committees (Student Affairs, Computer Usage, Tenure and Academic Freedom, and Budget Policies). Nites also served on the University Sexual Assault Task Force, the Alcohol Task Force, the University Review Board, and the Honors College Advisory Board.

A native of Shaler, Pa., Nites was a University Honors College ambassador. As a volunteer coordinator for Pitt's Engineers for Sustainable Medical Development student organization, he organized weekly trips to Global Links, an international medical relief agency, and worked to repair and ship usable wheelchairs to patients abroad. He also worked on an interdisciplinary team of six undergraduate Pitt students who went to Rio de Janeiro, Brazil, to perform research on bamboo gridshells, which are rapidly deployable structures that can be used to provide shelter in developing countries during times of natural disaster.

Dhanalakshmi Thiyagaraja from Bethlehem, Pa., will graduate April 26 with a bachelor's degree in bioengineering from the Swanson School and a minor in chemistry from the Dietrich School. She also will earn a Certificate in Conceptual Foundations of Medicine from the Department of History and Philosophy of Science. She has been accepted into Temple University's School of Medicine and will begin her medical studies in the fall.

Thiyagarajan is the founder and president of the Gluten Free Awareness League on campus, and she has been promoting gluten-free awareness in the United States and India, working with national organizations, companies, and restaurants. For her efforts, she was profiled in the Fall 2013 edition of Allergic Living magazine.

Thiyagarajan has also demonstrated leadership on campus as president of the Society of Women Engineers chapter at Pitt, after serving the organization since 2011 as historian, membership chair, and secretary. She has served as an ambassador of the University Honors College, vice president of the Outside the Classroom Honorary Society, member of the Biomedical Engineering Society and of CHAARG (Changing Health, Attitudes, and Actions to Recreate Girls), and a tutor for students enrolled in courses based in science, technology, engineering, and math.

In 2014, Thiyagarajan won the Swanson School's Sustainability Design Expo for Product Realization for a new dental implant mesh she developed. She also was selected by Pitt's Innovation Institute to represent the University in the national "1000 Pitches" competition in the health category for her idea of a gluten-free sleeve to prevent cross-contamination of foods.

Thiyagarajan conducted an independent research project on celiac disease under Marc Schwartz, assistant professor of medicine in the Division of Gastroenterology, Hepatology, and Nutrition in Pitt's School of Medicine, and served as an undergraduate research assistant under James H-C. Wang, director of the MechanoBiology Laboratory within the Department of Orthopaedic Surgery and professor in the Departments of Physical Medicine and Rehabilitation, Bioengineering, and Mechanical Engineering and Materials Science.