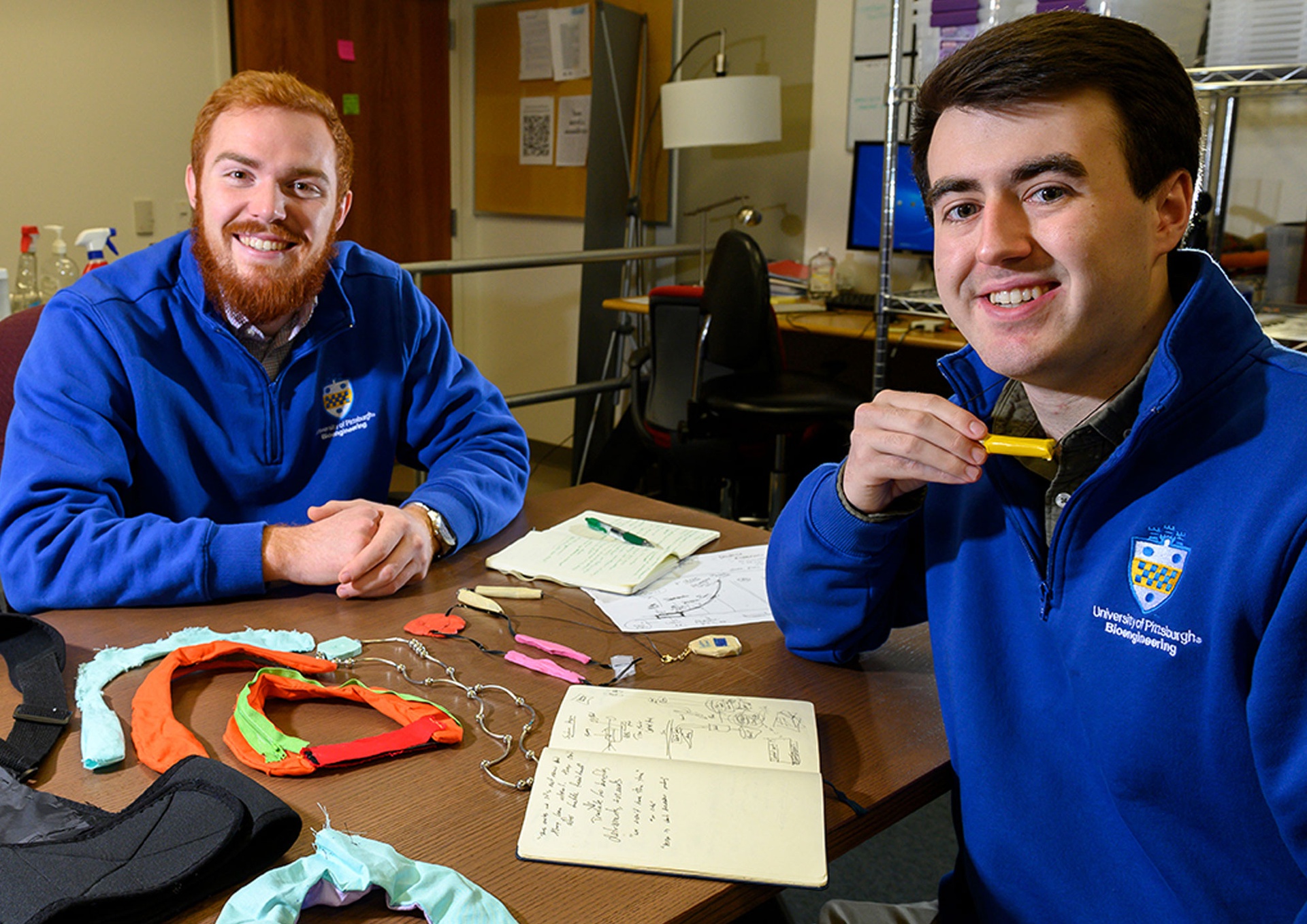 Tyler Bray (left) and Jacob Meadows (right) bioengineering seniors in Pitt’s Swanson School of Engineering, have been working on their brainchild Posture Protect. The duo has been working on various prototypes to their device, which aids people with Parkinson’s disease and other problems with fine motor skills with better posture. Bad posture is a concern in the Parkinson’s community, since it increases people’s chance of falling. (Tom Altany/University of Pittsburgh)

Tyler Bray and Jake Meadows continue work on Posture Protect, a device to help improve the posture of individuals with Parkinson’s disease and other movement disorders

In the Classroom to Community Design Lab in the Department of Bioengineering on the fourth floor of Benedum Hall, Jacob Meadows tries on a vest-like device. He bends forward slightly as the device vibrates and a red light on the vest’s shoulder flickers on and off.

“This is our first iteration prototype from two years ago, which features a light for demonstration during presentations.” said the bioengineering senior in Pitt’s Swanson School of Engineering.

Meadows and fellow bioengineering senior Tyler Bray have been developing this wearable device, Posture Protect, to help people with movement disorders like Parkinson’s disease, as well as their physical therapists. Meadows and Bray are among six teams of student innovators supported by the Classroom to Community program, a new initiative directed by bioengineering assistant professor Joseph Samosky and funded by Pitt’s Office of the Provost. The program helps mentor and bridge potential high-impact student projects from the classroom toward real-world impact.

The duo has been working on Posture Protect since 2017 when they first developed their idea and prototype as a capstone project in the course “The Art of Making: A Hands-on Introduction to Systems Design and Engineering”—a human-centered design course taught by Samosky. Bray’s grandmother was diagnosed with a stroke that semester, which spurred the idea to help people with fine motor control problems. In their research, they learned that people with Parkinson’s disease share similar issues and honed their focus.

“We sat in on fitness classes at a local boxing gym specifically for people with Parkinson’s disease and we learned that people with that disease struggle daily with posture,” Bray said. “We hadn’t really heard of that before because most people just associate it with hand tremors. We followed up with physical therapists who confirmed that this was true and important because it increases their risk of falls.”

The team has been experimenting with different designs, including vests, necklaces and one that rests comfortably on the user’s shoulders. And while people with Parkinson’s disease and stroke may have been the impetus for Posture Protect, the device can also be used by people with other conditions that affect postural control, such as multiple sclerosis.

When the user of the device bends over or slouches for a certain period of time, the wearable device will vibrate, informing the user that they are in poor posture. The student innovators say the final product aims to be unobtrusive, preventing unwanted attention.

The team’s highly successful capstone project in The Art of Making led to their winning the top award for “Best Overall Design” at the 2017 Swanson School of Engineering Design Expo. The two were then introduced to the Big Idea Center, part of Pitt’s Innovation Institute. The center is a hub for student innovation and entrepreneurship on Pitt’s campus. Posture Protect has made progress in the center’s programs, including the most recent program, the Forge student incubator, which is supported by Pitt Seed funding.

"We hadn’t thought about the business side of things before the Innovation Institute’s programs. Being able to get this out of the lab and to the people has been helpful for understanding better who our actual customer might be."
- Jacob Meadows

“This is an example of a couple of students who really keep going; they haven’t gotten discouraged and have been working steadily with our entrepreneurs-in-residence,” said Babs Carryer, the center’s director. “They’re persistent and it’s been great seeing how far they’ve come in the past two years. I have high hopes for them in future competitions. The persistent student entrepreneurs here usually do best because they take what they learn from previous programs and apply them to their products and business analysis for future competitions.”

Meadows and Bray have been working with the center to advance their product development, participating in competitions such as the Randall Family Big Idea Competition, the Startup Blitz and the Michael G. Wells Competition. They are entered into this year’s Randall competition and in April, will take Posture Protect to the ACC InVenture Prize Competition at North Carolina State University. They also plan to start a pilot program with local physical therapists and their patients soon.

“We’ve learned a lot about the innovation process as a whole: designing the product, showing it to people to get feedback, understanding business use cases and learning which initial target market may be the best,” said Meadows. “We hadn’t thought about the business side of things before the Innovation Institute’s programs. Being able to get this out of the lab and to the people has been helpful for understanding better who our actual customer might be.”

“The Big Idea Center has really helped us round out our experience and our education in terms of product development,” Bray added. “As engineers, we can design and build whatever we want, and we’ve learned some unique ways to do that. But once we graduate, so much of that is driven by business, and to be able to understand how that side of things work is extremely valuable.”