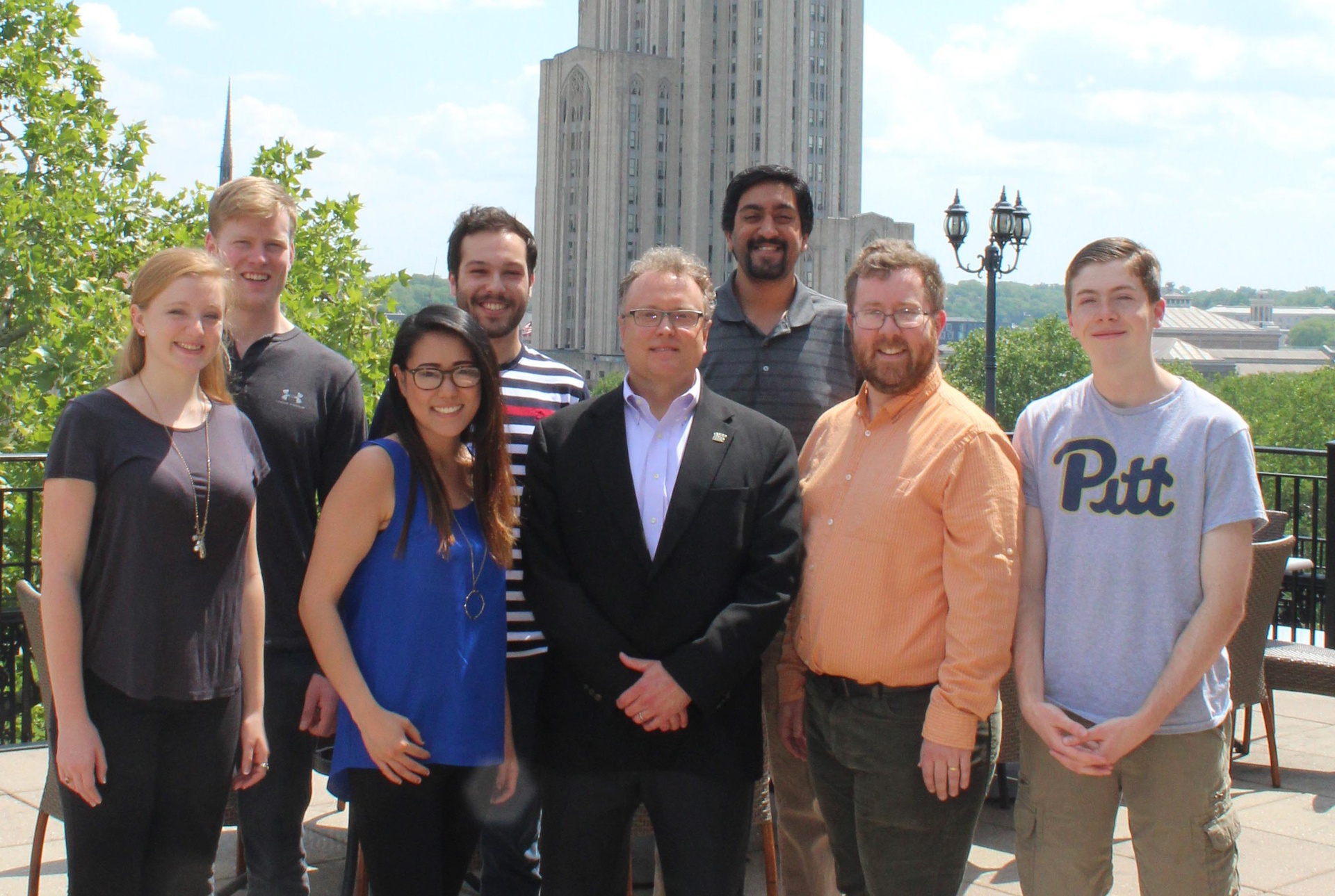 Members of the Vorp Lab, including Kickliter on the right.

PITTSBURGH (February 21, 2018) … Residents, fellows, postdocs, and medical students filed into the University Club to compete in the American Heart Association’s 26th annual Fellows Research Day poster session. Among this group of accomplished young researchers was Trevor Kickliter, a mechanical engineering sophomore in the University of Pittsburgh Swanson School of Engineering.

Kickliter works in the lab of David Vorp, Associate Dean for Research and the John A. Swanson Professor of Bioengineering, where he uses commercial and custom-built software to study vascular diseases. On a whim he decided to pick up some research that had been put on the back-burner, and what started as a side project in the lab turned out to yield interesting results that intrigued some of Vorp’s cardiologist collaborators.

Kickliter joined a group of researchers and began to look at how to detect reductions in the coronary arteries of pediatric patients. Other members of the research team include Aneesh Ramaswamy, a bioengineering graduate student researcher in the Vorp Lab; Brian Feingold, a pediatric cardiologist at UPMC; and Justin Weinbaum, research assistant professor of bioengineering at Pitt.

“Late failure remains a major cause of death after pediatric heart transplantations,” explained Kickliter. “When coronary arteries begin to narrow, it is a hint that heart failure may be imminent, and with pediatric patients, treatment is difficult when this reduction becomes severe.”

Kickliter said, “Cardiologists struggle to detect this gradual reduction on angiograms so our group decided to develop a tool to quantify the progression of coronary arteriopathy, thereby mitigating human error.” Vorp added, “Machine learning tools have well-established uses in biomedical image analysis, and Trevor recognized that such a tool could be used to overcome the limitations of current human analysis in this application.”

Kickliter and his team trained a convolutional neural network to automatically identify the arteries and any reductions that may be happening. “We collected 2D angiography data from pediatric patients following heart transplantation then selected and segmented individual frames to generate binary masks over the coronary arteries,” explained Kickliter. “These images and masks were used for the neural network, and the accuracy, precision, and area under the Receiver Operating Characteristic (ROC) curve -a plot of the true positive rate against the false positive rate- were used to assess its performance.”

Excited by the promising results, Feingold encouraged Kickliter to submit an abstract to the AHA’s Fellows Research Day.

The event’s poster session was judged by some of the region’s leading physicians and scientists. Though he faced competition from more experienced researchers, Kickliter, one of the youngest participants, won 2nd place and $250 in the clinical science category.

“When Dr. Feingold suggested that we submit an abstract to the AHA Fellows Day, I was skeptical because my experience with these is that they are populated by very high-quality, polished MD residents and fellows, with an occasional post-doc,” said Vorp. “In most circumstances, I would not want one of my undergraduate researchers to be thrown to the wolves like this, but if anyone could handle the pressure, it would be Trevor. I am very proud of him and look forward to watching him continue to grow.”

The group plans to continue research on this project. “This was really preliminary work, and there is still a long way to go,” said Kickliter. “We plan to improve the algorithm and train our network on a larger dataset to improve its performance. In the end, we hope that our work will help prevent heart failure in future pediatric heart transplant recipients.”