One of the three shower stalls in the INHALE Lab, led by Sarah Haig, which will study the effects of different shower head materials on opportunistic pathogen growth and exposure.
WaterHeaters2

Eight minutes is the average time an American spends in the shower, though no one is using these showers for their typical purpose. Instead, they’re part of the Investigating Home Water and Aerosols’ Links to Opportunistic Pathogen Exposure (INHALE) Lab, led by Sarah Haig, assistant professor of civil and environmental engineering at the Swanson School of Engineering.

Prior to joining the Swanson School, Haig worked with cystic fibrosis patients and their families, testing their plumbing for opportunistic pathogens (OPs) that could pose danger to their compromised immune systems, like nontuberculous mycobacteria (NTM) and Pseudomonas aeruginosa.

“Parents would ask me a lot of questions about how to clean their shower head and what kind of shower head helps limit bacterial growth and exposure. I didn’t have good answers for them—we just don’t know,” said Haig. “That was part of the inspiration for the INHALE Lab, where we can compare how materials and in-home disinfection strategies impact microbes so that we can find those answers. The research can empower the public to make their own decisions regarding reducing microbial exposure at the final point of exposure: the fixtures in their homes.” 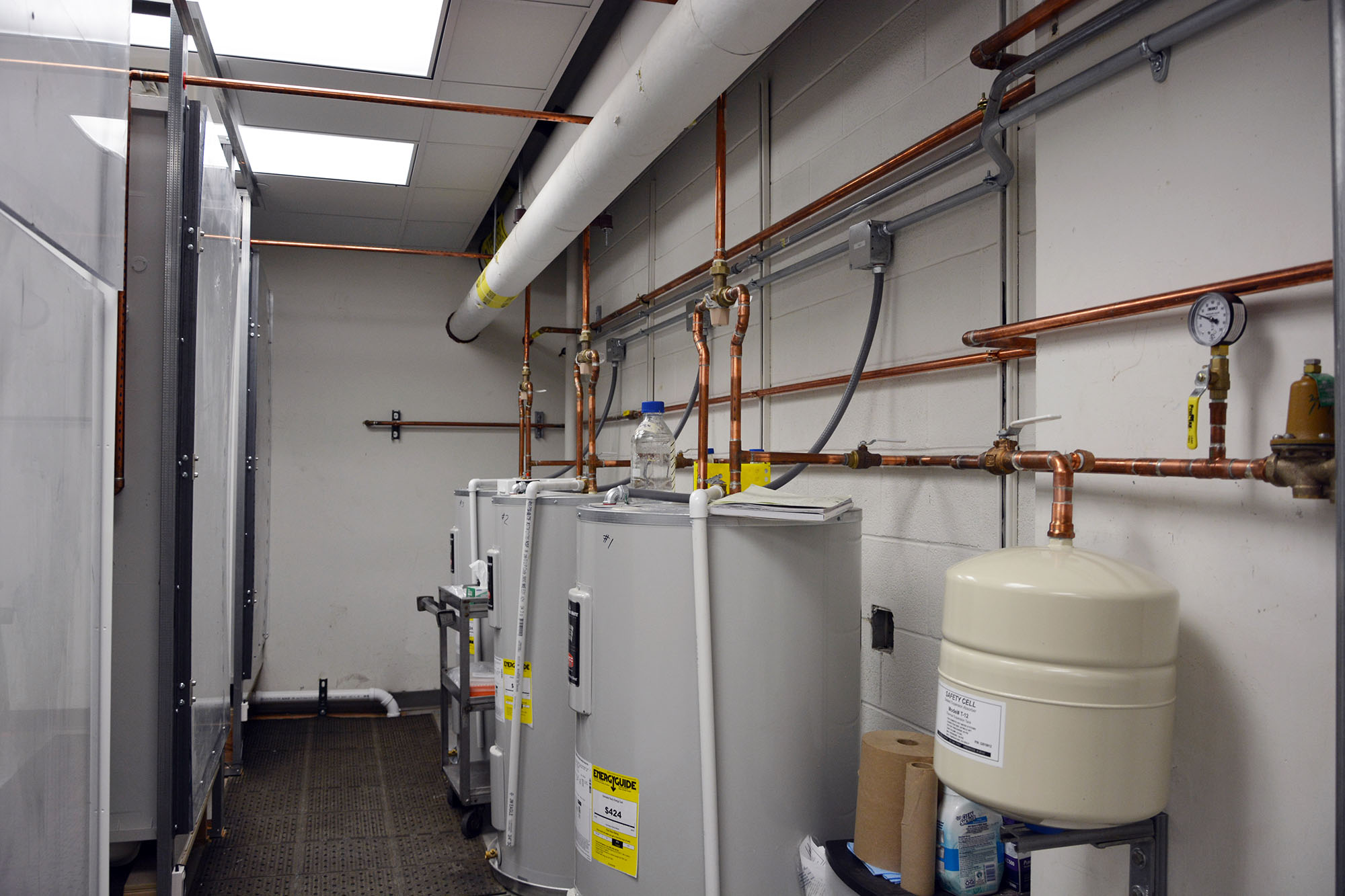 The 250 square foot lab has its own water heaters and its own plumbing. The shower heads are a mix of standard plastic and metal shower heads and shower heads embedded with antimicrobial silver. Because the lab is new and has sat idle since the lockdowns began in March 2020, the lines need to be flushed daily to condition the pipes—and to allow bacteria to take up residence—before research can begin again in earnest. However, several projects will utilize the lab’s unique capabilities.

One current project, funded by the National Science Foundation, will look at the effect of silver in shower heads on the OP Legionellaand whether antibiotic resistance is induced due to silver exposure.Another project, which has received seed grant funding from the Central Research Development Fund at Pitt, will examine the effectiveness of several prevention methods on the number of OPs that can become airborne when the shower is running—the most common way users are exposed to the OPs. The work will assess the effectiveness of disinfection strategies as well as different kinds of shower heads, including standard shower heads and ones modified with antimicrobial compounds or filtration devices.

“It’s a scary thought, one I’d bet you’d never had before: You might be taking a shower in waterborne pathogens!” said Janet E. Stout, president of the Special Pathogens Laboratory, research associate professor of civil and environmental engineering at Pitt, and internationally recognized expert on the management and control of waterborne pathogens. “The INHALE lab will help us understand the microbes in our showers, how they’re disseminated, and most importantly, how to control them under conditions that replicate your own shower.”

“For healthy individuals, these OPs are not generally a problem. Water is not—and isn’t meant to be—sterile. But for people who are immunocompromised or have existing pulmonary conditions, they can be deadly,” she noted. “Opportunistic pathogens are natural members of the water community, so you can’t feasibly eliminate them, but it’s a numbers game. When you reduce the number of pathogens, you can reduce your risk – we now just need to focus on understanding how to do this.”