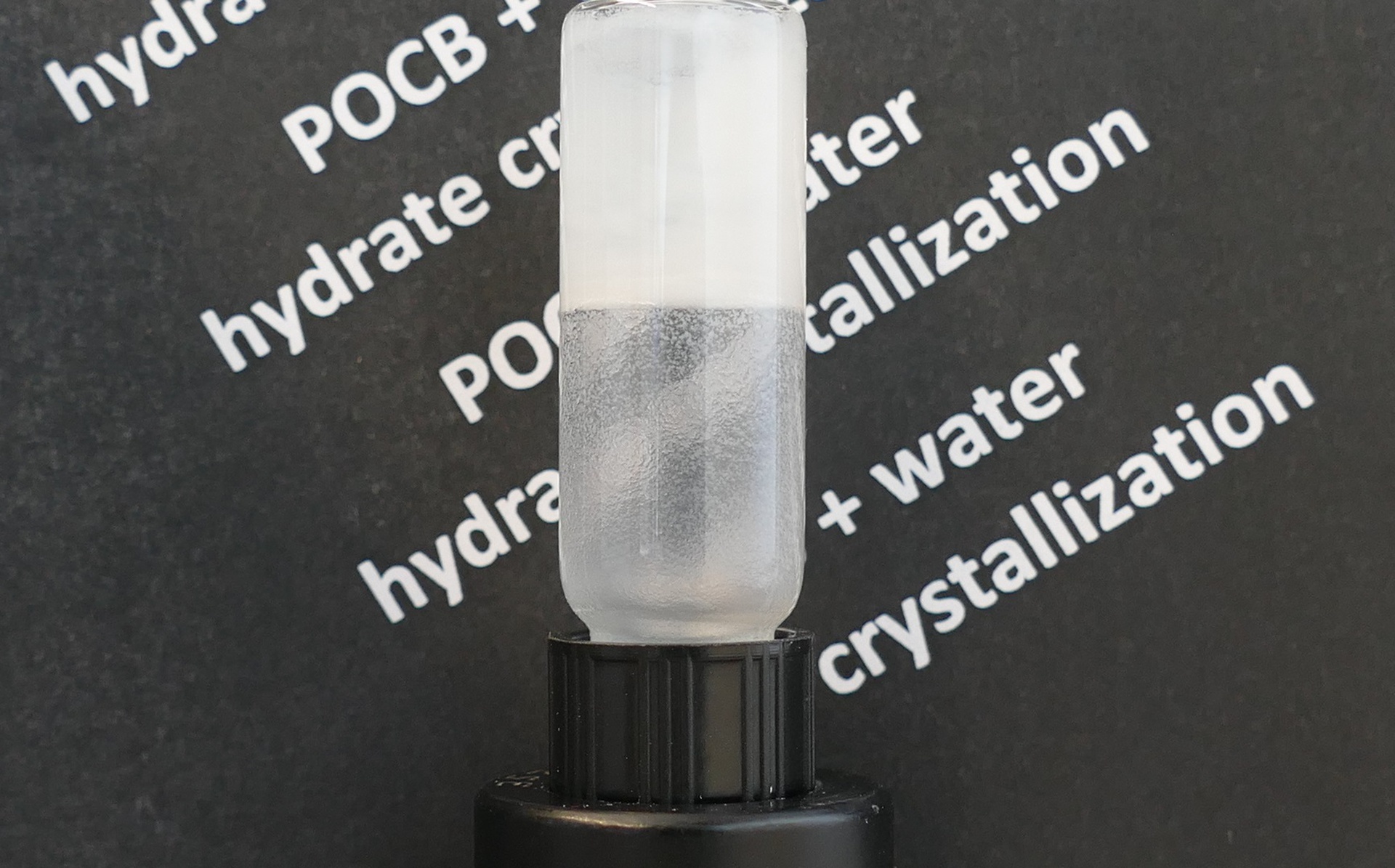 PITTSBURGH (October 2, 2018) … In Kurt Vonnegut’s sci-fi classic Cat’s Cradle, ice-nine is a substance capable of raising water’s melting point from 32 to 114.4 degrees Fahrenheit. Once in contact with water, it spreads instantly and indefinitely, leaving frozen oceans and chilling consequences in its wake. Luckily, as Vonnegut explains in the epigraph, ‘Nothing in this book is true.’ When he wrote the novel in 1963, he may have been right.

Researchers at the University of Pittsburgh have discovered the fantastic behavior of a liquid polymer capable of freezing water at room temperature. Beyond giving credence to Vonnegut’s prophetic imagination, the resulting mixture seemingly defies the second law of thermodynamics, which states that within an isolated system, entropy always increases.

“When you mix two pure components together, the entropy (or the degree of disorder), always increases,” explains John Keith, assistant professor of chemical engineering and Richard King Mellon Faculty Fellow in Energy at Pitt’s Swanson School of Engineering. “That disorder almost always causes mixtures to have a lower freezing point than either of the components individually, not higher.”

The mixture of salt and water, for example, freezes at lower temperatures than either salt or water individually. This quality makes salt well-suited for melting ice on roads and sidewalks in the winter. However, when a particular polymer—known as polyoxacyclobutane (POCB)— is mixed with water, it raises the mixture’s freezing point from 32 degrees Fahrenheit to about 100 degrees Fahrenheit. The researchers published their findings in the American Chemical Society (ACS) journal Macromolecules (DOI:10.1021/acs.macromol.8b00239).

The reaction is not altogether unprecedented. Mixing certain metals in specific proportions can create alloys that have higher melting points than the individual metals. Because alloys are comprised of at least two differently sized atoms, favorable combinations of atoms can weave together to make strong chemical bonds that counteract the second law of thermodynamics.

“This behavior, in which the mixture melts higher than its components, is well-known in metals. But it is very unusual, among non-metals,” says Sachin Velankar, associate professor of chemical engineering at Pitt and expert in polymer science. “To the best of my knowledge, POCB seems to be the only substance to display this behavior with water.”

POCB originally came to the university from chemical manufacturer DuPont as part of a research collaboration between the company and Professor Robert Enick, vice chair of research for the chemical engineering department. A graduate student working in Dr. Enick’s lab noticed the liquid polymer got cloudy when mixed with drops of water, but more curiously, the resulting combination—or “hydrate”—was a soft paste (similar to peanut butter) when a precise amount of water was added. Even more oddly, experiments on the material showed that well-ordered crystallites were forming between two liquids. 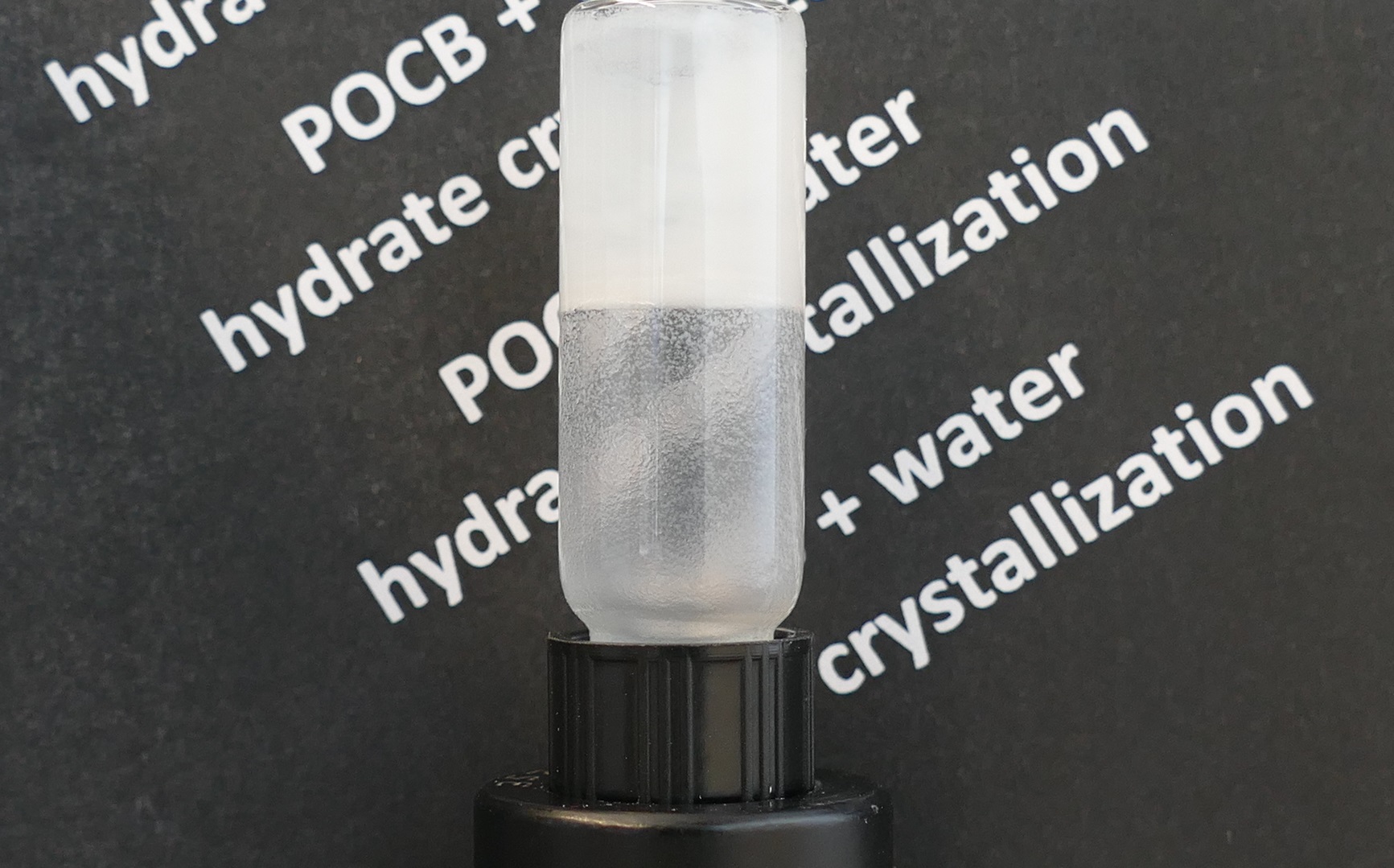 Image of the polymer-water mixture turned upside-down to show its solid state. Credit: Swanson School of Engineering/Sachin Velankar
Dr. Keith and colleagues used computer modeling to find a stable hydrate structure where water molecules thread themselves throughout the polymer to form hydrogen bonds that hold the material together like tiny zippers. “It takes less than an hour for the mixture to self-assemble at room temperature, and the final texture is like lip balm,” Dr. Keith says.

The Pitt researchers scoured scholarly journals to find scientific references to hydrates of POCB, which was produced by DuPont in the late 2000s with the name “Cerenol” because it’s made from corn (a “cereal” grain). At first their search came up short, but a conversation with Eric Beckman, Distinguished Service Professor of chemical engineering and co-director of Pitt’s Mascaro Center for Sustainable Innovation, tipped them off to other names the polymer might have been called in the past. Shortly after, the Pitt researchers found that the hydrate structure had already been discovered by a team of Japanese researchers in the late 1960s.

“The polymer goes by four or five names, and some are non-intuitive,” says Dr. Velankar. “After we found the previous studies, we realized that we had discovered an exciting facet of an old finding.”

The Japanese team, using similar X-ray techniques as those interpreted by Watson and Crick to identify the double helix in DNA, had found similar hydrate structures by melting high molecular weight forms of the polymer that were solid at room temperature. That study, which also appeared in ACS Macromolecules in 1970, has gone relatively unnoticed in the five decades since its publication. The innovation from the Pitt researchers is that similar hydrates can form spontaneously with lower molecular weight forms of the polymer that are liquid at room temperature, thus eliminating the need for melting before mixing with water.

“The polymer can also gently suck out humidity from the air naturally,” says Dr. Velankar. “We felt this behavior was a curiosity, but a very interesting one. Our research has been mostly a fundamental exploration of a very unusual phenomenon, but there are many potential applications to consider.”

The Pitt Engineering researchers have already collaborated with Alexander Star in Pitt’s Department of Chemistry to coat a nanotube electrode with the polymer to turn it into a computer memory device. The ACS journal Chemistry of Materials published the results of the study (DOI: 10.1021/acs.chemmater.8b00964).

One of the potential applications will certainly not be a doomsday device like Vonnegut’s ice-nine because POCB cannot spread instantly or indefinitely throughout water sources. Instead of triggering the apocalypse, researchers at the University of Pittsburgh think discovering this polymer’s freezing behavior could herald new innovations.

“Now that we know an example of a polymer-water mixture with these qualities, we can now search for other mixtures that might have other interesting properties,” says Dr. Keith. “I’m very optimistic that this is an exciting new class of crystalline materials that spontaneously form from mixtures of liquids.”