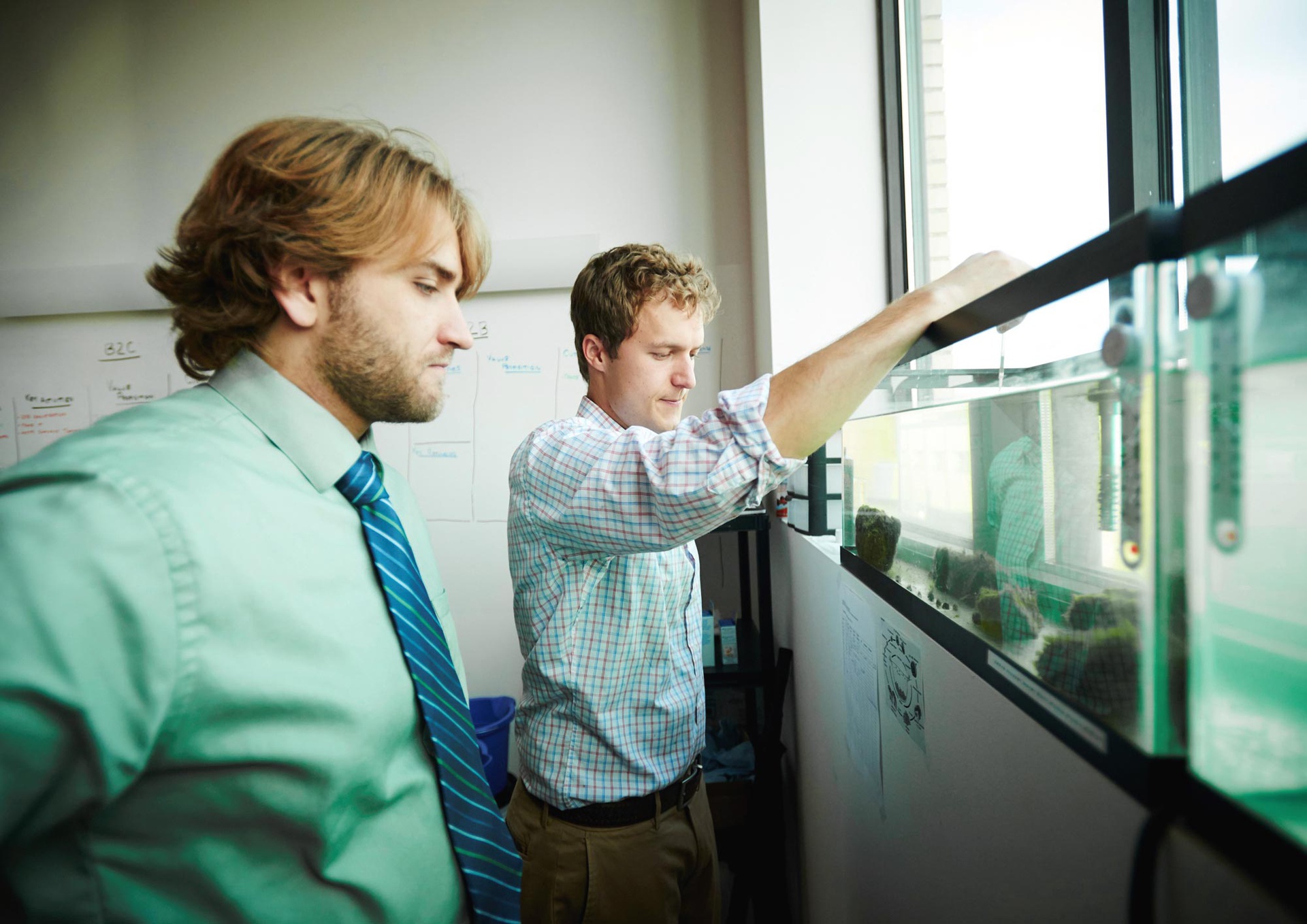 PITTSBURGH, PA (January 30, 2017) … With the new year comes a new class of honorees for Forbes’ 30 Under 30 ranking of young innovators and visionaries, and this year University of Pittsburgh Swanson School of Engineering alumni Noah Snyder and Kasey Catt were recognized for their work as founders of a coating and surface treatment startup. However, as with most entrepreneurs, they found that the trials and tribulations to bring one idea to fruition would actually serve as a lesson to bring a more successful product to market.

The idea for their company, Interphase Materials, started while Snyder and Catt were doctoral candidates in Pitt’s bioengineering program. They worked in the Neural Tissue Engineering Lab (NTE Lab) under advisor Tracy Cui, William Kepler Whiteford Professor of Bioengineering at Pitt.

“At the NTE Lab we investigate interactions between neural tissue and smart biomaterials,” explains Cui. “We research new tools to improve the performance of neural recording devices when implanted in tissue. Noah and Kasey, who we are proud to have as lab alumni, had a great impact on our research, but they had aspirations to take concepts from the lab and apply them directly to patients or other people in need.”

After participation in Pitt’s Coulter Translational Research Partners II Program, Snyder caught the entrepreneurial bug. He invited Catt to join him in the Innovation Institute’s Startup Pittblitz—a weekend-long dash for Pitt students to take a new business or product and make it ready to pitch to investors by Sunday afternoon. The two came up with an idea to apply a technology from their lab to the development of anti-microbial brain implants.

“The scientific approach of collecting lots of data and analyzing every detail differs greatly from the entrepreneurial mentality,” says Snyder. “When I started participating in some of the entrepreneurial programs offered at Pitt, I knew I wanted to take what we were working on in the lab and find a way to make it marketable, even if it meant making a lot of assumptions and discovering new things along the way.”

Their experience with Pittblitz encouraged them to enter the Randall Family Big Idea Competition, an annual startup competition helping Pitt students commercialize their ideas. Snyder and Catt tweaked their business plan to focus on dental implants and won the competition’s $25,000 top prize. They then entered Blast Furnace, a business accelerator for Pitt students, and won another first prize at the Wells Competition, both of which are offered by the Innovation Institute. At this time, they decided to make a critical pivot to the business.

“We realized registering dental implants with the Food and Drug Administration would be a long and difficult process. We also didn’t want to give away parts of the company to investors, so we knew we had to come up with something that would be self-sustaining in a short period of time. We wanted to make an impact on the world in two years, not 20,” says Snyder.

Snyder and Catt believed the technology behind the anti-microbial implants could also be used to develop a biochemical additive to prevent things like algae, mold and fungus from contaminating a wide variety of surfaces. They turned their eyes toward industry solutions and were accepted into Alphalab Gear, an early-stage seed investment fund supported by the state. They officially launched Interphase Materials with Snyder serving as CEO and president and Catt as the CTO.

From Inside the Brain to Outside the Box

Interphase Materials began promoting an industrial coating that protected pipelines, bridges and boats from contamination by marine life. According to Snyder, they quickly found a large potential market in tube and pipe coatings used for cooling power plants. They attracted the attention of construction and manufacturing companies, but their reputation didn’t stop there. The United States Navy offered them a contract to develop coating solutions for nuclear submarines.

Although they are trying to balance all of the possibilities for Interphase Materials with a focused business model, Snyder says he’s happy where the business is right now—in terms of both growth and geographical location.

“Kasey and I both have roots in western Pennsylvania, and we wanted to keep the company in the region,” explains Snyder. “Pittsburgh is one of the best places to be for the coating industry. PPG Industries, the largest coating company in the world, is headquartered here. Four of the top five largest coating companies internationally are located in Pennsylvania and Ohio. There is a huge talent pool. It’s like the Silicon Valley of advanced materials.”

The Forbes 30 Under 30 list comprises 20 industries, ranging from science and technology to art and entertainment, and seeks to “embrace the optimism, inventiveness and boldness of youth.” Tasked with investigating more than 15,000 applicants, a team of 80 judges and 50 staff reporters and editors made the final decisions about the honorees.

“After submitting the application to Forbes, I noticed my LinkedIn profile was getting a lot more views by people associated with the magazine,” Snyder says. “I think they were initially interested in us because we started out with brain implants and ended up working on nuclear subs, but all of the information about our business online helped. The University did a good job of supporting us and showcasing us along the way, which also helped us to realize that we could succeed. A lot of people were counting on us at Pitt. Now we have a whole new set of expectations we want to live up to.”

Snyder and Catt continue to collaborate with researchers at the University of Pittsburgh on the development of medical implants that are more compatible with the body and the immune system; however, their primary focus, Snyder admits, is the success of Interphase Materials.