‘Zooming’ to the Finish Line 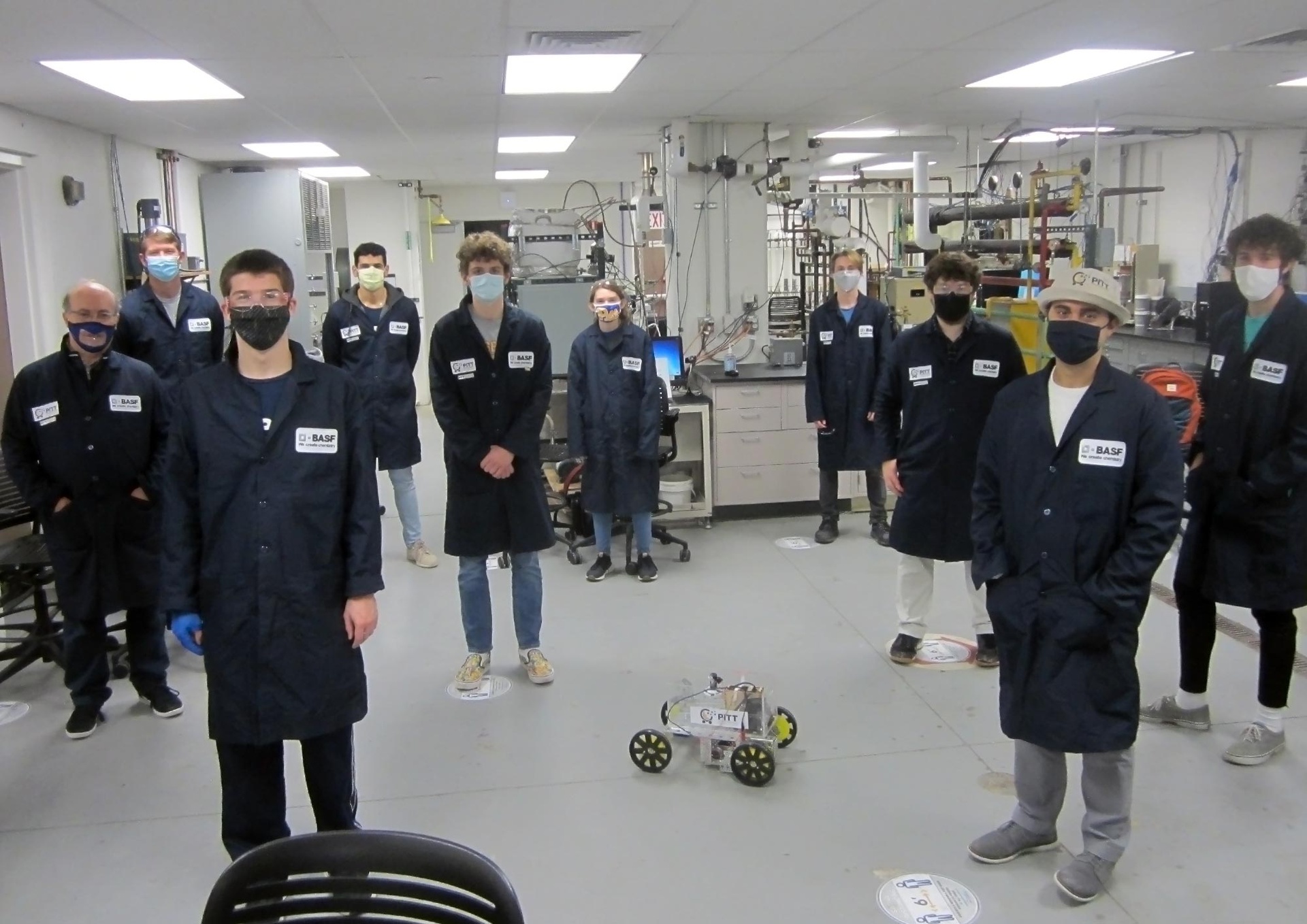 Pitt's Chem-E-Car team, pictured, in the lab with the car they designed and built. The team recently qualified for the International Competition.

UPDATE (Nov. 17, 2020) — The Pitt Chem-E-Car team competed virtually at the AIChE Annual Student Conference’s International Chem-E-Car Competition on Nov. 15. After noticing the fuel cell was malfunctioning in October’s regional competition, the team had to redesign the car around a different propulsion mechanism—a lead acid battery—just 24 hours before the competition. With their new design approved, the team completed their runs, bringing home the Sportsman Award for their perseverance and the First Place Chem-E-Car Video Award.

“I am incredibly proud of the team—they faced so many challenges and obstacles this year, with limited time to work on the car due to COVID-19,” remarked the team’s advisor Taryn Bayles, vice chair of undergraduate education and professor of chemical and petroleum engineering at Pitt. “I am most impressed with their determination to completely redesign their car less than 24 hours before the competition.”

PITTSBURGH (Nov. 2, 2020) — Preparing for a car race without knowing how far you have to go is a difficult test of skill. It’s even more demanding when you have to compete virtually.

A team of students from the University of Pittsburgh’s Swanson School of Engineering met that challenge in October when their model car – propelled by a chemical mix of their own creation – finished fourth in the regional leg of the Chem-E-Car Competition, qualifying them for the international finals on Nov. 15.

The annual Chem-E-Car Competition, sponsored by AIChE, the global association of chemical engineers, requires student teams to create a small car with chemical propulsion and stopping mechanisms that allow it to travel a specified distance and carry a payload (0-500 mL of water).

While team members construct the vehicle ahead of time, they only find out the specific requirements for distance and payload an hour before the competition. This year, the cars needed to travel 45 feet and carry 0 mL of water—and for the first time, they had to do so remotely.

The team’s car, named “Hydro-Man,” was propelled by a hydrogen fuel cell. The car itself looks like an open, clear box sitting atop its chassis and four wheels. The team used an electrolyzer to produce hydrogen, which is stored in a balloon until the car is ready to be powered. To stop, the car has a “chemical circuit breaker,” a magnesium ribbon that breaks the electrical current and stops the car.

The team calculated the precise amount of each material to ensure the car traveled the necessary distance and stopped as close to the finish line as possible. The calculations also had to account for the empty payload the car would carry for this competition.

Prior to COVID-19 quarantines and in-person labs, the team would use the spring semester to design and build the car for the fall competition. The COVID-19 pandemic forced the competition to be held virtually, leaving teams to set up and record their submission themselves.

A team’s 20-30 members would typically have a whole semester to work together in the lab designing the cars. This year, the team had one week in a lab that could only safely accommodate 8-10 members at a time.

Team member Clay Countess, a senior majoring in chemical engineering, praised Taryn Bayles, the team’s faculty advisor, for her commitment to the competition. “Dr. Bayles had to be there with us in the lab the whole time we were building,” he said. “I’m proud of what we did. We were very happy with how we managed to pull this off.”

Prior to the competition, all teams had to complete safety training and testing and submit an engineering documentation package. Teams also had to produce a poster detailing the research they conducted for the creation of their car, then pass the safety inspection to ensure that their car will compete safely.

This year, Joaquin Rodriguez, assistant professor of chemical engineering at Pitt, served as the safety inspector, inspecting the car on video and submitting the findings to the judges.

“We had to do a month’s work in five days,” said Nick Hages, team member and senior majoring in chemical engineering. “After that, we had a month to prepare for the virtual competition, and the team members who couldn’t physically be in the lab prepared for the other elements of the competition, like the poster competition.”

On competition day, the team had to set up their start and stop lines, as well as a designated work station where members could work with the chemicals and prepare the car.

“Luckily a few of us had gone to competitions before, so we knew how things were usually set up,” said Hages.

“All in all, this was the best we could hope for,” added Countess.

This is the second year in a row that the team has qualified for the International Competition, finishing 12th overall and winning the Chem-E-Car Poster Competition last year.

Pitt’s team will join around 40 other teams to compete at the AIChE Annual Meeting, which will take place virtually on Nov. 15.

“I’m so proud of what the team has accomplished, especially under such challenging conditions,” said Bayles, vice chair of undergraduate education and professor of chemical and petroleum engineering at Pitt. “Their hard work paid off, and I look forward to seeing them succeed again at the International Competition.”

‘Zooming’ to the Finish Line