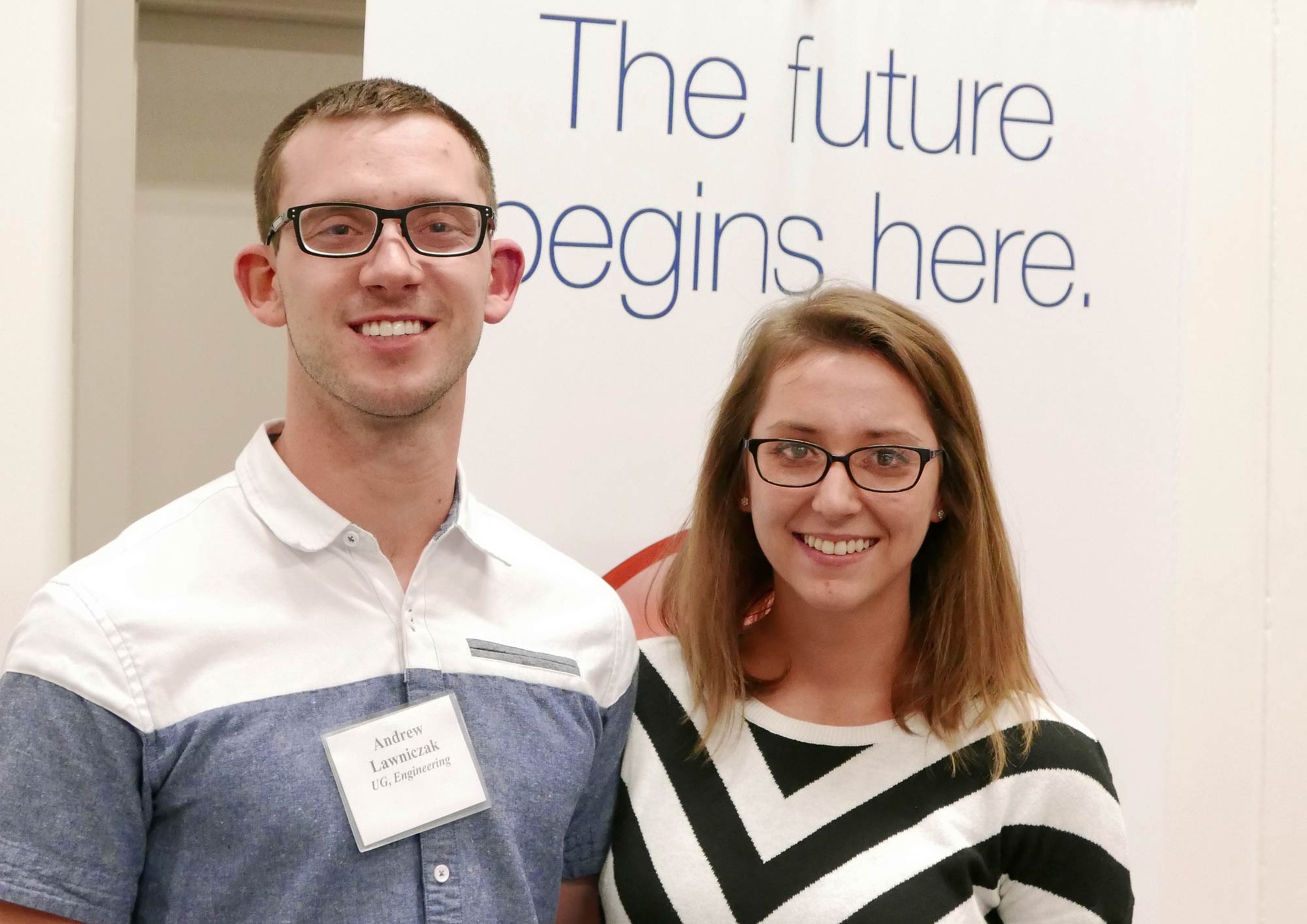 John Frazer, a graduate student at the Graduate School of Public and International Affairs, was not planning to spend Homecoming weekend holed up in the Pitt Innovation Institute's business accelerator space.

But when his fellow GSPIA classmates Lujing Gao and Nicole Xu asked if he would help refine their idea for the Startup PittBlitz business plan competition, he was intrigued.

A transformative 24-hours later, Frazer, Gao and Xu each pocketed a third of the $1,500 top prize and have been accepted in the Innovation Institute's Blast Furnace accelerator program where they will further develop their idea over the next eight weeks for potential commercialization. Additionally,  the trio will receive two hours of free legal consulting from startup lawyer, F.J. Lucchino of Lucchino Law .

"I have always wanted to try something entrepreneurial, but didn't think I had the time, and I was unaware of the Innovation Institute and all that it does to support Pitt entrepreneurs," Frazer said. "Lujing, Nicole and I sat down for dinner after the event and said, 'We might have something here. Let's go for this.' We're excited. We're talking about how we need to use the prize money to hire some programmers."

Their venture, which they call uTranslate, aims to be the Uber of language translation services by solving the problem of providing cost-effective translation services for customers, while offering students and others with language skills the opportunity to earn money in their spare time. Gao has worked as a translator and said that most agencies underpay the people who actually do the work.

Approximately 40 Pitt students participated in the StartUp PittBlitz program in the hopes of validating their start-up ideas and sacking some of the $4,000 in prize money to invest in getting their companies off the ground.

In the span of 24-hours, the students aligned in nine teams of 3-5 people each around fledgling business ideas, conducted market research, refined their value propositions and go-to-market strategies, developed product mock-ups, and rehearsed five-minute pitches to a group of seasoned veterans of Pittsburgh's business start-up scene.

"I am thrilled that our Pitt students are so enthusiastic about innovation and entrepreneurship," said Babs Carryer, director of education and outreach for the Innovation Institute. "The StartUp PittBlitz is designed as a fun way to bring them together to share ideas, and to help build a culture of innovation and entrepreneurship across the university. It is encouraging to see the cross-disciplinary appeal at the event, having attracted students from so many different schools and departments, as well as students of every level of experience, literally from freshman to postdoc."

Many of the student ideas centered on mobile phone apps, ranging from an app to make it easier for students to interact and socialize, to helping develop affordable weekly meal plans for people with dietary restrictions, to driving business during slow periods by delivering time-sensitive discounts.

One of the "celebrity" judges, Bobby Zappala, co-founder and CEO of East Liberty-based start-up accelerator Thrill Mill, complimented the students on their ingenuity.

"All of the ideas I saw are solid, and you all responded well to some very tough questions," he said. "It's hard to pitch a business when you don't have time to practice, so for you all to get up here today and do as well as you did is amazing."

Rounding out the winners are Food Chain ($900), which has developed an app to compete against Yelp in the restaurant review space using geolocation to eliminate fake reviews, NutriBliss ($300) which is an app to help people with dietary restrictions plan meals and save money by using machine learning algorithms to search out discounts at multiple grocery stores, and Namesake ($300), which has designed an integrated personalized information sharing service for professional networking.

The toughest judge during the pitch phase of the event was Rick Cancelliere, a Pitt alumnus and founder and CEO of Treatspace, a developer of software for healthcare providers, who announced his company, launched in 2012, had just closed a $2.7 million round of venture capital funding.

During the Q&A after each pitch, Cancelliere picked apart business model assumptions and demanded to know how the students' ideas differed from existing players in the market.

Cancelliere told all of the teams, including those not chosen for prizes, to not give up on their ideas, especially since many of them were only a day old. He explained how the idea for Treatspace has evolved over several years and described how it took several attempts for his company be accepted into the AlphaLab business accelerator program.

"Innovation is hard. It's messy. What you are doing is trying to disrupt the marketplace and take somebody else's money, or create a market that doesn't yet exist," he said. "My goal is not to shut you down, but to make you better."

Greg Coticchia, executive-in-residence at the Innovation Institute and director of the Blast Furnace accelerator program, said the addition of uTranslate and Re-CYCLE to the Blast Furnace brings the number of teams for the current program to 20.

"The spirit of entrepreneurship is alive and well at Pitt, and we look forward to working with these students to bring their ideas to life."

Graduates of the Blast Furnace program will have the opportunity to compete in the second semester for the Randall Family Big Idea competition, funded by Pitt Trustee Robert P. Randall, which provides $100,000 in prize money, including a $25,000 top prize, for student-developed Pitt business ventures.

The "Cellular" Network
Extending an Alliance of Innovation
Gut in a Capsule - The Microbiome as Medicine
ME professor receives award for work in carbon capture
A Step Toward Decarbonizing the Chemical Industry
Students devote summer to sustainability research
Some modules are disabled because cookies are declined. Accept cookies to experience the full functionality of this page.
ACCEPT COOKIES
We use cookies to optimize the website, no personal information is stored. Learn more
DECLINE COOKIES ACCEPT COOKIES