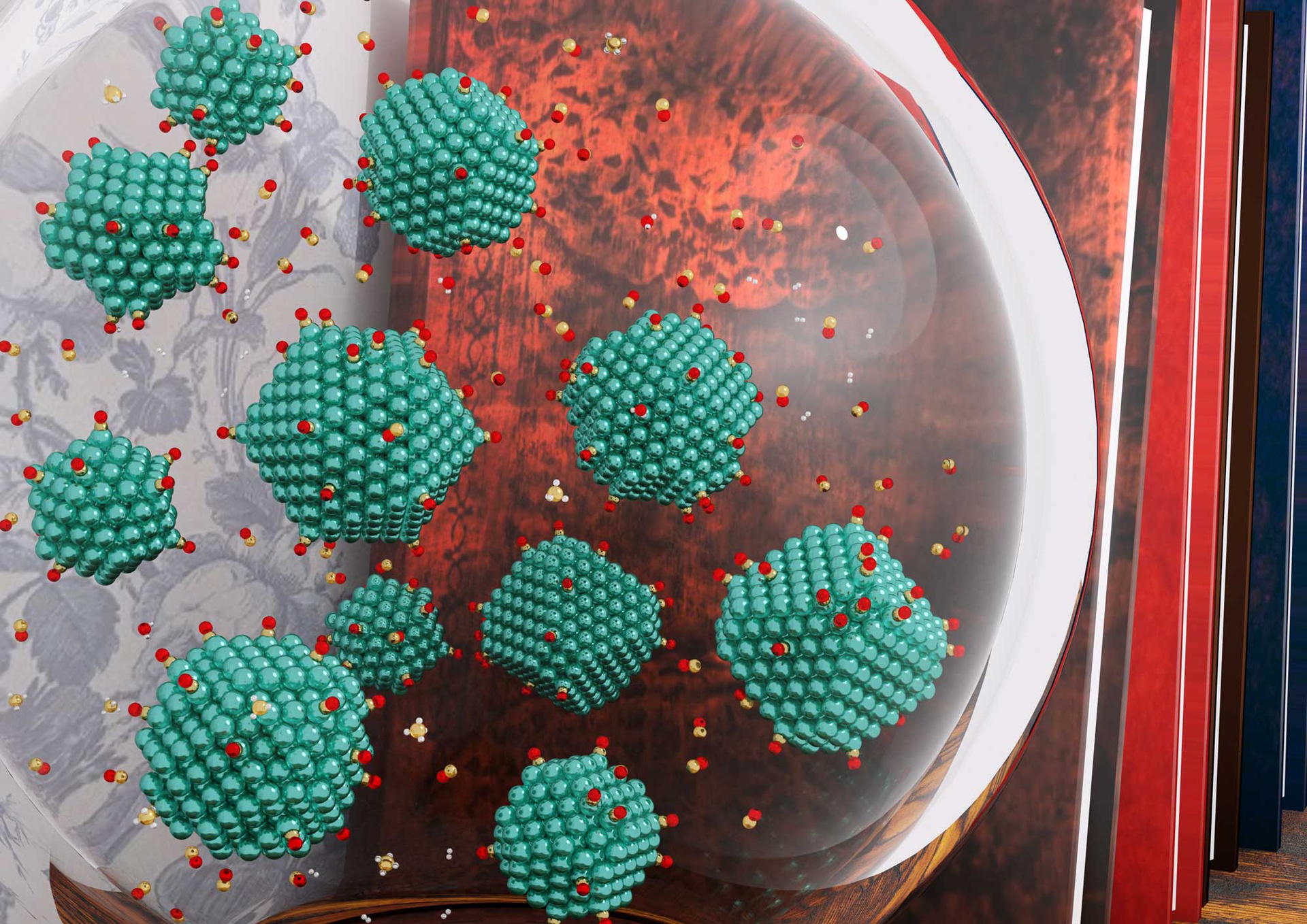 An illustration of nanoparticles under reaction conditions was featured on the cover of ACS Catalysis.

PITTSBURGH (June 9, 2020) — Computational catalysis, a field that simulates and accelerates the discovery of catalysts for chemical production, has largely been limited to simulations of idealized catalyst structures that do not necessarily represent structures under realistic reaction conditions.

New research from the University of Pittsburgh’s Swanson School of Engineering, in collaboration with the Laboratory of Catalysis and Catalytic Processes (Department of Energy) at Politecnico di Milano in Milan, Italy, advances the field of computational catalysis by paving the way for the simulation of realistic catalysts under reaction conditions. The work, published in ACS Catalysis, was authored by Raffaele Cheula, PhD student in the Maestri group; Matteo Maestri, full professor of chemical engineering at Politecnico di Milano; and Giannis “Yanni” Mpourmpakis, Bicentennial Alumni Faculty Fellow and associate professor of chemical engineering at Pitt.

“With our work, one can see, for example, how metal nanoparticles that are commonly used as catalysts can change morphology in a reactive environment and affect catalytic behavior. As a result, we can now simulate nanoparticle ensembles, which can advance any field of nanoparticles application, like nanomedicine, energy, the environment and more,” says Mpourmpakis. “Although our application is focused on catalysis, it has the potential to advance nanoscale simulations as a whole.”

“Catalysis is behind most of the important processes in our daily lives: from the production of chemicals and fuels to the abatement of pollutants,” says Maestri. “Our work paves the way towards the fundamental analysis of the structure-activity relation in catalysis. This is paramount in any effort in the quest of engineering chemical transformation at the molecular level by achieving a detailed mechanistic understanding of the catalyst functionality. Thanks to Raffaele’s stay at Pitt, we were able to combine the expertise in microkinetic and multiscale modeling of my group with the expertise in nanomaterials simulations and computational catalysis of Yanni’s group.”

Lead author Raffaele Cheula, a PhD student in the Maestri Lab, worked for a year in the Mpourmpakis Lab at Pitt on this research.

“It has been very nice to be involved in this collaboration between Yanni and Matteo” says Cheula. “The combination of my research experiences at Pitt and at PoliMi has been very important for the finalization of this work. It was a challenging topic and I am very happy with this result”.

The work is funded by National Science Foundation and the European Research Council, and with computational support from the Center for Research Computing at Pitt and CINECA in Bologna, Italy.

The paper, “Modeling Morphology and Catalytic Activity of Nanoparticle Ensembles Under Reaction Conditions,” was published in ACS Catalysis and featured on the cover of the print edition.