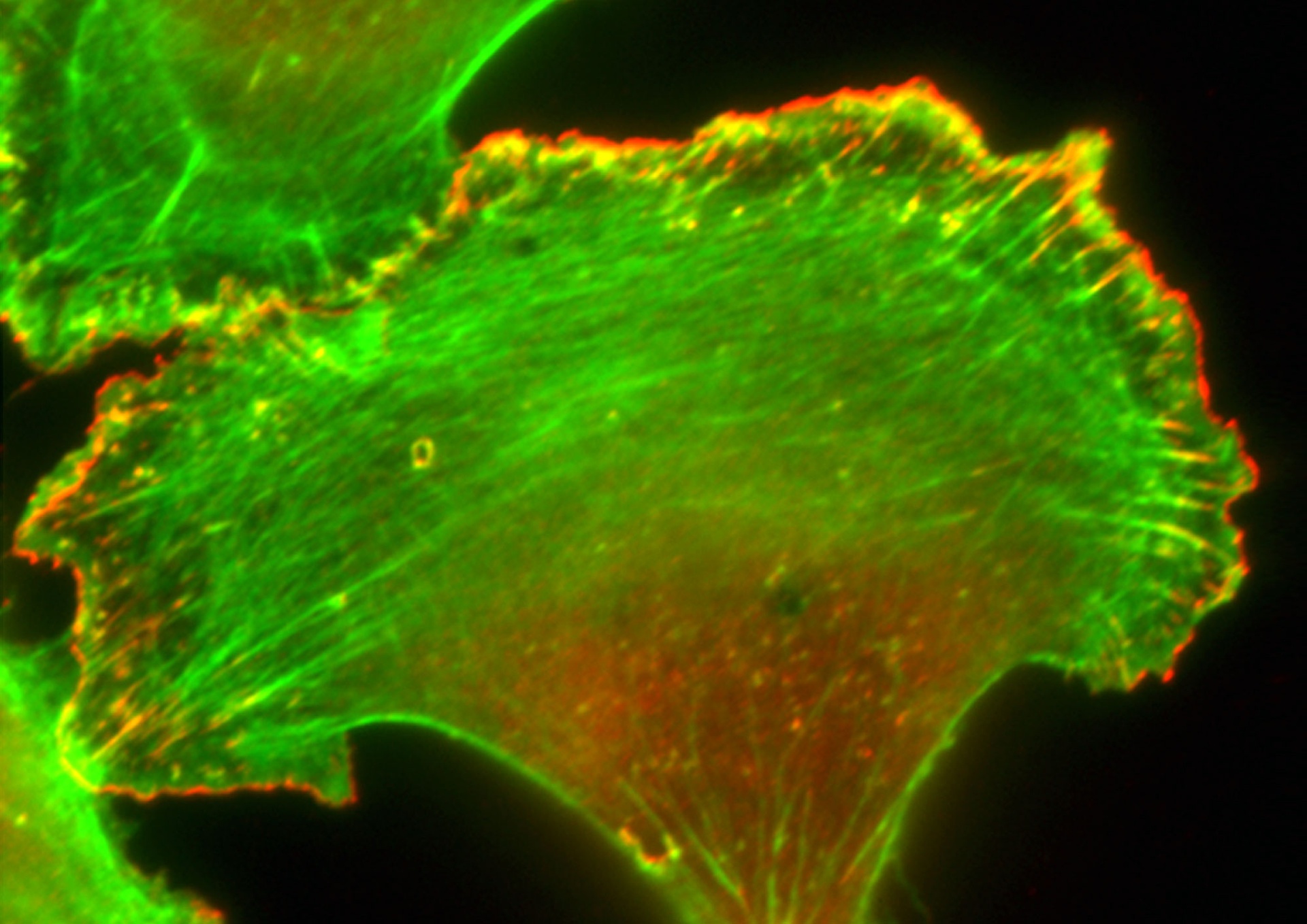 Image of a cell and the actin cytoskeleton fluorescently labeled. (Credit: Roy Lab)

PITTSBURGH (Oct. 21, 2020) … Animals, plants, fungi, and protozoans all have eukaryotic cells, and the cytoskeleton in these systems plays an important role in cell shape, movement, and division. Disruption in this complex network of protein filaments can lead to cell and organ dysfunction.

The Journal of Biological Chemistry recently released a special virtual issue compiling a list of papers published in the journal over the last two years that represented the most exciting advances in the eukaryotic cytoskeleton field, and it features research from bioengineers at the University of Pittsburgh Swanson School of Engineering.

Partha Roy, associate professor of bioengineering at Pitt, leads a research group that studies cell migration and applies this fundamental knowledge to pathological conditions, such as cancer metastasis or excessive blood vessel formation. The lab’s article, “The VASP-profilin1 (Pfn1) interaction is critical for efficient cell migration and is regulated by cell-substrate adhesion in a PKA-dependent manner,” was selected for the JBC virtual issue.

“This study looked at the fundamental process of how cells move and the signaling pathway that regulates it,” said Dr. David Gau, postdoctoral associate in the Roy Lab and the first author on the paper.

In protrusion, a cell attempts to reach out and attach itself to a surface so that it can propel forward. Roy’s group studied how interaction between two important actin-binding proteins -- profilin and VASP -- might be regulated during cell movement.

“We proposed a mechanism on how these two proteins interact with each other based on the adhesive state of the cells,” said Gau. “We showed that when these two proteins are interacting, it promotes actin polymerization, which then allows cells to make protrusions and move.

Understanding this fundamental cell process may help reveal ways to reduce aggressive cell movement or impact other cellular dysfunction. Roy’s lab continues to work in this area by studying how these types of protein interactions promote cancer metastasis or blood vessel formation. Given the importance of these types of actin-binding proteins in cancer, Gau is also looking at mechanisms to regulate the cellular levels of these proteins.