Research team from Pitt, Harvard and McMaster combines optics, chemistry and materials to use light to manipulate light

Schematic representation of optical self-trapping within SP-functionalized hydrogels with two remote beams; each beam is switched on and off to control the interaction. (Aizenberg/Saravanamuttu Lab. Proceedings of the National Academy of Sciences Feb 2020, 201902872; DOI: 10.1073/pnas.1902872117)

PITTSBURGH (February 24, 2020) … Advances in biomimicry – creating biological responses within non-biological substances – will enable synthetic materials to behave in ways that were typically only found in Nature. Light provides an especially effective tool for triggering life-like, dynamic responses within a range of materials. The problem, however, is that the applied light is typically dispersed throughout the sample and thus, it is difficult to localize the bio-inspired behavior to the desired, specific portions of the material.

A convergence of optical, chemical and materials sciences, however, has yielded a novel way to utilize light to control the local dynamic behavior within a material. In a general sense, the illuminated material mimics a vital biological behavior: the ability of the iris and pupil in the eye to dynamically respond to the incoming light. Furthermore, once the light enters the sample, the material itself modifies the behavior of the light, trapping it within regions of the sample.

The latest research from the University of Pittsburgh’s Swanson School of Engineering, Harvard University and McMaster University, reveals a hydrogel that can respond to optical stimuli and modify the stimuli in response. The group’s findings of this opto-chemo-mechanical transduction were published this month in the Proceedings of the National Academy of Sciences (DOI: 10.1073/pnas.1902872117).

“Until only a decade or so ago, the preferred state for materials was static. If you built something, the preference was that a material be predictable and unchanging,” Dr. Balazs explained. “However, as technology evolves, we are thinking about materials in new ways and how we can exploit their dynamic properties to make them responsive to external stimuli.

“For example, rather than programming a computer to make a device perform a function, how can we combine chemistry, optics and materials to mimic biological processes without the need for hard-wired processors and complex algorithms?”

The findings continue Dr. Balazs’ research with spiropyran (SP)-functionalized hydrogels and the material’s photo-sensitive chromophores. Although the SP gel resembles gelatin, it is distinctive in its ability to contain beams of light and not disperse them, similar to the way fiber optics passively control light for communication. However, unlike a simple polymer, the water-filled hydrogel reacts to the light and can “trap” the photons within its molecular structure.

“The chromophore in the hydrogel plays an important role,” she explains. “In the absence of light, the gel is swollen and relaxed. But when exposed to light from a laser beam about the width of a human hair, it changes it structure, shrinks and becomes hydrophobic. This increases the polymer density and changes the hydrogel’s index of refraction and traps the light within regions that are denser than others. When the laser is removed from the source, the gel returns to its normal state. The ability of the light to affect the gel and the gel in turn to affect the propagating light creates a beautiful feedback loop that is unique in synthetic materials.”

Most surprisingly, the group found that the introduction of a second, parallel beam of light creates a type of communication within the hydrogel. One of the self-trapped beams not only controls a second beam, but also the control can happen with a significant distance between the two, thanks to the response of the hydrogel medium. Dr. Yashin notes that this type of control is now possible because of the evolution of materials, not because of advances in laser technology.

“The first observation of self-trapping of light occurred in 1964, but with very large, powerful lasers in controlled conditions,” he said. “We can now more easily achieve these behaviors in ambient environments with far less energy, and thus greatly expand the potential use for non-linear optics in applications.”

The group believes that opto-chemo-mechanical responses present a potential sandbox for exploration into soft robotics, optical computing and adaptive optics.

“There are few materials designed with a built-in feedback loop,” Dr. Balazs said. “The simplicity of the responses provides an exciting way to mimic biological processes such as movement and communication, and open new pathways toward creating devices that aren’t reliant on human control.”

This research was supported in part by the US Army Research Office under Award W911NF-17-1-0351 and by the Natural Sciences and Engineering Research Council, Canadian Foundation for Innovation.

Schematic representation of optical self-trapping within SP-functionalized hydrogels with two remote beams; each beam is switched on and off to control the interaction. (Aizenberg/Saravanamuttu Lab. Proceedings of the National Academy of Sciences Feb 2020, 201902872; DOI: 10.1073/pnas.1902872117) 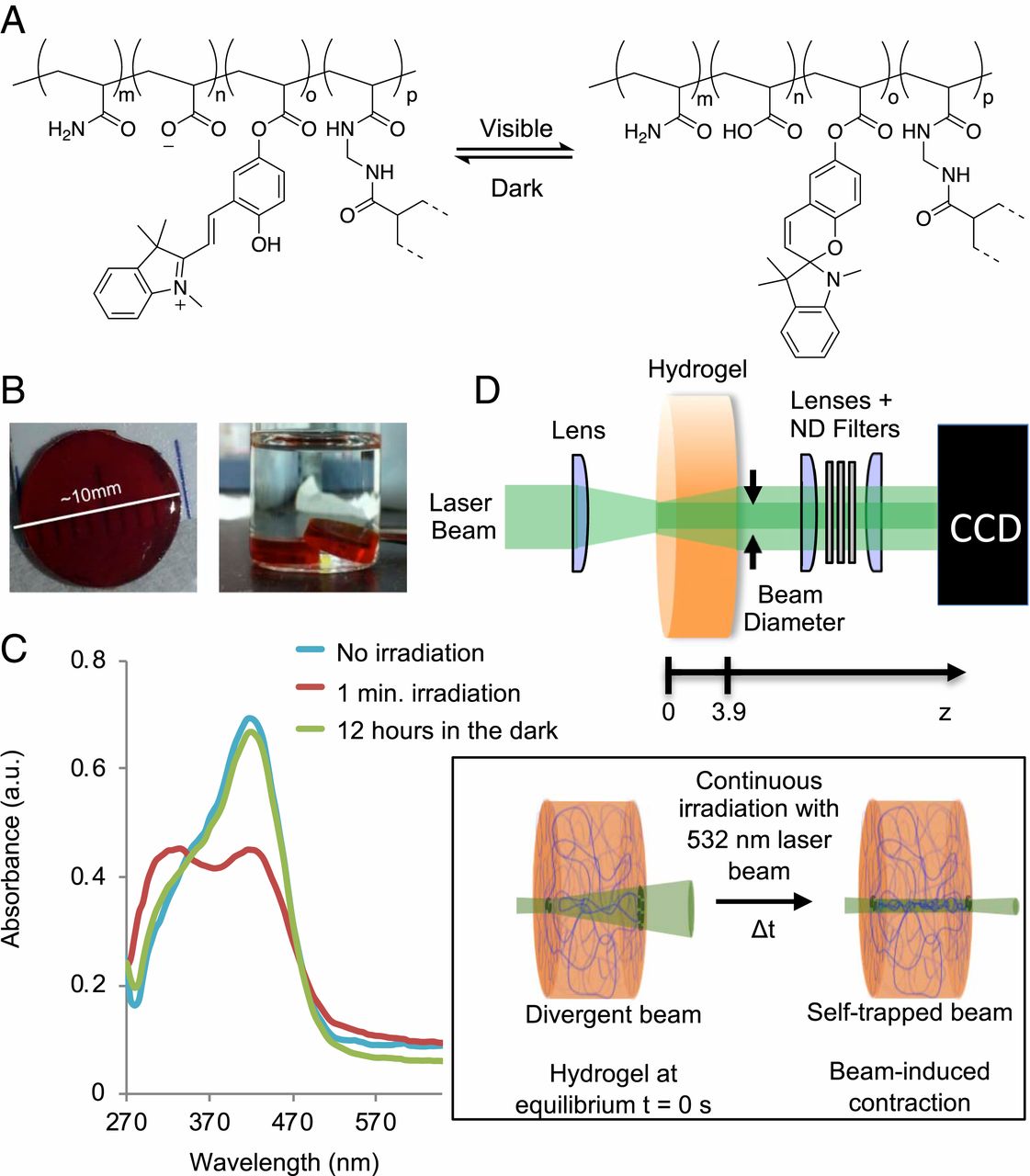 SP-modified hydrogels. (A) Photoisomerization scheme of chromophore substituents from the protonated merocyanine (MCH+, Left) to SP (Right) forms in the methylenebis(acrylamide) cross-linked p(AAm-co-AAc) hydrogel. (B) Photographs of chromophore-containing p(AAm-co-AAc) hydrogel monoliths employed in experiments. (C) UV-visible absorbance spectra demonstrating reversible isomerization of MCH+ (absorption λmax = 420 nm) to SP (λmax = 320 nm) in solution. (D) Experimental setup (Top) to probe laser self-trapping due to photoinduced local contraction of the hydrogel, schematically depicted on the Bottom (see also Movie S1). A laser beam is focused onto the entrance face of the hydrogel while its exit face is imaged onto a CCD camera. (Aizenberg/Saravanamuttu Lab. Proceedings of the National Academy of Sciences Feb 2020, 201902872; DOI: 10.1073/pnas.1902872117)