COVID-19 has left the University and world at large in an unprecedented situation. This situation introduced many new challenges for all, including how to adapt classes such as Senior Design, which is largely based on teamwork, to a remote setting.

In addition to the normal challenges and problem solving nature of a given course, the stay-at-home order created an added challenge for this semester’s Senior Design teams; how to reclaim a project in the middle of the semester when you are no longer able to come to campus.

One team was able to engineer a creative solution.  The team’s sponsor is Abram’s Nation. They produce hospital bed equipment, and due to their essential status, they are still open for business during this time.  Abram’s Nation is a long-time partner and friend of the University of Pittsburgh, particularly the Swanson School of Engineering.

Abram's Nation makes medical-grade safety beds that provide those with special needs or dementia a safe and fully enclosed sleeping space. Their current product line under The Safety Sleeper® brand is designed to keep the occupant safe from night wandering and reduce risks from uncontrolled movement, falls, and self-harming behavior such as headbanging.

The current model of The Safety Sleeper is effective for regular mattresses and has a rigid frame. This frame imposes limitations on where the current design can be used. In 2019, Abram’s Nation completed an internal design and process overhaul of their main product lines. It was here the company realized there was a need to create a device compatible with an articulating base bed.

Craig Van Korlaar, Director of Operations at Abram’s Nation was the design team’s point of contact.  He said, “We hope to bring an articulating model to market in late 2020/early 2021, but also knew that we did not have the skills or capacity to accomplish the frame design on our own. By once again partnering with Pitt on the frame, we have been able to stay on track with this timeline.” 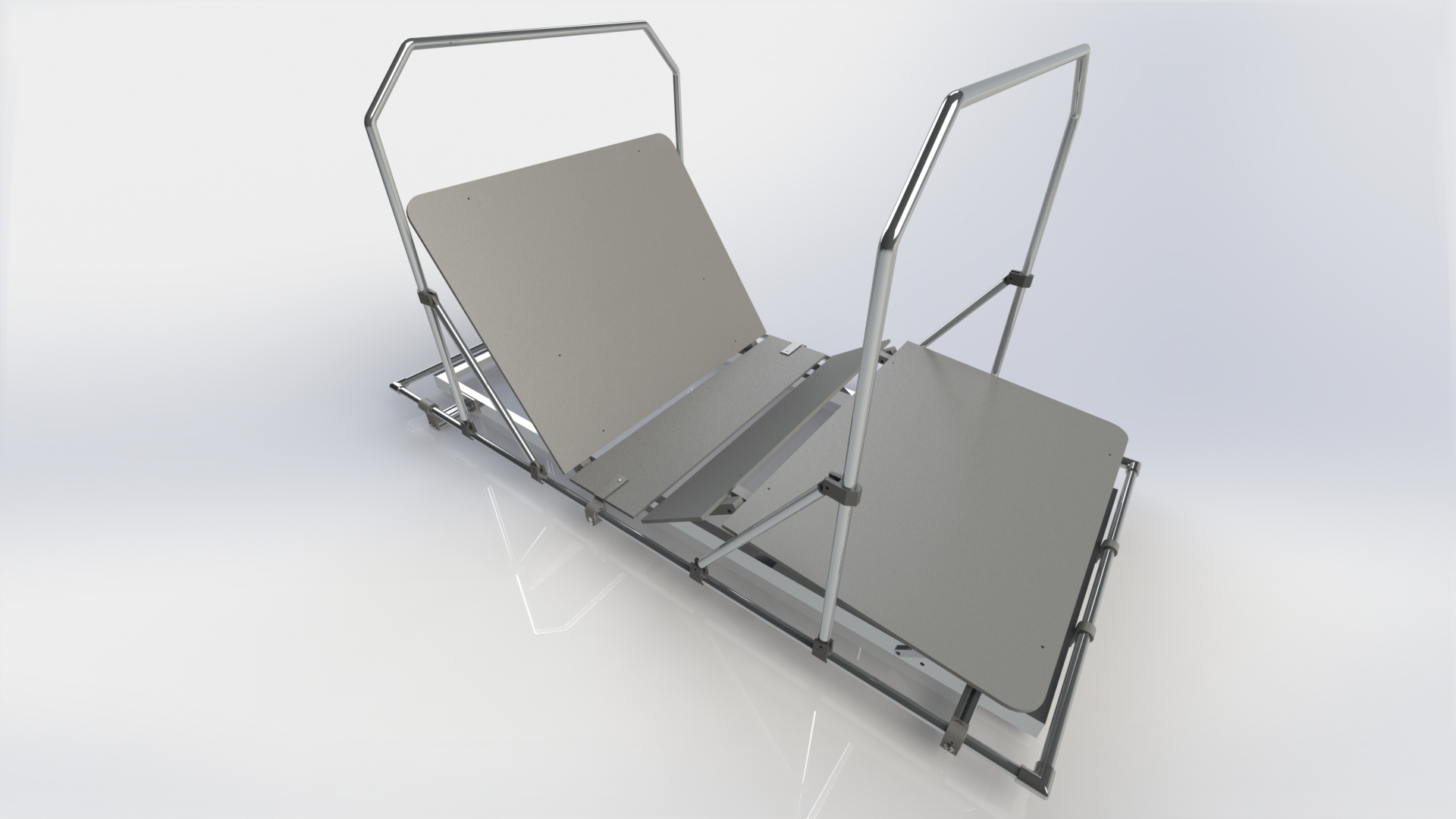 3D model of the team’s design.

The senior design team’s original goal was to expand on the current model of The Safety Sleeper to create a product capable of interfacing with hospital and facility beds. The results were planned to be a full-scale prototype, fitting the dimensions of the bed and to be able to handle the articulation of the bed without sacrificing the integrity of The Safety Sleeper enclosure.

Early into the project, the team ran into its first challenge. Due to legal issues, the team was unable to see a hospital bed and acquire the necessary measurements until five weeks into the semester. So instead, the team worked from an articulating bed frame supplied by Abram’s Nation located at the company’s manufacturing facility. Team coordinator and ME major, Matthew Warner explains, “This bed-frame is meant for households, so it has very little resemblance to a hospital bed. It does, however, possess a level of articulation similar to that of a hospital bed, so our design will serve as a basis for the final product meant to integrate with a hospital bed.”

Pre-shutdown, Van Korlaar and his colleagues at Abram’s Nation were very pleased with the design team’s progress. They were at the stage of testing their initial prototype. While this frame prototype worked as intended, it became clear there were issues with the enclosure's ability to adapt to the different positions that placed excess forces on the frame. While these weak points had been anticipated and were planned to be addressed in the revised model, there was enough concern to warrant a complete redesign.

This led the team to pivot to an alternative design using a fixed frame surrounding an independently articulating platform.  Van Korlaar said, “This pivot is a better solution in the long run as it addresses all of the enclosure issues we encountered and allows the articulating platform to hold all the occupant's weight instead of some of it transferring to the frame itself.” 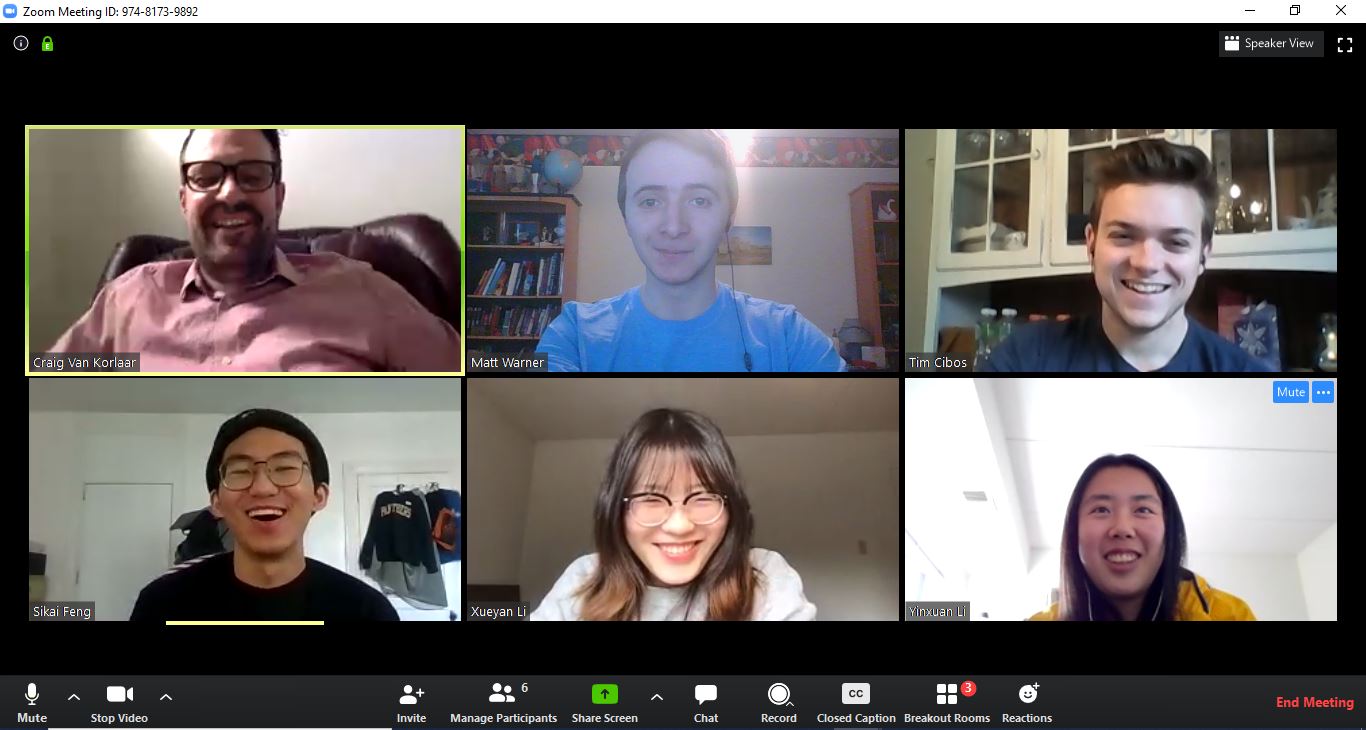 The team and Craig Von Korlaar discussing their project over Zoom.

Then, over spring break, the team faced its second major challenge when the announcement came from the University that facilities were shutting down and students were advised not to return to campus. Warner said his team’s in-person meetings transitioned to online Zoom meetings, which was sufficient for some aspects of the project, but became an issue when brainstorming ideas for the new design. Warner made a rough 3D model of the intended design using Paint 3D. Through screen sharing, the team then used the annotation tools on Zoom to draw on the model to better convey ideas.

Prior to spring break, the design team was using the Swanson Center for Product Innovation (SCPI) to fabricate custom parts for their design and had access to Abram’s Nation production facility. Since Abram’s Nation manufactures their current products internally, they would cut the sections of aluminum tubing the team needed in-house using schematics the team provided the company with. 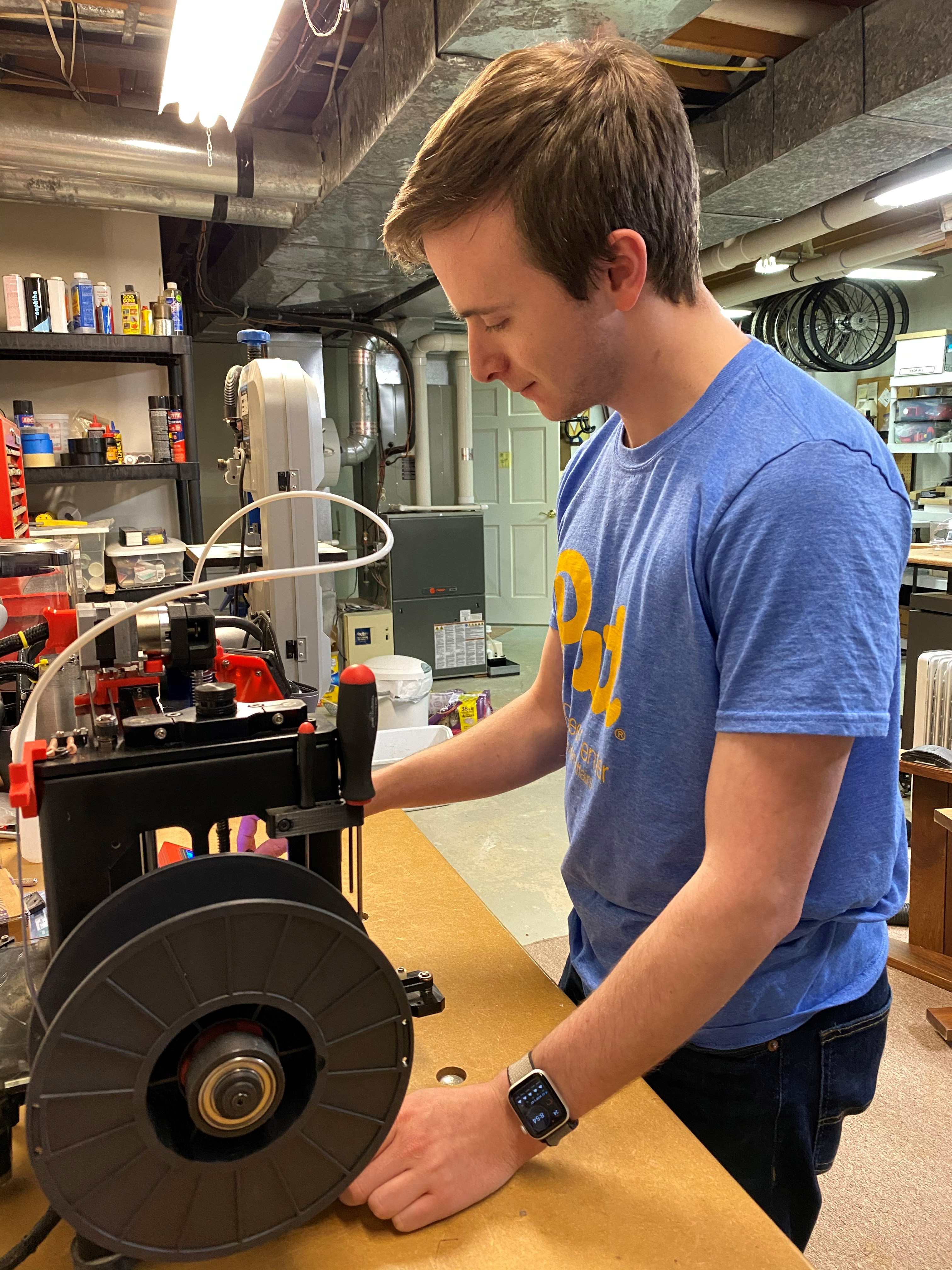 Luckily, Warner’s father has a machine shop at home with a 3D printer. So, Warner began producing custom parts for the new design at home and shipping them to Abram’s Nation, who are currently operating with a skeleton crew. The team at Abram’s Nation is, “...able to cut the sections of tubing that we require, as well as assemble and test the new physical prototype themselves with instructions from our group” says Warner.

As a side note, Abram’s Nation has textile equipment and material that they use to make the fabric and mesh enclosures on their current product, so with some retooling they have been producing face masks for the University of Pittsburgh Medical Center (UPMC) during the pandemic.

The design team is disappointed there will not be a Senior Design Expo this year to present their work.  However, learning to overcome the various challenges they faced proved to be a valuable experience. Warner says, “One of the biggest learning points from this experience for me was that it really showed just how valuable in-person communication can be while brainstorming ideas. While it is very much possible to convey these ideas through an online, digital medium, nothing beats a pen and paper or a marker and a whiteboard.”

Warner and Van Korlaar remained in daily contact with one another throughout the project, with updates on design and fabrication processes and discussing key decisions for the project. Despite some initial skepticism about the ability to complete the project, the team remained dedicated to their goals. The team is grateful to Abram’s Nation for remaining a professional partner despite the ongoing changes within their company, and for maintaining contact and providing helpful input and feedback when needed.

Likewise, Van Korlaar speaks very highly of Warner and the rest of the team, noting the initiative and work ethic of the group despite the challenges they have faced. He says, “I was blown away with the final delivery package, which was of higher quality and thoroughness than what I've seen from some established engineering firms.” Van Korlaar is already looking forward to partnering with another group of Pitt students this fall to tackle their next project.