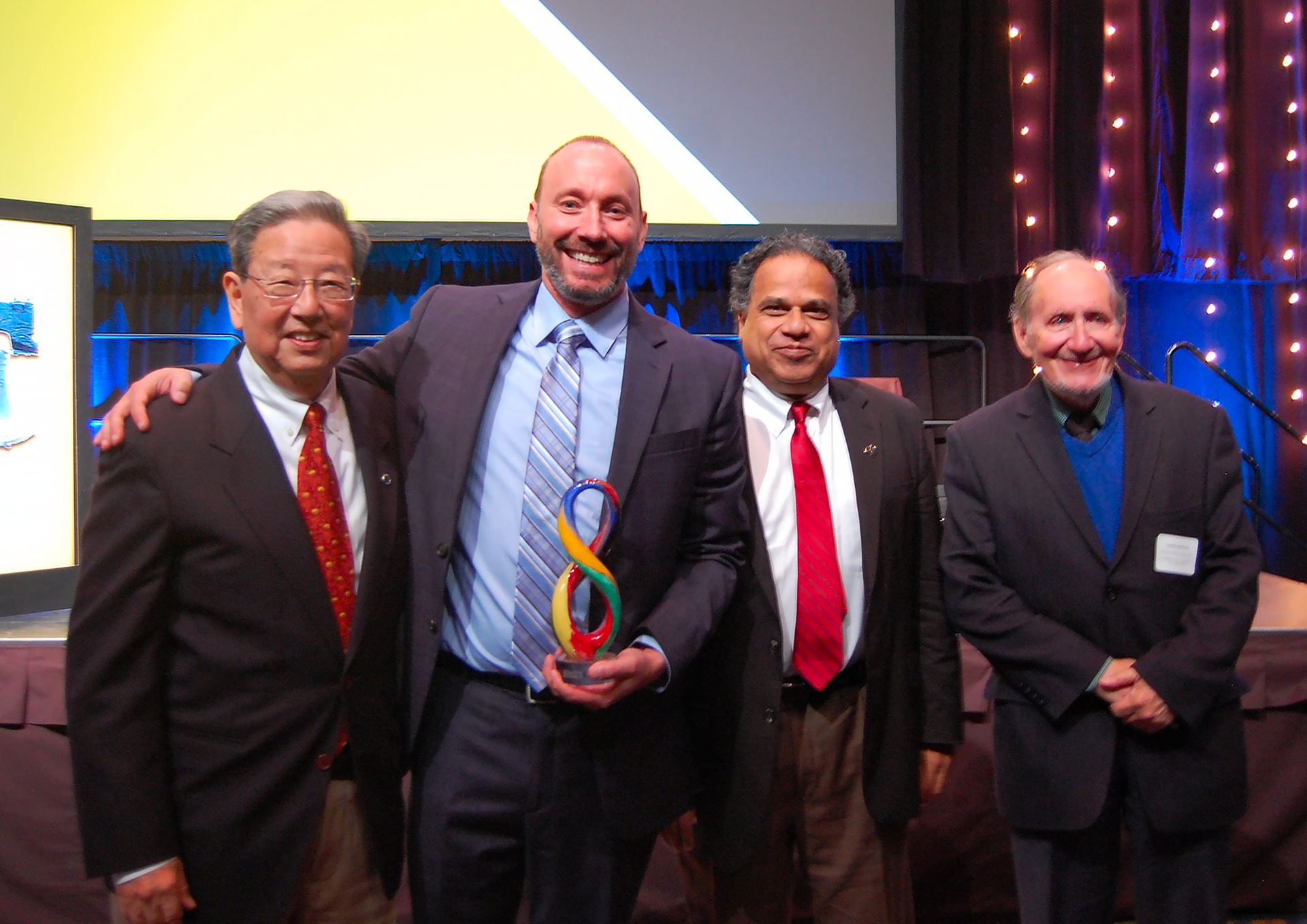 PITTSBURGH (October 31, 2019) … Steven Abramowitch, associate professor of bioengineering at the University of Pittsburgh, received the Biomedical Engineering Society (BMES) 2019 Diversity Lecture Award, which recognizes outstanding contributions to improving gender and racial diversity in biomedical engineering. His lecture, presented during the annual meeting on October 17 at the BMES annual conference, asked the audience to consider, “Are you comfortable?”

For Abramowitch, his comfort was with the path that altered his research and career, as well as his advocacy for diversity programs in engineering. Abramowitch attended graduate school at Pitt and performed ligament research in the Musculoskeletal Research Center under the direction of Savio L-Y. Woo, Distinguished Professor of Bioengineering. A natural continuation would have been a career in sports medicine, but as he learned more about women’s health and the complications associated pelvic floor disorders, he was drawn to research in that area.

“Pelvic floor disorders - such as pelvic organ prolapse - result from a weakening of the muscles and tissues that help support the pelvic organs and cause them to push against the vagina, creating a ‘bulge’ that can extend outside of the body,” said Abramowitch. “These disorders can make everyday tasks more difficult and significantly affect a woman’s quality of life.”

Though Abramowitch was encouraged by some of his peers to pursue a “cooler” career in sports medicine, where there was ample funding, he decided not to take the easy route. With support from the then-department chair and Distinguished Professor of Bioengineering, Harvey Borovetz, he got out of his comfort zone and began working with Pamela Moalli, professor of obstetrics, gynecology, and reproductive sciences at Pitt and pelvic reconstructive surgeon at UPMC Magee-Womens Hospital. Together they now co-direct the Center for Interdisciplinary Research in Female Pelvic Health.

“Nearly one-quarter of women suffer from pelvic floor disorders, with most stemming from injuries during childbirth, and yet we don’t hear about these injuries that women sustain everyday,” continued Abramowitch. “These are not just quality of life issues - they are a quality of family issue.”

In addition to his career in women’s health, Abramowitch has contributed to the Swanson School of Engineering’s diversity initiatives with programs such as PITT STRIVE, the Global Engineering Preparedness Scholarship (GEPS), Engineering Design for Social Change: South Africa, and CampBioE. Through these programs, he has helped to create a culture of diversity and inclusion and has worked to better prepare engineering students for a global marketplace.

“Once again, some of my peers tried to dissuade me from participating in these programs, suggesting that it would be good for the school, but not for my career or even that I should not get caught up in race relations in Pittsburgh,” said Abramowitch. “But with continued support from Dr. Borovetz, my current department chair Sanjeev Shroff, and our Associate Dean for Diversity Affairs Sylvanus Wosu, I was able to take on these roles and help students get out of their own comfort zone.”

Since 2008, Abramowitch has served as director of CampBioE, an immersive summer camp for middle and high school students that implemented a campaign in 2014 to focus on being an affordable resource for underrepresented minorities (URM) and students from underserved school districts. The program trains undergraduate students as senior counselors that provide “near-peer” mentorship for the campers and has, in turn, created a diverse community that makes STEM education more fun and less intimidating.

Ashanti Anderson, a 2019 high school participant, said, “CampBioE has given me the experience of working with students of different ethnicities and cultures and allowed me to learn how to connect with them.”

A sense of community is an important aspect of Abramowitch’s diversity efforts in the Swanson School. In 2015, he established an annual PITT STRIVE retreat that brings together faculty mentors and PhD mentees to improve professional and personal bonds, encourage effective communication, and help identify challenges that both parties face.

“We are trying to create community between faculty and students,” he said. “We encourage them to discuss the difficult things and try to make them uncomfortable so that they can have these important conversations and break these boundaries. We want the faculty and students to be committed to each other’s success.”

Abramowitch’s confidence in not taking the well-paved and comfortable path has helped shape his career and make a significant impact in the Swanson School.

“Being uncomfortable, I realized, is not such a bad thing,” said Abramowitch. “Connecting with individuals who have a different background or worldview can help broaden your perspective and, for me, has ultimately provided a more fulfilling career.”

Since starting PITT STRIVE, the Swanson School has surpassed historic levels of URM enrollment in the PhD program; through the study abroad programs, Abramowitch has helped undergraduate students see the impact of engineering through the lens of another culture; and with CampBioE, he has educated more than 1000 middle and high school students, with more than 40 percent participation from URMs and low-income students since the diversity campaign in 2014. Abramowitch’s impact has not only been acknowledged by BMES - he is also the only two-time recipient of the Swanson School’s Diversity Award, in 2011 and 2014.

“What sets Dr. Abramowitch apart is that his work in this area is not defined by a singular activity or initiative,” said Dr. Borovetz. “Instead, Dr. Abramowitch’s commitment to diversity and inclusion is integrated into who he is as a person.”