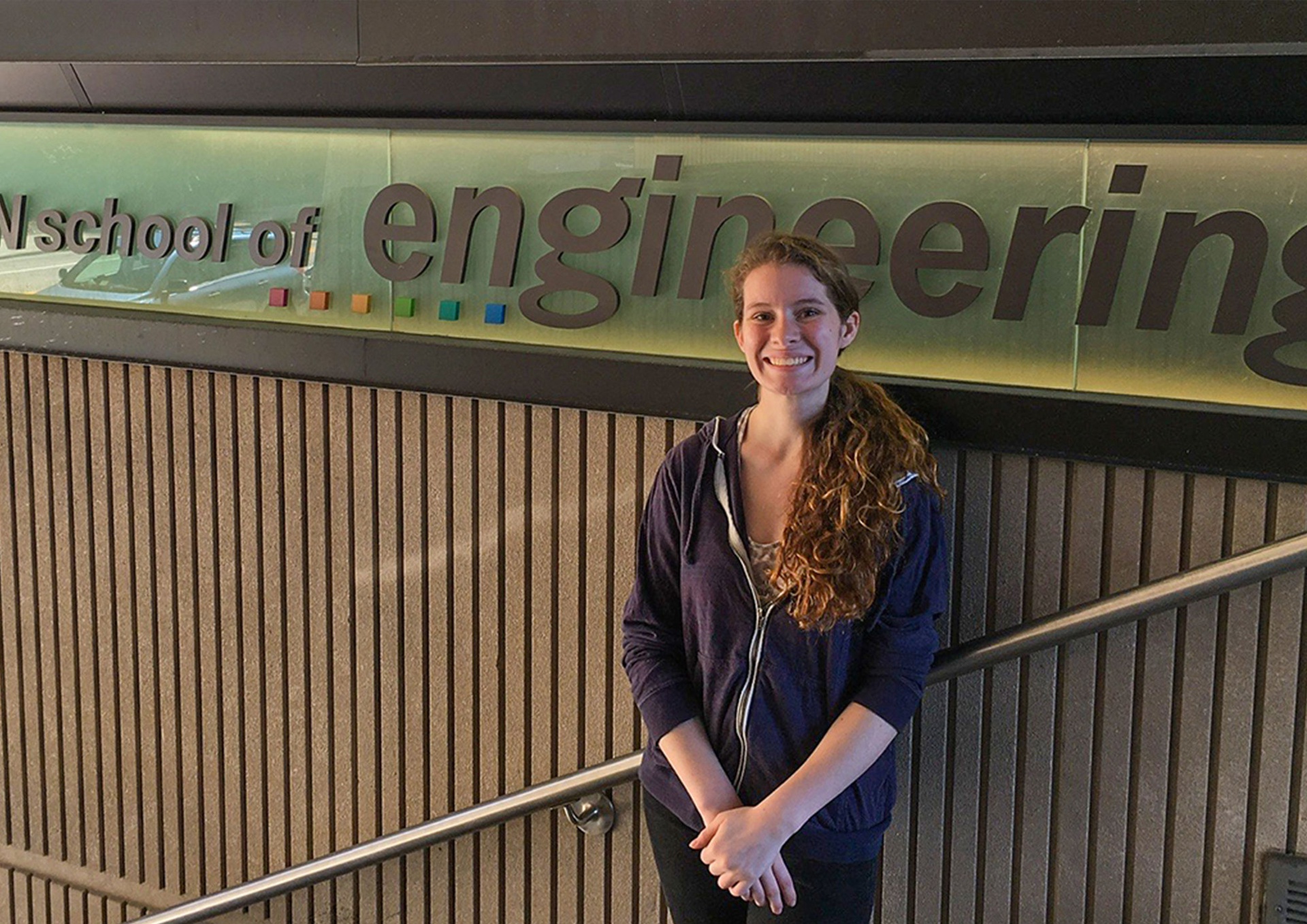 Ever wondered how to move a mechanical arm using only your mind? Third-year student Audrey Case can explain. (Courtesy of Audrey Case)

Reposted from Pittwire. Click here to see the original story.

When Audrey Case was 19 years old, she suffered her third concussion while playing intramural soccer. She was carried off the field and rushed to the hospital.

“I just kept quietly repeating, ‘Not again, I can’t do this again,’” said Case, now a third-year, bioengineering student at the University of Pittsburgh’s Swanson School of Engineering. “But that one little injury changed the course of my college career.”

Case recalled the incident, as well as her prior two concussions in her first published book, “Plugged In: The Past, Present, and Future of Brain Computer Interfaces,” which breaks down research in a lay-friendly way. The book was released on Amazon Kindle in late July.

Although she recovered from each concussion, the most recent injury changed Case's course of study by interesting her in the human brain and the science behind its recovery from injuries. It may not be as iconicas Isaac Newton’s mythical “a-ha” moment with the apple tree, but her recovery did bring her to Pitt’s Rehab Neural Engineering Labs in 2018. There, she learned more about new rehabilitation technologies aimed toward helping people regain lost mobility and function, including brain-computer interface (BCI) research.

“I started to think, ‘What if I hadn’t recovered?’ or ‘What if it was a more permanent injury?’” she said.

Case’s current work uses magnetic resonance imaging, or MRI, to map out brain activity related to movements and sensations of individual fingers in people with spinal cord injury. She said she eventually hopes to work in biotechnology research after completing her studies.

Jennifer Collinger, assistant professor and research operations director of the labs, said she was surprised when Case told her she was writing a book on the topic with only months of experience. However, it was clear to her that Case was “a quick learner” and was genuinely excited and curious about the work.

“She did a great job with being able to communicate this information to a general audience,” Collinger said. “I was impressed to see the number of references provided in each chapter and how she hit on a lot of the major topics in this field right now.”

One topic she covers is testing performed with Nathan Copeland, a man with paralysis who collaborated on Pitt research. In a 2016 first in humans, he demonstrated a technology that allowed him to experience the sensation of touch through a robotic arm that he controlled with his brain. This led to him presenting at a science conference in Japan and meeting President Barack Obama.

“He started spinning the robotic arm with its extra joints, and the principal investigators had to tell him to stop,” Case said. “He said, ‘But it’s like I have two wrists and it’s so cool.’ I met him during a break in testing, but he was funny, bright and interesting.”

For her book, Case drew on previous experiences speaking with friends and family about brain-computer interface technology, as well as reading what was available about it. She said she hopes the general public will have a better understanding of BCI research and the progress being made for people with limited mobility.

“It was really difficult to speak with people, because they weren’t understanding what I was saying,” she said. “The language I was reading about this research was so vague and there was so much technical jargon. I also read about how people were so afraid of driverless cars, because they didn’t know how they worked. I was worried something similar would happen with BCI technology.”

Fang Liu, a research engineer in the labs, and Case’s primary mentor, agreed.

“It’s great to give people some knowledge about this,” Liu said. “We work with spinal cord injury patients and stroke patients, and it’s hard for them to adjust to everyday life. We try to make people realize what we can do in the labs to help them.”