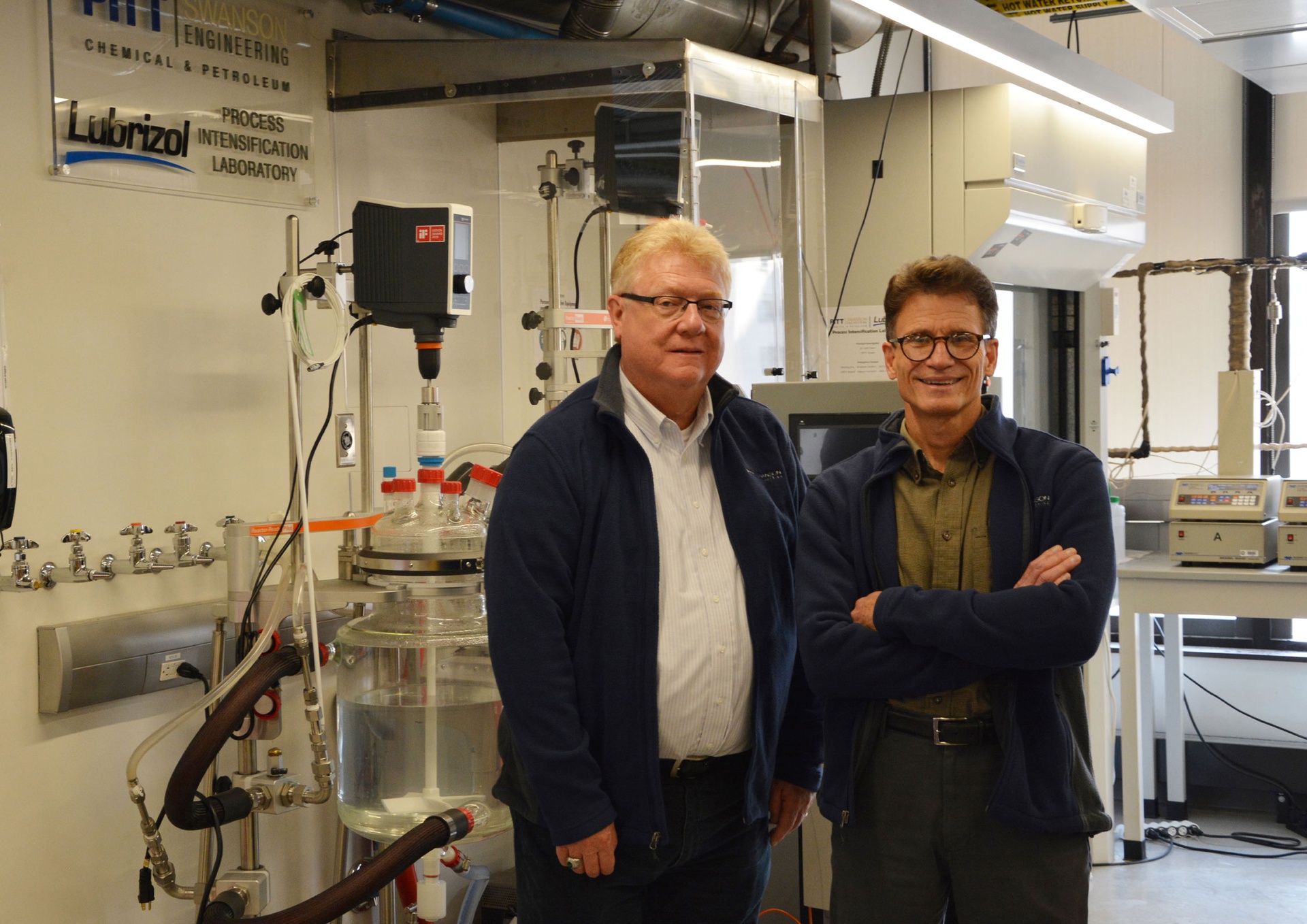 For the past two years, faculty from the Swanson School’s Department of Chemical and Petroleum Engineering have been involved with the return of the AIChE Annual meeting to Pittsburgh. Although the conference was last in Pittsburgh only six years ago, Pittsburgh and the western Pennsylvania region have since experienced a sea change in energy research and industry. The vast Marcellus and Utica shale deposits, which were finally made accessible through hydrofracturing technology, have created the potential for another energy and manufacturing boom in a region built upon legacies of coal, iron, steel and nuclear power.

The impact of this evolution was not lost on the AIChE Meeting Program Co-Chairs – Dr. Karl Johnson, the William Kepler Whiteford Professor of Chemical and Petroleum Engineering at Pitt; and Cliff Kowall, Senior Technical Fellow in the Process Development Department and the Corporate Engineer at The Lubrizol Corporation in Wickliffe, Ohio. Since the formation of a strategic research partnership between the Department and Lubrizol in 2014, Johnson and Kowall have developed a greater philosophical understanding of academic-industrial partnerships. In particular how they not only benefit the organizations as a whole but also the regional economy and region’s workforce development.

Kowall’s more than four decades in industry informed his AIChE conference session, “What the Heck Happened? Past, Present & Future Disruptions to the Chemical/Fuels Business”. Similarly, “The Future of Energy in the Region, Nation, and World” session co-chaired by Dr. Johnson is inspired by the Pittsburgh region’s history and new future in energy research and development.

“From the very beginning, AIChE challenged us to develop sessions with a regional appeal and with a voice to the changes in the chemical engineering workplace,” Kowall said. “Although I’m looking at it from an industry perspective and Karl from an academic perspective, Pittsburgh presents a distinctive picture of how disruption – both bad and good – creates socioeconomic change and how a region learns to not only adapt from it but to better prepare for future occurrences.”

The co-chairs have a long history in the region: Dr. Johnson has been a professor at Pitt since 1995, joining the university not long after the collapse of Pittsburgh’s steel industry, and Kowall has been in the chemical industry for more than four decades. The two agree that industrial disruptions have shaped how academia, industry, and the workforce react to seismic shifts in the economy. Today the role of energy diversification is leading that change.

“Having AIChE back in Pittsburgh is a great way to highlight the evolution of the energy industry and the Pittsburgh economy,” Dr. Johnson says. “We’re at a very exciting time not only as chemical engineers but also as a country where the energy landscape has been upended just in the last decade. The national labs are still vital for exploring how we can revolutionize the industry – indeed, Pitt and many of the universities in the tri-state region are close partners with the National Energy Technology Laboratory here.

“The alliances built between researchers like myself and companies like Lubrizol are identifying new opportunities to exploit those energy technologies and potentially spin them off into new areas of applied research that we couldn’t do individually.”

Pittsburgh has long been the poster child for the impact of industrial revolution and disruption. The city and the surrounding ten-county region once boasted one of the largest manufacturing industries in the world. However, an inability to predict disruption – more advanced and economical steel manufacturing developed overseas, as well as an over-reliance on one industry – cratered the regional economy in the 1980s. This also led to massive depopulation as workers left for opportunity elsewhere, while those just entering the workforce also had to relocate after graduating to find employment.

But since then, the region’s public-private partnerships have helped to build a more robust and diverse economy supported by industries from higher education and healthcare to energy, advanced manufacturing and finance. Kowall explains that Pittsburgh learned from that previous disruptions how manage recovery and has now better prepared itself for the next disruption created by the tremendous growth of the shale energy and manufacturing industry.

“In my session, my colleagues and I will talk about how these changes shaped our careers and really made us take a second, third, and even fourth look at how we need to adapt,” Kowall, who also teaches at the Swanson School, says. “There is always a lot of angst, but also a lot of opportunity if you pay attention, do your homework and try to anticipate what the next disruption might be and how you can take advantage of it. I think we, as chemical engineers, have greater flexibility than most to make this adjustment.”

Dr. Johnson adds that these disruptions have also shaped the nature of higher education in the classroom, the lab and the field.

“The history of our department truly shows the impact of energy on our curriculum and our research,” Dr. Johnson says. “Ours was the first petroleum engineering program in the world in 1910. Later, we branched into polymers, materials and molecular science to the point where petroleum was almost a footnote. But today, my colleagues and I have a stronger and broader focus on energy, from carbon sequestration and catalysis to improved hydrofracturing and storage technologies.”

“The growth of the shale industry in this region just in the last couple years is indicative of that. Currently the downstream opportunities are located along the Gulf, where that industry was born, so we’re shipping the resources we harvest here for use in manufacturing elsewhere,” Dr. Johnson notes. “But Shell is now building just north of the city what will be the largest ethane cracker in the U.S., if not the world. This means that we as chemical engineers will have the opportunity to exploit those resources locally, giving our students greater opportunity for careers in industry or as entrepreneurs.”

Dr. Johnson and Kowall say that the experiences and opportunities discussed at both of their AIChE sessions are relevant for tomorrow’s chemical engineering student but even more so for today’s seasoned professional.

“I have always had a deep belief in continuing education,” Kowall says. “Really, none of these disruptions should be surprises, so it’s important for us to teach the next generation how to identify the impact and how to prepare. These disruption events are the ultimate opportunity for growth.”

“This is an exciting time to be a chemical engineer,” Dr. Johnson adds, “and I hope our colleagues from around the world can learn in Pittsburgh not only what the future brings, but how we can help our students and Institute members to learn to benefit from it.”