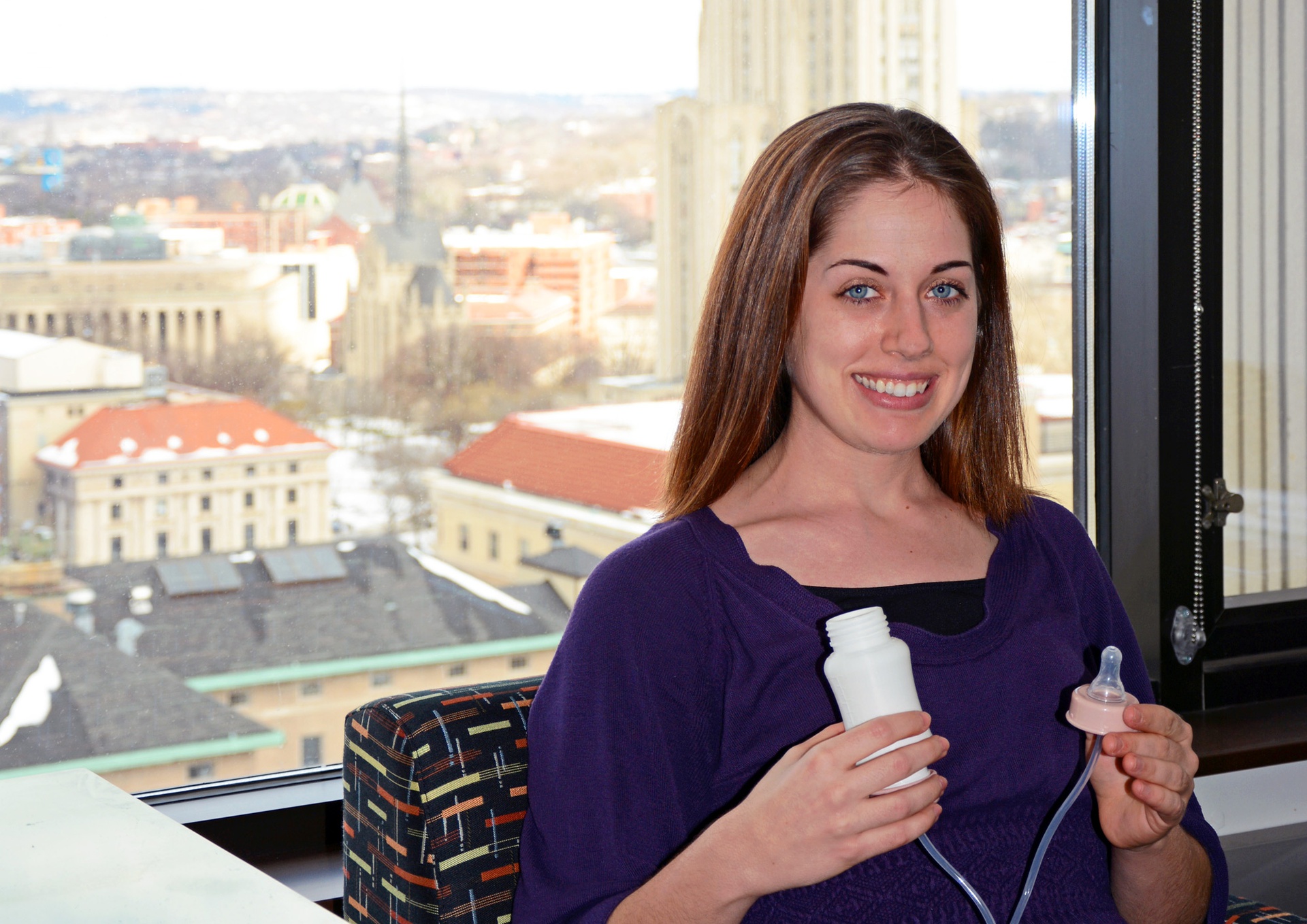 Hornbostel with a prototype of the Pump2Baby breast pump accessory

Read coverage by Anya Sostek at the Post-Gazette here.

PITTSBURGH (May 15, 2018) … Breast milk has many known health benefits, but breastfeeding is not always an option for moms, and many turn to pumping as an alternative. Katherine Hornbostel, assistant professor of mechanical engineering and materials science at the University of Pittsburgh Swanson School of Engineering, wanted to make this often cumbersome process easier. She decided to tackle the antiquated design of modern breast pumps and create a clever attachment that would make pumping more like nursing.

Hornbostel found herself in this parenting world after giving birth to twins during her doctoral studies at the Massachusetts Institute of Technology and decided to participate in their Breast Pump Hackathon six months into motherhood.

“‘Mom-tech’ is really behind the curve, and there is a lot of room for innovation,” said Hornbostel. “The hackathon put me into the mindset of creating new products for mothers, and two years later, I found myself filing my first ‘mom-tech’ patent for Pump2Baby.”

“Whether it is difficulty latching, giving birth to multiples, returning to work, or a host of other common issues, many women struggle with nursing and start pumping to produce breast milk,” explained Hornbostel. “I wanted to create something to ease frustration with the pumping process.”

Pump2Baby is a breast pump accessory that connects to any Medela breast pump. The user begins hands-free pumping with a pumping bra, and once some milk has accumulated in the bottle, the baby can suck it out through tubing to a nipple.  A special valve in the bottom of each bottle prevents milk from leaking until the baby starts sucking.

Between pumping, cleaning, and feeding, the current process can take an hour for each feeding session. With around 8 feedings a day for newborns, pumping quickly becomes a full-time job for moms. Hornbostel’s Pump2Baby design saves time and stress by allowing moms to pump and bottle-feed simultaneously.

“Many women, myself included, get burned out on pumping milk around the clock. I think the hardest part for me was that I could not take care of my twin infants when I was constantly attached to that pump,” said Hornbostel. “If I had Pump2Baby back when my boys were newborns, I almost certainly would have stuck with pumping longer because I could have actually fed them while pumping milk.”

In addition to its time saving features, Pump2Baby also returns another benefit of breastfeeding- the mother’s bonding experience with her child. The ability to pump and feed at the same time means the user can now hold their baby while pumping which simulates the bond moms create while breastfeeding.

“There are human factors to the production of milk,” explains Hornbostel. “Some women struggle to produce milk because the process of pumping is too mechanical. Holding your child and connecting with them often helps encourage production.”

Hornbostel believes that this product is going to change the way we approach “mom-tech” and hopes it will spur future innovations. She calculates that this product could save the user a total of 180 hours over six months if they exclusively pump. These precious hours mean more time spent with your little one or better yet...more sleep.