Capping Off Another Successful Year

Within the first week of returning to campus each semester, about three dozen civil engineering seniors gather to brainstorm project ideas and construct teams for the Senior Design Course. They will spend the next 15 weeks transforming their ideas into implementable projects complete with detailed plans for all the anticipated, and many of the unforeseeable, challenges that come with creating the next successful improvement to society’s infrastructure.

“Before moving on to the next stage of their development, students must demonstrate through the course that they have learned a great deal in their classes and an ability to apply what they learned to challenges they might not have seen before,” says Radisav Vidic, chair of the Swanson School’s Department of Civil and Environmental Engineering. “For this reason, the Senior Design Course is the epitome of our undergraduate education.”

Designing the Right Idea
“Every project is interesting, or we wouldn’t do it,” says John Oyler, associate professor of civil and environmental engineering.

Dr. Oyler has been involved with Pitt’s Senior Design Course as coordinator for the past 27 years. All senior engineering students must complete the course during their final semesters, so Dr. Oyler has helped hundreds of Pitt engineers take their final steps toward graduation. However, not every idea starts out as a hole-in-one.

“Last semester we had a team who wanted to redesign the golf course in Schenley Park. I told them, ‘You have to explain to me why this is worth doing.’ They came up with a strong proposal to support their ideas and managed to prove to us that this is really a full-blown civil engineering project that would really benefit people who used the course,” says Dr. Oyler.

Another idea grew out of the department’s increasingly popular construction management program. The team specifically wanted to undertake a large project with wide scope. They found a match based on a suggestion by John Sebastian, professor of civil and environmental engineering. The idea was to devise a feasible plan for converting a former industrial site along Pittsburgh’s North Shore into a booming business and recreational district.

“Thanks to Professor Sebastian, we were able to get information on a project in the works that is much too big for anybody—or at least any one group,” Dr. Oyler says. “When these students gave their presentation, it became clear somebody has to be the brains behind a project, regardless how big it is, and they were the right ones for the job.”

During the spring semester of 2018, student teams came up with plans to improve and update a multipurpose campus building, design a microbrewery on the Monongahela River, and map out a revitalization strategy for a state park. One of the teams decided to focus on a major highway interchange and found the right combination of specialties was the best way to keep things running smoothly.

Intersecting Disciplines
“The ideal team is multidisciplinary. When we build a team, we try to represent as many different specialties as we can,” explains Dr. Oyler.

Last semester, TBD Engineering formed to approach one of Pittsburgh most ubiquitous and infuriating infrastructure problems: traffic jams. The students targeted the Interstate 79 and State Route 51 interchange near Neville Island, northwest of Pittsburgh.

“We were trying to decide on a project, and when someone suggested redesigning the interchange, one of our team members, Nick Bruni, jumped at the opportunity to fix it,” says Amedeo Hirata, team leader of TBD Engineering. “He lives near the intersection and has to drive through it every day.” 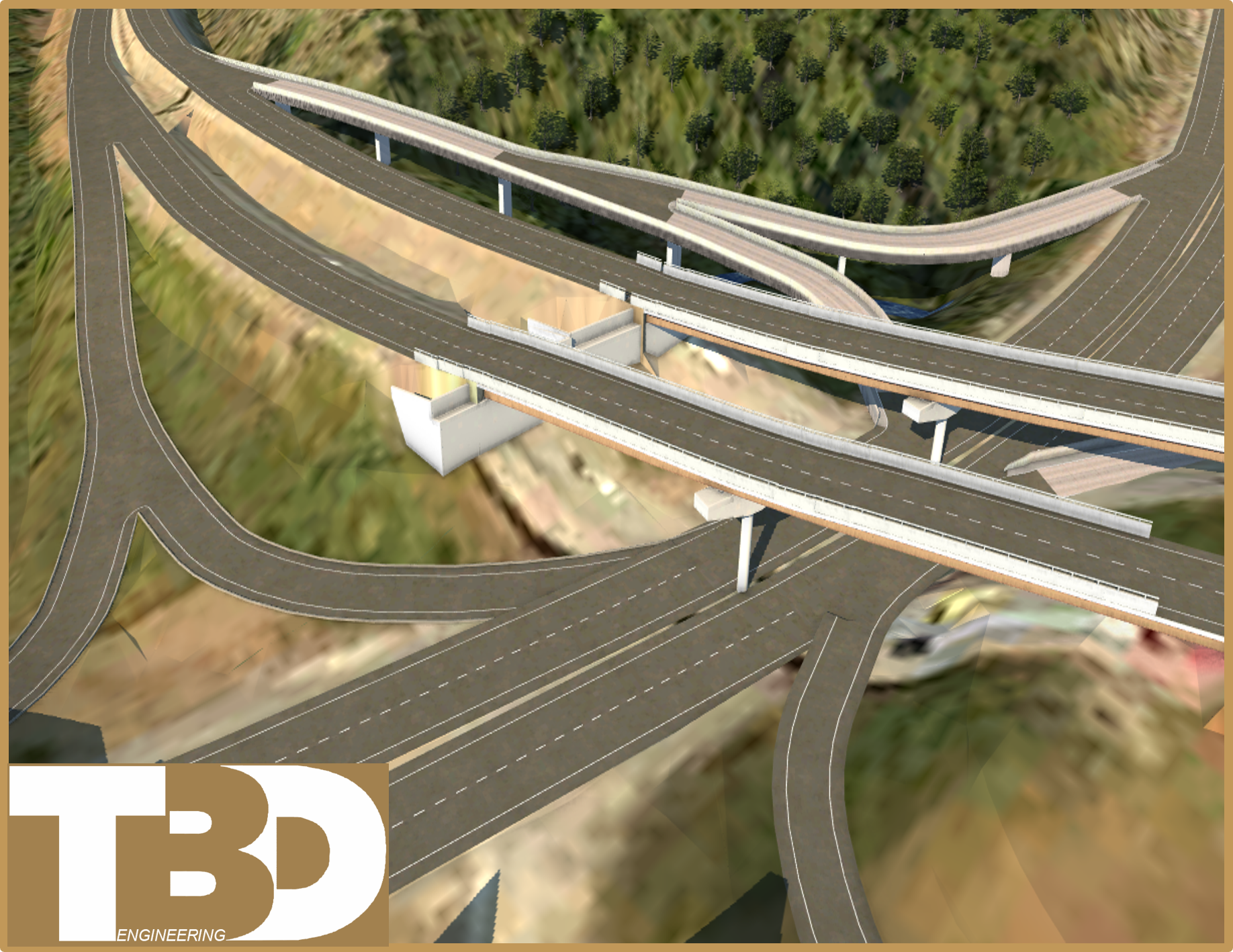 A digital render of TBD Engineering's proposed design solution for the Interstate 79 and State Route 51 interchange. The students used infrastructure design software called AutoDesk InfraWorks to help complete the project.
The two heavily-trafficked highways lack several features needed to qualify their meeting as a full interchange. When driving southbound on I-79, there is no direct route to transfer onto PA-51. As a result, commuters are forced to take an eight to 15-minute detour through Neville Island which increases overall travel and congestion. By studying crash reports, they also found the northbound on ramp to I-79 from PA-51 had inadequate merging and sight distances. As a result, it is responsible for a high number of incidents.

“Right now the intersection is kind of a free-for-all, and traffic backups can stretch for up to a mile and a half during rush hour. We did lots of research and decided to propose a new design configuration called a ‘single point urban interchange.’ The proposal included a traffic light to reduce the number of potential crash zones without slowing things down,” says Hirata.

Hirata handled the structural design component while working with teammates specializing in geometric, transportation, and geotechnical design as well as construction management. He says the team quickly reached a consensus that their composition was the right fit for completing the project.

“As a team leader, I was really motivated to choose teammates who were recognized as the best students in my graduating class. This was my favorite undergraduate course because of the amount of freedom we were allowed right off the bat and the experience of collaborating in an environment with so many talented people,” Hirata says.

Looking Forward to the Future
“The Senior Design projects are not replicas of the design problems students have already seen in their other courses,” says Dr. Oyler. “The students are completing projects in the same way a project is completed outside of the classroom. By the end of the semester, they must have shown their capability to bring a project completely from start to finish.”

Each semester brings a new cohort of students and project ideas waiting for cultivation. In fall 2018, one idea gaining traction is working with Allegheny County representatives to clean mine drainage pollution in Plum Borough’s Boyce Park. Another project has students looking to reduce flooding in Bridgeville in the wake of the June 20th storm, which damaged many structures and caused one fatality.

Regardless of the individual challenges, all senior design teams will have to find a way to combine their knowledge a variety of civil engineering specialties into a plans for improving surrounding communities and the lives of the people that live there.

“As civil engineers, we have an obligation to design, build, and maintain society’s infrastructure. The closest we can get these projects to that objective is always the goal,” says Dr. Oyler.

Capping Off Another Successful Year