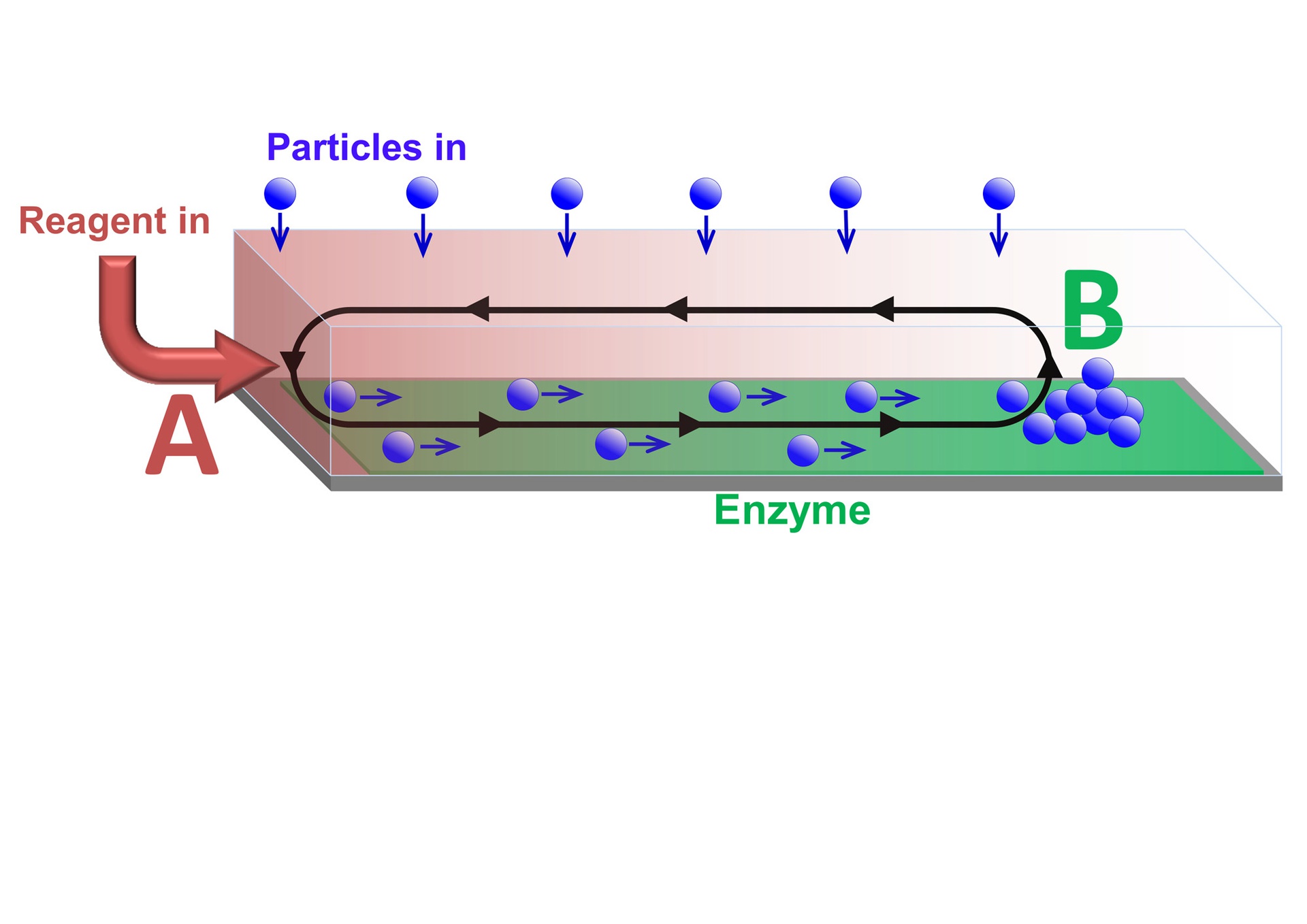 PITTSBURGH (February 17, 2017) … Capitalizing on previous studies in self-powered chemo-mechanical movement, researchers at the University of Pittsburgh’s Swanson School of Engineering and Penn State University’s Department of Chemistry have developed a novel method of transporting particles that utilizes chemical reactions to drive fluid flow within microfluidic devices. Their research, “Harnessing catalytic pumps for directional delivery of microparticles in microchambers,” was published today in the journal Nature Communications (DOI: 10.1038/ncomms14384).

“One of the critical challenges in transporting microparticles within devices is delivering the particle to a specific location,” Dr. Balazs explained. “Much like a conveyor belt in a factory, you want to move the particle within a closed system without any modification to its surface or damage to its structure.”

Dr. Balazs noted that in addition to successfully delivering the particles, the other challenges the researchers faced were maintaining unidirectional flow from point A to point B within a closed chamber, and ensuring that a critical concentration of these particles could be delivered to sensors, which only operate above a critical threshold. The solution was to generate a gradient of a chemical reagent by introducing the reagent at one end of the chamber, point A. Enzymes on the surface of the chamber consumed the reagent so that it was completely depleted at the point B. Since the presence of the reagent increases the fluid density, a density gradient was established between points A and B, leading to convective flow that transported particles like a conveyor belt.

“Previously, to generate spontaneous propulsion of microparticles, one needed to chemically modify the surface of these particles, thus altering their inherent properties,” Dr. Balazs said. “Moreover, modifying the particle’s surface does not necessarily allow you to direct its motion within the chamber. We were able to predicate through our computational models and demonstrate in the experiments performed at Penn State that the flow generated by the catalytic chemical reaction in the chamber could effectively transport particles to a particular sensor, and could permit control over the speed and direction of the particle transport, without having to use an external pump or any modification of the cargo.”

“Utilizing catalytic reactions to drive fluids to controllably transport particulates in solution is a relatively new field, even though it’s what our bodies do at any given moment when converting food to fuel. Replicating it within a synthetic system however is very difficult,” Dr. Sen added. “In our lab, we were able to design a “machine” without the need for a mechanical device that could be used many times over simply by adding fuel to the chamber, while allowing the particle to remain a passive participant along for the ride.”

Image above: Particles transported along a channel by chemically-driven fluid flow. The flow is generated by reagent entering at one end of the channel (A) and reacting at the enzyme covered surface. The cargo is deposited at position B, which can be controlled by varying the reaction rate. (Oleg E. Shklyaev and Henry Shum)