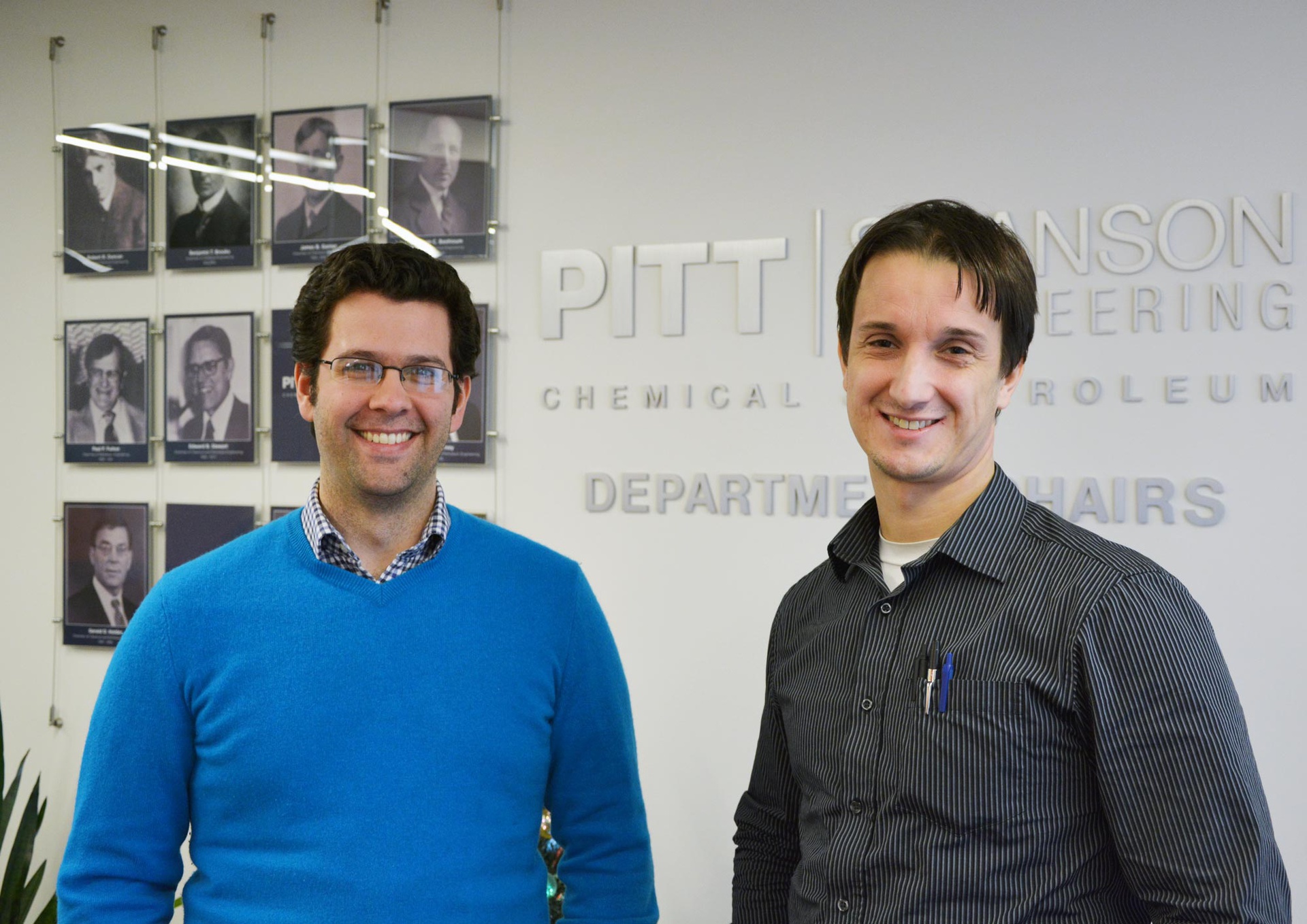 PITTSBURGH (December 4, 2017) … Two junior faculty members in the University of Pittsburgh’s Swanson School of Engineering were among a class of early-career researchers recognized for their nascent research in energy storage. James McKone and Christopher E. Wilmer, both Assistant Professors of Chemical and Petroleum Engineering, along with their peers were honored as new Fellows at the first Scialog: Advanced Energy Storage meeting in Tucson, Arizona, Nov. 2-5, hosted by the Research Corporation for Science Advancement.

Each Scialog brings together researchers from across traditional disciplinary boundaries – AES in this instance attracted chemists, engineers, materials scientists and physicists. Unlike most conferences, almost all the meeting time is devoted to carefully crafted breakout science discussions to explore novel ideas and develop a vibrant network of Scialog Fellows to advance basic research, which in turn can be applied to solve major societal problems.

“I am tremendously proud of James and Chris, who are among Pitt’s outstanding young researchers in energy,” noted Steven R. Little, the William Kepler Whiteford Professor and Department Chair of Chemical and Petroleum Engineering. “Their exploration of next-generation energy storage systems not only broadens the University’s portfolio, but also further establishes Pittsburgh as a nexus for energy R&D and innovation.”

The conference yielded 35 competitive proposals, the most for any Scialog, created by teams of Fellows newly formed at the meeting. One of the goals of Scialog is to rapidly catalyze new collaborations, and members of each team are required not to have previously collaborated. Winning teams will be announced by the end of the year, according to RCSA Senior Program Director Richard Wiener.

“Research Corporation chose to focus on advanced energy storage,” Dr. Wiener said, “because we believe this critical area of science requires major breakthroughs in fundamental understanding of electrochemical and physical processes that will lead to a new era of technological advance.”

About Dr. McKone
Dr. McKone’s research group studies fundamentals and applications of electrochemistry, photochemistry, and solid-state/materials chemistry with an emphasis on renewable energy and sustainability. He earned a bachelor’s degree in chemistry and music from Saint Olaf College in Northfield, MN and PhD in chemistry from the California Institute of Technology (Caltech), where he was advised by Harry Gray and Nathan Lewis. Prior to Pitt, Dr. McKone was a postdoctoral researcher in the Department of Chemistry and Chemical Biology at Cornell University under Héctor D. Abruña and Francis J. DiSalvo.

About Dr. Wilmer
Dr. Wilmer’s research focuses on the use of large-scale molecular simulations to help find promising materials for energy and environmental applications. He is the principal investigator of the Hypothetical Materials Lab at Pitt and leads his team in solving energy and environmental challenges with complex, hypothetical nanostructures called “molecular machines.” He earned his bachelor’s degree in applied science from the University of Toronto’s Engineering Science—Nanoengineering program, and his PhD in Chemical Engineering at Northwestern under the mentorship of Randall Q. Snurr.

While at Northwestern, Dr. Wilmer took an interest in developing new technologies through entrepreneurship and co-founded NuMat Technologies, which designs porous materials that could be used to make better natural gas fuel tanks for vehicles. In 2012, the company won the Department of Energy’s National Clean Energy Business Plan Competition, while Dr. Wilmer was named to Forbes’ 30 Under 30 in Energy. He has authored more than 20 publications and holds more than 500 article citations, and is co-founder of Ledger, the first peer-reviewed academic journal dedicated to blockchain technology and cryptocurrency. For more information visit Dr. Wilmer’s website at www.wilmerlab.com.