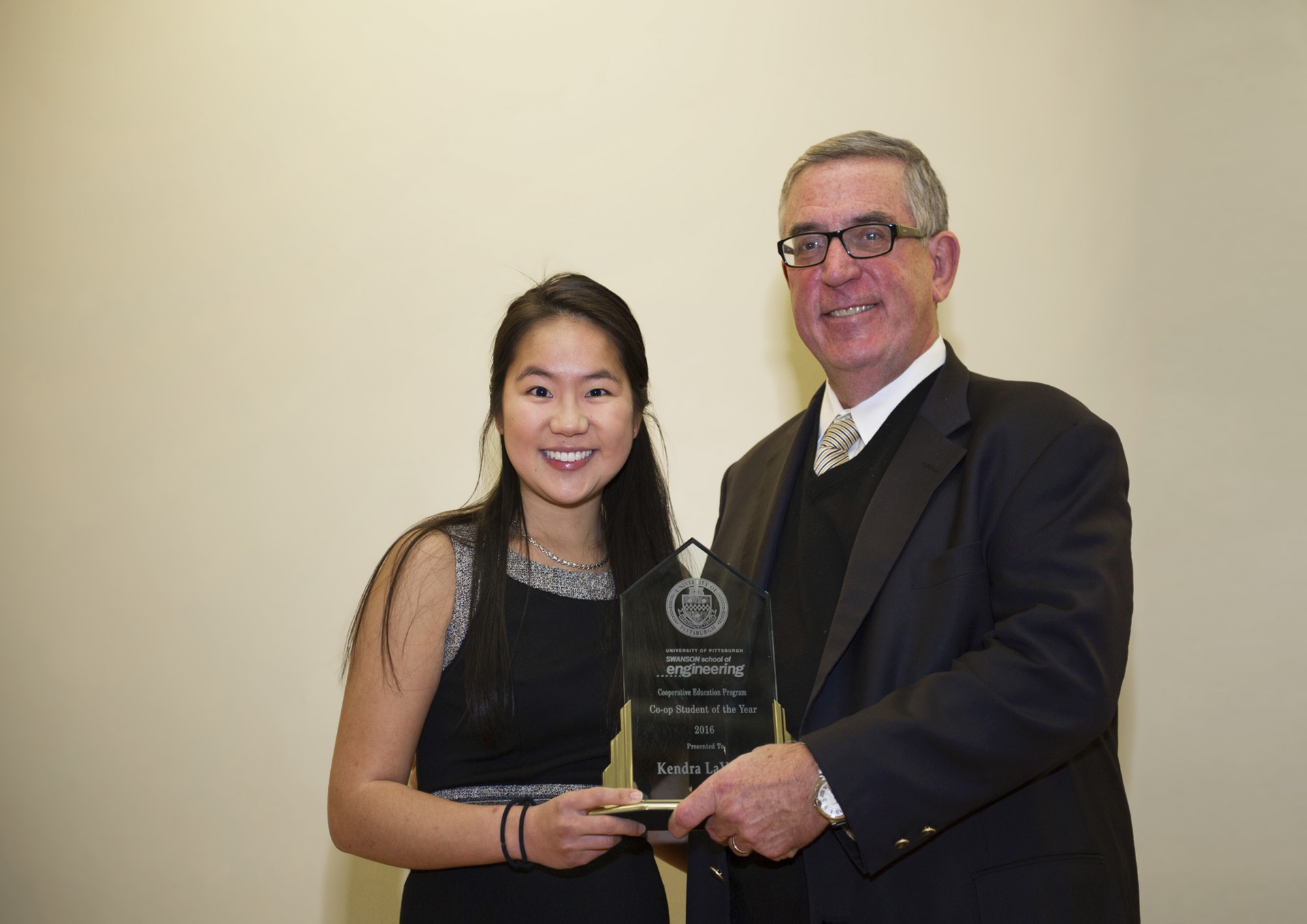 PITTSBURGH (December 20, 2016) … The American Society for Engineering Education’s (ASEE) Cooperative & Experiential Education Division (CEED) has named Kendra LaVallee, a University of Pittsburgh student studying chemical engineering, the 2017 National Co-op Student of the Year. LaVallee will attend the annual ASEE conference in Jacksonville, Florida in February to receive her award. LaVallee is the fourth Pitt student to be named ASEE Co-op Student of the Year, tying Georgia Tech for the most student winners.

LaVallee was named the University of Pittsburgh’s Swanson School of Engineering Co-op Student of the Year for 2016 for her accomplishments as a Technical Operations Co-op at Johnson & Johnson Consumer Inc. She received six Johnson & Johnson Encore Awards, including four gold, one silver and one bronze. LaVallee worked on several projects, including the international launch of a major gastrointestinal product with estimated annual sales of $40 million and the continuous improvement process for an alternative analytical procedure for the company’s highest selling product with a yearly projected savings of $375,000.

“Pitt’s rigorous chemical engineering program equipped me with the tools necessary to succeed during co-op,” says LaVallee. “Co-oping at Johnson & Johnson has been the best decision of my undergraduate career. I was able to apply my academic knowledge to industry, then upon my return to Pitt, understand the industrial relevance of my studies.” Lavallee’s experience at Johnson & Johnson has encouraged her to pursue a certificate in supply chain management.

While at Johnson & Johnson, LaVallee also served as the Professional Development Chair of the McNeil Intern and Co-op Association within Johnson & Johnson. She planned presentations and networking events for more than 30 co-op students. Steve Won, staff scientist at Johnson & Johnson and Lavallee’s manager, nominated her for the Co-op Student of the Year award.

LaVallee will graduate in the fall 2017 and will receive her bachelor’s degree in chemical engineering. She is a research assistant in the Pharmaceutical Sciences Lab under the direction of Dr. Vinayak Sant, assistant professor in the Department of Pharmaceutical Sciences. She was previously a research assistant in the Biomaterials Laboratory under the direction of Dr. Prashant Kumta, the Edward R. Weidlein Chair Professor at the Swanson School of Engineering and School of Dental Medicine. In this role, she engineered polymeric materials with load-bearing biodegradable properties that will incorporate growth factors and cell therapy.

LaVallee is in the Honors Chemical Engineering Society, Omega Chi Epsilon and the Service & Fundraising Committee Member of Phi Sigma Rho. She is the Women’s Engineering Conference Publicity Chair for the Society of Women Engineers.

About the American Society for Engineering Education

The Cooperative & Experiential Education Division is an ASEE division for professionals in academia, business, industry and government who are specifically interested in and dedicated to the improvement and promotion of experiential learning through cooperative education and other quality work integrated learning programs.