Technology from bioengineering’s Tamer Ibrahim gives us a better look at the human brain, and collaborations with psychiatry allow researchers to examine how it affects the human mind 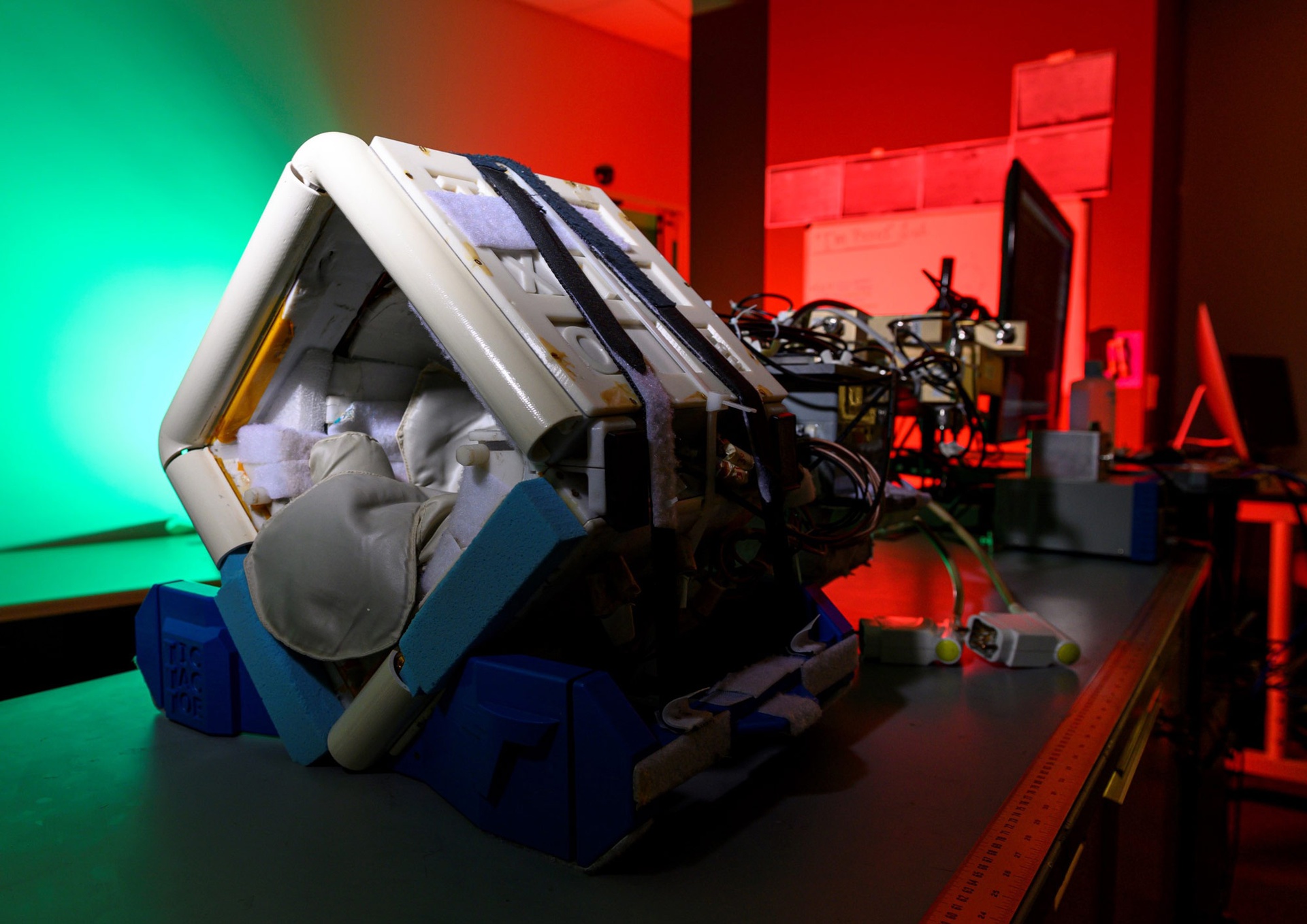 The brain is the most complex organ in the human body. At a mere three pounds, it is a workhorse that controls fundamental aspects of human life, such as movement, sensation, memory, and other involuntary processes in the body. In addition, the brain helps make us who we are: it controls our emotions, personality, language, and behavior. Despite being a crucial organ, a comprehensive understanding of the brain is still elusive.

Technology developed in the Swanson School of Engineering’s Radiofrequency (RF) Research Facility allows researchers at the University of Pittsburgh to harness the power of one of the strongest human magnetic resonance imaging (MRI) systems. These imaging advancements have illuminated details of brain structure and function that are not visible on standard MRI devices, and researchers now want to study what these images can reveal about the human mind.

Getting a Better Look at the Brain

The Radiofrequency (RF) Research Facility at the University of Pittsburgh traces its roots to Professor of Bioengineering Tamer Ibrahim’s doctoral work at the Ohio State University, where he designed antennas and coils to address challenges with ultrahigh field MRI imaging. At Pitt, the RF Research Facility and the 7 Tesla (7T) Bioengineering Research Program heavily utilize a 7T human MRI – one of the most powerful imaging devices in the world.

“As MRI technology continues to become more powerful, the challenges associated with ultrahigh field imaging are exacerbated,” said Ibrahim. “The increased frequency of imaging at 7 Tesla can cause image inhomogeneities and heat to concentrate at certain locations in the head due to the presence of nonuniform electromagnetic fields. My lab works on designing and constructing devices that smooth those fields to improve the image quality and safety, and thereby, the utility of 7 Tesla Human MRI.”

The RF Research Facility created a “Tic-Tac-Toe” RF coil system of antennas that are tightly and uniquely arranged to fit the human head.  It was designed through extensive computer simulations using full wave electromagnetic software developed in the lab to optimize the antenna configuration.  The resulting device solves many of the issues associated with ultrahigh field MRIs, giving Pitt an edge in the field of neural imaging.

“Our coil system is a novel design that improves homogeneity, reduces power depositions in tissue, increases the speed of acquisition, and enhances resolution, not just in space, but also in time,” said Ibrahim. “We are able to provide superior neural imaging capabilities, which opens a lot of avenues to explore things unknown.”

Ibrahim has used this unique technology to establish interdisciplinary collaborations across the University, in particular with Pitt’s Department of Psychiatry.

A Glance Inside the Human Mind

Just across the street from the Benedum Hall, where bioengineering resides, is the Western Psychiatric Hospital of the University of Pittsburgh Medical Center (UPMC) - home to the Department of Psychiatry. In recent years, mental health research has become more dependent on imaging, and this work at Pitt has been enhanced with the technology developed by the RF Research Facility.

Aizenstein said, “Tamer’s technology has been helpful in moving this research forward because the key challenge in studying the aging brain and the neuropathological changes in aging is to look at the small vessels.”

Prior to the development of 7T MRI and Ibrahim’s technology, researchers had to rely on 1.5T or 3T images to see mechanistic changes in human disease, but with Ibrahim’s coil, they can now get a more in-depth look into how the brain works.

“Tamer’s 7T head coil allows you to see with much higher contrast very small microstructural changes that you couldn’t see with standard MRI,” explained Aizenstein. “This is really helpful in emerging models of Alzheimer’s disease because we think these small vessels play a big role. We also believe that accelerated aging is part of both depression and Alzheimer’s disease, and this technology allows us to better understand it.”

7T MRI was approved for clinical applications by the U.S. Food and Drug Administration in October 2017, which is a pivotal development for Ibrahim’s lab. His group has performed more than 1000 scans using the Tic-Tac-Toe RF coil system on patients/subjects, and with more than $35 million in total funding that utilizes this technology, they have budgeted another 2500 scans for various neurological and epidemiological studies.

“Our work is quite advanced in the translational aspect of research,” Ibrahim said. “Everything we do in the lab is applied to patient studies and is impacting the lives of people. No one is using 7T imaging the way we are doing it here at Pitt.”

The University has 20 active NIH research grants using this technology. The majority of these are collaborations between bioengineering and psychiatry, so in an effort to formalize this connection, Ibrahim and Aizenstein reached out to the National Institute for Mental Health (NIMH) for support to develop a predoctoral training program.

Ibrahim and Aizenstein recently received a $1.1 million grant from the NIMH to develop a unique multidisciplinary training program that prepares students with a background in engineering and other quantitative sciences for careers in mental health research. The NIMH wants to transform mental health care and recently published a strategic plan that, in part, seeks to develop new tools from the BRAIN initiative, apply computational approaches that may provide novel ways to understand relationships among datasets, and develop new and competing applications that target the NIMH research priority areas.

Pitt Bioengineering and Psychiatry, two nationally ranked departments, will join forces to train a new generation of students with a focus on both bioengineering and psychiatric research. By tapping into both quantitative and qualitative data, they hope that this training grant will forge collaborations, stimulate research in each field, and further strengthen the University’s leadership in biomedical and psychiatric research, with the ultimate goal of benefitting the human condition.

“Psychiatry is a field that has not been traditionally quantitative,” said Ibrahim, “and engineering is the opposite so I think there is a clear marriage between the two.”

Predoctoral trainees in this program will benefit from a dual mentorship with advisors from both the Swanson School of Engineering and the School of Medicine. Their research will focus on neuroimaging, neurostimulation, and neural engineering - all of which are widely used in mental health research including mood disorder, anxiety disorder, psychotic disorder, suicide, and cognitive impairment.

“With interdisciplinary work, there’s effort that comes with learning to speak to each other and appreciating other perspectives,” Aizenstein said, “but there is so much you gain from it, and that’s where it’s beneficial and fun.”

The announcement of this program has already sparked new collaborations between bioengineering and psychiatry, and the department leadership hopes that these collaborations will continue to grow and benefit both areas.

“This program will help stimulate the field of bioengineering given the complexity of the challenges in psychiatric research,” said Lewis. “I’m also hopeful that the collaborations and new investigators that emerge as the product of this program will, by harnessing complex datasets and new technologies, enhance precision medicine, create novel therapeutics and improve the clinical practice of psychiatry.”

“Tamer’s work and this unique collaboration with psychiatry puts Pittsburgh in a great position to become a leader in neural imaging,” said Sanjeev Shroff, distinguished professor and Gerald E. McGinnis Chair of Bioengineering. “I strongly believe that this training program will create a new breed of investigator who can tackle the fundamental biological questions in psychiatry using engineering (quantitative) approaches and I look forward to seeing how these collaborations will expand and produce cutting-edge research.”