PITTSBURGH (February 25, 2016) … Researchers at the University of Pittsburgh’s Swanson School of Engineering, along with collaborators at Penn State University’s Chemistry Department, have discovered a novel way of utilizing the chemical reactions of certain enzymes to trigger self-powered mechanical movement.

Dr. Balazs says: “Small-scale chemical synthesis and analysis commonly occur in fluid-filled chambers and require monitoring and intervention. Ideally, you would prefer that the process be as autonomous as possible.” According to Dr. Sen who made the initial discovery of enzyme pumps: “These pumps provide precise control over flow rate without the aid of an external power source and are capable of turning on in response to specific chemicals in solution. Hence, the surface-bound enzymes can be used to combine sensing and fluidic pumping into a single self-powered microdevice.”

Dr. Shum examined the factors that cause variations in density in the enzymatic reactions and developed a mathematical model. The model pinpointed where the relative density and relative diffusivity of the reagents and products controls the behavior, enabling him to map a parameter range where the fluid could move in different directions at different times.

“The reaction causes a change in the density of the fluid, leading to a fluid flow,” Dr. Shum explained. “It creates a chemo-mechanical transduction, which is a beautiful example of chemical energy creating mechanical action, much in the same way that the human body converts chemical energy from food into movement.”

Ms. Ortiz’s experiments at Penn State with urease enzyme agree with the Pitt simulations. Unlike other enzymes, which always pumped fluid in the same direction, urease generated an unexpected flow pattern, with the direction of flow changing over space and time. “It’s like hot air rising above a burning candle,” Ms. Ortiz explained. “With urease, it’s as if the air around the candle sinks for a finite time before starting to rise.”

Even more complex behavior could be built up using different enzymes placed at different locations to create a dynamic cascade of events. The resulting chemical reaction network is analogous to an electrical system in a computer. Since each enzyme will behave differently, a multistage chemical reaction could be “programmed” into an experiment, with each step generating flow as determined by the action of a specific enzyme.

“Much like Disney’s “The Sorcerer’s Apprentice,” where you could snap your fingers and have mops and brooms clean your room for you, it’s a scientist’s wish to create systems which behave autonomously and controllably,” Dr. Balazs said. As Ms. Ortiz points out: “The self-powered enzyme pumps could be used as self-regulated, stimuli-responsive, active, delivery vehicles.”

Top animation: An enzyme pump pushes particles away, then draws them in
Download the gif file here (4MB)
Description: Top-down view of the simulated fluidic chamber containing an enzyme pump (represented by a yellow circle in the center). The pump causes a fluid flow that carries small, green particles, which are located near the bottom surface of the chamber. The direction of flow near the bottom of the chamber is indicated by arrows and changes over time. Initially, the flow pushes particles away from the pump (in the blue region).  Later, the flow direction reverses and draws particles toward the pump (in the red region). 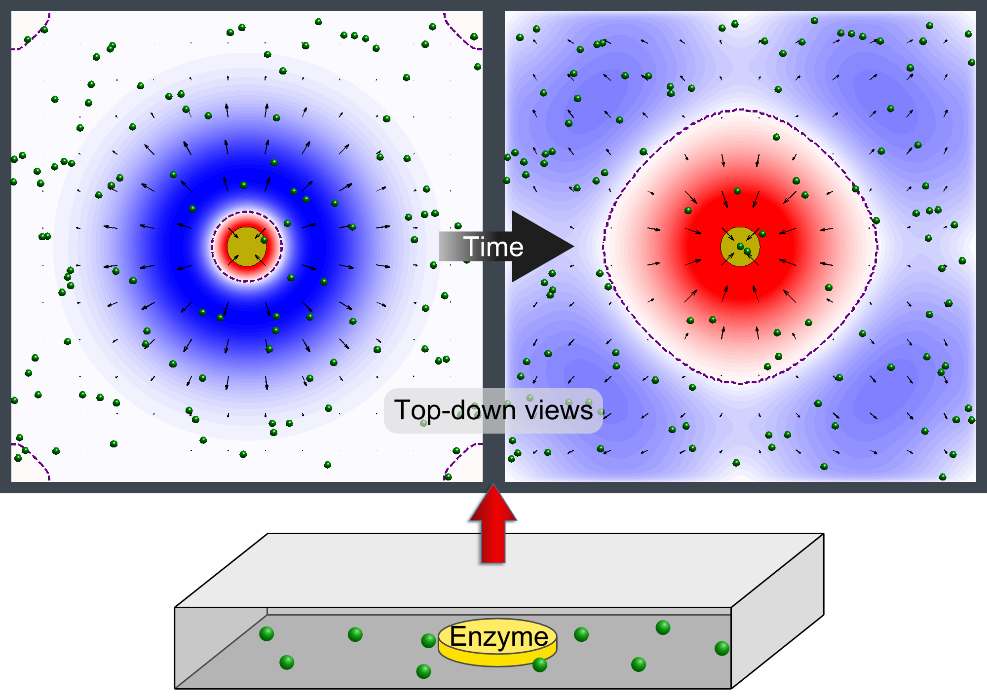 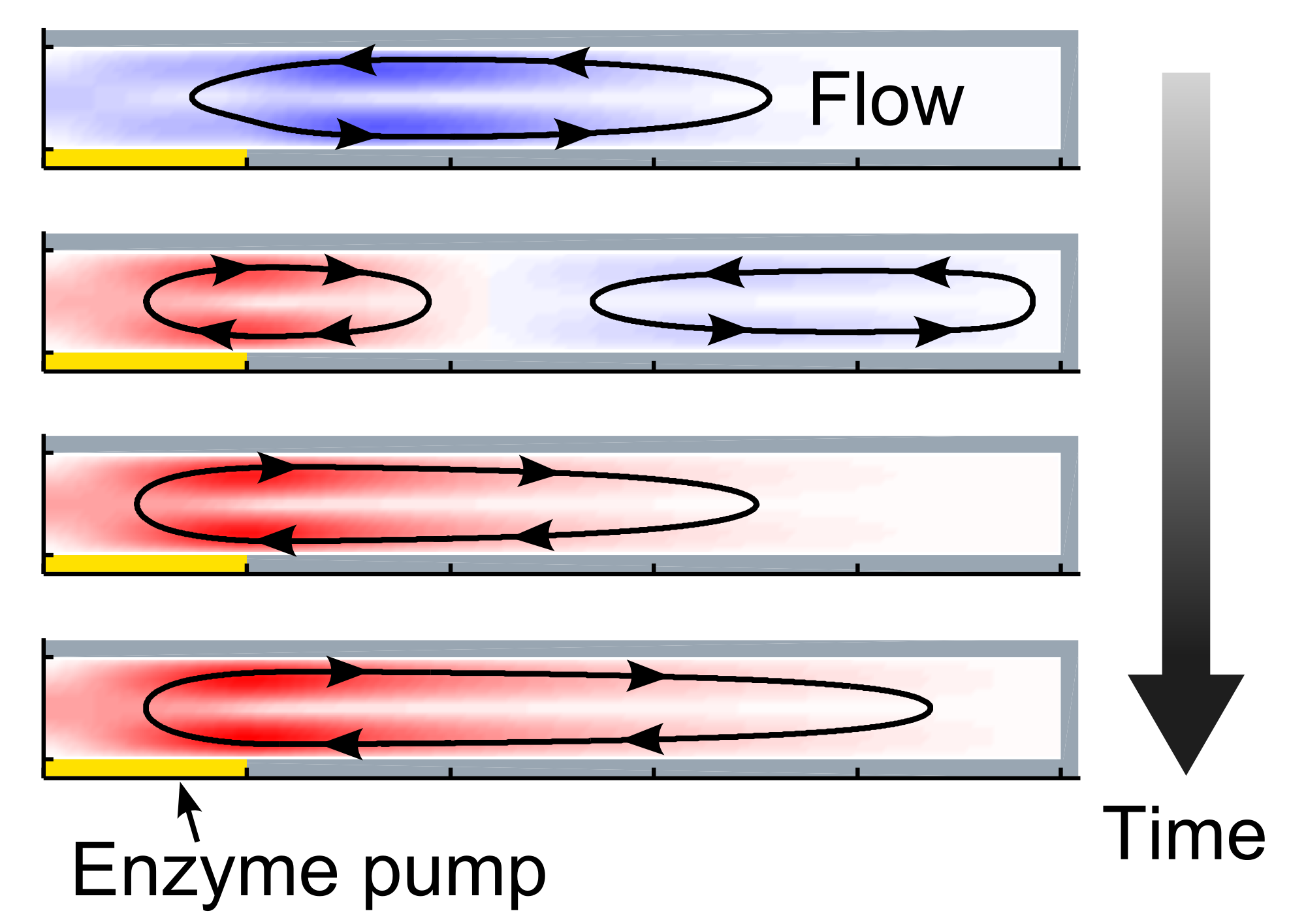 Bottom images: Pumping in two directions at once with an enzyme patch
Description: A patch of enzymes immobilized on a surface acts as a fluid pump. Fluid, and small particles (green spheres) carried by the fluid, can be simultaneously pumped away from the patch (blue) in some parts of the chamber and toward the patch (red) in other locations. This behavior changes over time and is due to fluid density changes that the reaction produces.