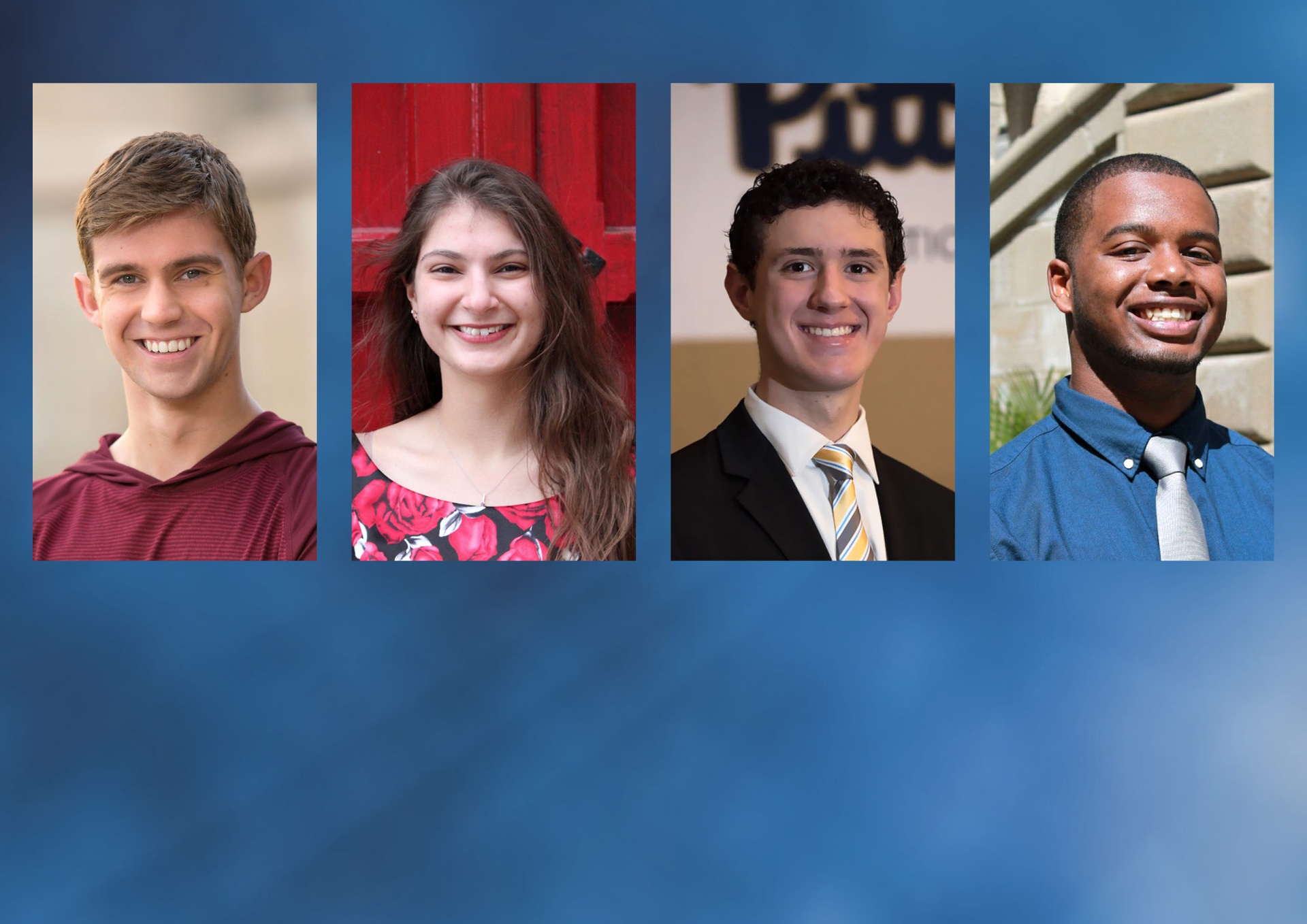 PITTSBURGH (Dec. 14, 2020) … The Institute of Electrical and Electronics Engineers (IEEE) Power and Energy Society (PES) selected four students from the University of Pittsburgh Swanson School of Engineering for its 2020-21 Scholarship Plus Award. Eli Brock, Sabrina Helbig, Anthony Popovski, and Maurice Sturdivant will each receive a financial award, one year of IEEE PES student membership, and mentorship from leading professionals in the power and energy industry.

The PES award recognizes high-achieving undergraduate electrical engineering students from across the nation, and over the last nine years, the Swanson School has consistently produced scholars in the program. Two of this year’s recipients -- Brock and Popovski -- are repeat scholars from the 2019-20 award program.

“For the second year in a row, the Swanson School has had the most IEEE PES scholars in the Mid-Atlantic region,” said Robert Kerestes, assistant professor of electrical and computer engineering at Pitt. “These awards are a testament to the strength of our undergraduate program and the quality of our students. I am proud of this achievement and look forward to seeing how these students tackle future challenges in the ever-changing power and energy industry.”

Brock’s work experience in the power and energy industry includes a summer 2019 internship at Pitt where he worked on decarbonization and on-site solar. He also participated in a summer 2020 internship with the Pacific Northwest National Labs where he worked with a building-energy simulation group. Brock continues to work for PNNL while also remaining involved in an energy simulation/optimization project at Pitt. He is in the Pitt Power and Energy Society Club (PES) and plans to pursue a career in research after attending graduate school.

Helbig participated in an internship with the Independent Verification & Validation (IV&V) group of Westinghouse Nuclear where she and her mentor created a training program on how to review the functionality of critical software and its adherence to requirements. She also did a co-op with Eaton where she performed design testing for commercial circuit breaker electronics, designed firmware to integrate Near Field Communication (NFC) technology into residential circuit breakers, and worked on an efficient, time-saving automation process for applications engineers.

In addition to her industry experience, Helbig was a TA for two ECE courses: Linear Circuits and Electronic Circuits. She currently serves as president of Pitt's chapter of IEEE Eta Kappa Nu and vice president of the student chapter of the IEEE Power and Energy Society. In January 2021, she will join the Swanson School’s electrical engineering graduate program where she will study electric power with Dr. Brandon Grainger.

Helbig is an inaugural recipient of the IEEE PES’s new named scholarship, the Anne-Marie Sahazizian Scholarship.

This past summer, Popovski performed an independent study research project in which he learned COMSOL Mulitphysics simulation software and developed 10 teaching modules planned to be implemented in Pitt’s undergraduate electromagnetic classes. He also submitted a paper to the American Society for Engineering Education for publication with his professor and another student.

Outside of the classroom, he is an ambassador for the Blue and Gold Society and has served as vice president of both the Engineering Business Administration and the two-time national champion Panther Hurling Club. He is also an Engineering Ambassador for the Swanson School. After graduation, he plans to earn his master’s degree, receive his professional engineering license, and work full-time as an electrical engineer in the power industry.

In 2019, Sturdivant participated in the Pitt EXCEL Summer Research Internship (SRI). During the internship, he worked under Dr. Brandon Grainger to study buck converter theory and application, circuit simulation tools, and the fundamentals of the engineering design process. In 2020, he received industry experience through two co-op rotations at GE Power Conversion.

Sturdivant serves as parliamentarian of the Pitt chapter of the National Society of Black Engineers and vice president of the Panther Amateur Radio Club. He is also actively involved in Pitt EXCEL and the Pitt chapter of IEEE. After graduation, he plans to pursue a master’s degree in electrical engineering before beginning a career in industry.