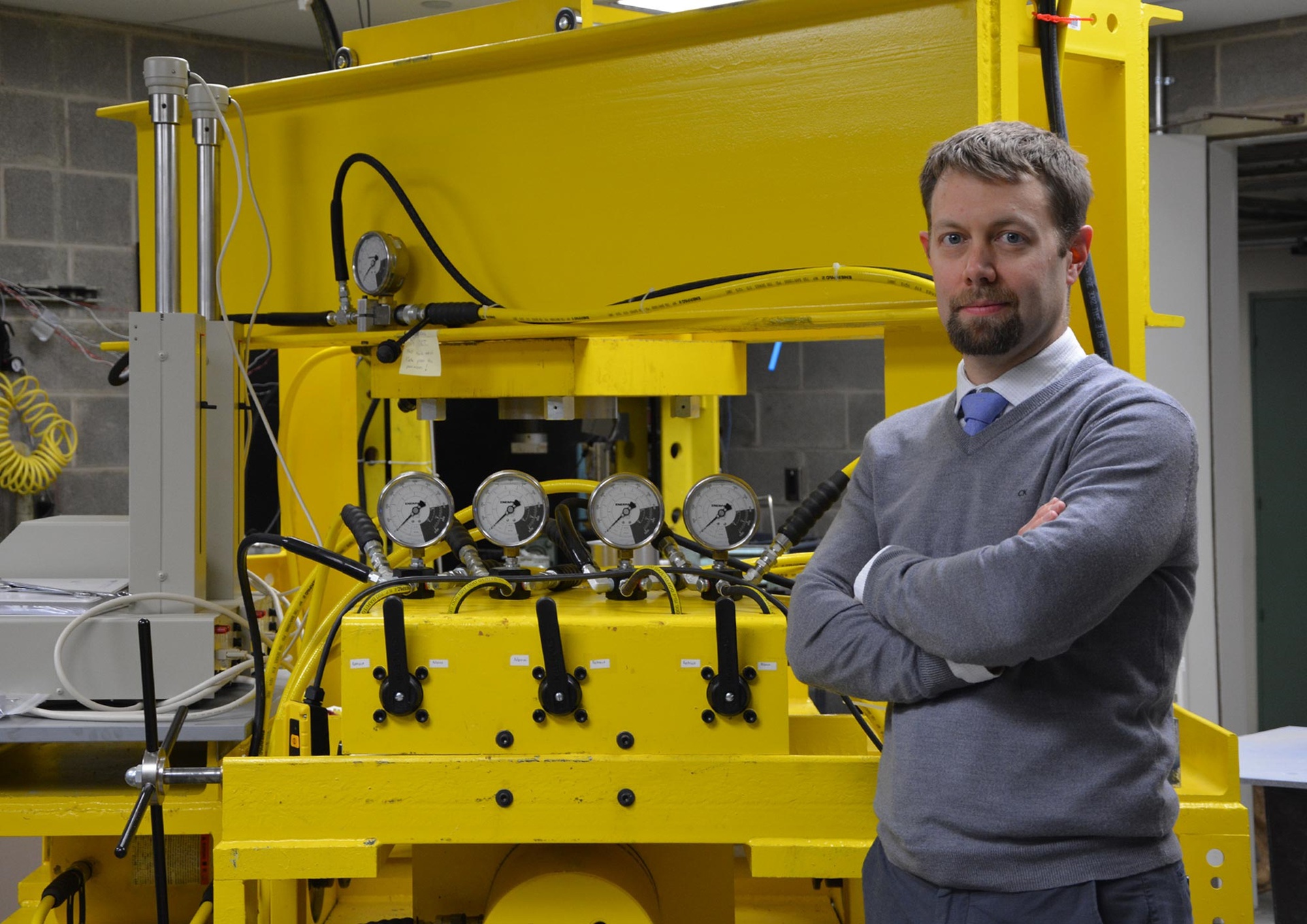 PITTSBURGH (January 19, 2017) … The Mackenzie Dike Swarm, an ancient geological feature covering an area more than 300 miles wide and 1,900 miles long beneath Canada from the Arctic to the Great Lakes, is the largest dike swarm on Earth. Formed more than one billion years ago, the swarm’s geology discloses insights into major magmatic events and continental breakup.

The Mackenzie Dike Swarm and the roughly 120 other known giant dike swarms located across the planet may also provide useful information about efficient extraction of oil and natural gas in today’s modern world. To explore how naturally-occurring dike swarms can lead to improved methods of oil and gas reservoir stimulation, the National Science Foundation (NSF) Division of Earth Sciences awarded a $310,000 award to Andrew Bunger, assistant professor in the Departments of Civil and Environmental Engineering and Chemical and Petroleum Engineering at the University of Pittsburgh’s Swanson School of Engineering.

Dike swarms are the result of molten rock (magma) rising from depth and then driving cracks through the Earth’s crust. Dike swarms exhibit a self-organizing behavior that allows hundreds of individual dikes to fan out across large distances. Although petroleum engineers desire to achieve the same effect when creating hydraulic fractures for stimulation of oil and gas production, the industrial hydraulic fractures appear far more likely to localize to only one or two dominant strands. This localization leaves 30-40 percent of most reservoirs in an unproductive state, representing an inefficient use of resources and leading to unnecessary intensity of oil and gas development.

In the study, “Self-Organization Mechanisms within Magma-Driven Dyke and Hydraulic Fracture Swarms,” Bunger will take a novel approach to understanding the mechanics of fluid-driven cracks, which he refers to as “geosciences-inspired engineering.” Like the growing field of biologically-inspired engineering, Bunger will be looking to processes in the natural world to better understand the constructed or engineered world.

“I would like to challenge myself and the geoscience community to look at naturally occurring morphologies with the eye of an engineer,” says Bunger. “The first part of the study will involve developing a mechanical model to explain the behavior of the dike swarms. We are borrowing from a theoretical framework developed in biology called ‘swarm theory,’ which explains the self-organizing behavior of groups of animals.”

Swarm theory, or swarm intelligence, refers to naturally and artificially occurring complex systems with no centralized control structure. The individual agents in the system exhibit simple or even random behavior, but collectively the group achieves emergent, or “intelligent,” behavior.

“One of the hallmarks of self-organizing behavior within swarms was recognized by swarm theory’s earliest proponents, who were actually motivated by developing algorithms to simulate flocks and herds in computer animation,” Bunger explains. “They proposed that all swarming behavior can be tied to the presence of three basic forces. One of these leads to alignment of the members with each other – it is what makes a flocking bird fly in the same direction as its neighbors. A second force is associated with repulsion – it keeps birds within a flock from running into each other and knocking each other out of the air. The third force is attraction – an often instinctive desire of certain animals to be near other animals of their own species, typically for protection from predators.”

“If you look at dike swarms,” Bunger continues, “They have been called ‘swarms’ for decades, but there has never been an effort to identify the mechanical origins of the three forces that are known to be present any place that swarming morphology is observed. When we view dikes in this way, we see that the alignment and repulsive forces have been recognized for years, although never placed in the broader context of their role in swarming. However, the origin of the attractive force is problematic. Why do all these dikes have any mechanical impetus to grow near each other? Because the mechanical origin of the attractive force has not been known, it is unclear why natural fluid-driven cracks – dikes – tend to exhibit swarming behavior while such an outcome is far less commonly observed in man-made fluid-driven cracks associated with hydraulic fracturing of oil and gas reservoirs.”

“We will use computational models and analogue experiments, which use artificial materials to simulate the Earth’s processes, to develop a new theory of fluid-driven crack swarms,” says Bunger. “Through this advance, we would like to improve the stimulation methods used for oil and gas production. This will be a win-win for both industry and our society that depends upon the energy resources they produce. Industry will benefit from more efficient methods, and society will benefit from lower energy costs and a decreased environmental footprint associated with resource extraction.”

In addition to a deeper understanding of the geological process that occur throughout Earth’s history, Bunger also sees his research impacting planetary research of Mars and Venus. Both rocky planets contain a large number of giant dike swarms. Understanding how the geometry of dike swarms relates to the conditions in the Earth’s crust at the time of emplacement will lead to a new method for ascertaining the little-known geological structure and history of Mars and Venus though analysis of the geometry of their many giant dike swarms.

Photo above: Dr. Bunger in his Benedum Hall lab with the newly-installed compression frame he uses to simulate the high-stress environment deep inside the Earth.