Getting the Full Scope 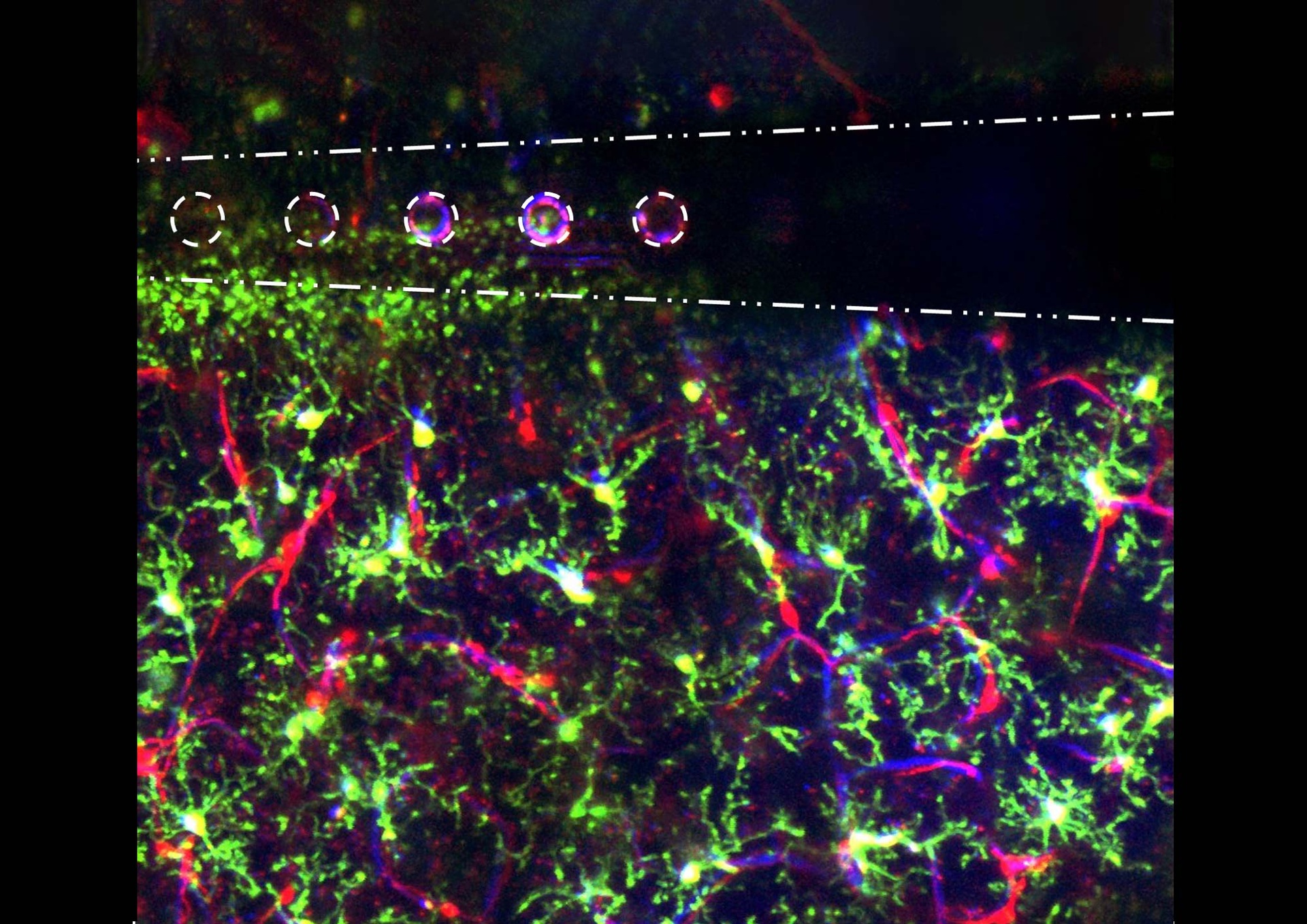 PITTSBURGH (Oct. 12, 2020) … A neural interface -- or brain-computer interface -- is a device that uses electrical stimulation to induce changes in brain activity. Among other applications, its positive effects are being leveraged to rehabilitate neurological conditions, such as Parkinson’s disease.

These implantable devices have recently been in the headlines with Elon Musk’s new company, Neuralink, which seeks to make tools to treat brain diseases and eventually expand to human enhancement.

But according to experts, there is still much to learn about this pioneering technology and how it affects this vital organ. Much like the ocean or the universe, there are many undiscovered functions of the brain, and the University of Pittsburgh’s Takashi D-Y. Kozai and Alberto Vazquez seek to further explore this scientific frontier.

The brain is composed of a variety of cells, each with its own set of properties. While neurons are the most well-known, there are many supportive cells that are necessary for proper function. Kozai will use a $3,051,391 BRAIN Initiative R01 award from the National Institutes of Health to investigate what drives neural interfaces’ beneficial effects by studying how stimulation affects non-neuronal brain cells over time.

Kozai and collaborators published research in Nature Biomedical Engineering that suggests that glial cells are more functional than previously thought.

“There isn’t much research on how electrical stimulation affects cells other than neurons in the brain, and there is mounting evidence that suggests glia and the vasculature play a large role,” said Kozai, assistant professor of bioengineering at Pitt’s Swanson School of Engineering.

“Our understanding of the brain has been limited by our focus on neurons, and this creates a significant barrier to the design of new and improved clinical applications and the interpretation of stimulation-induced effects in basic science research,” he continued.

The problem with studying this part of the brain is that the slow, dim signals of non-neuronal cells are much more difficult to detect than the vibrant electrical activity of neurons. Kozai’s solution is to use two-photon microscopy and optogenetics to investigate the inner workings of the brain.

“In single photon microscopy, you take a high energy photon and collide it with an electron, which pushes it to the next orbital, and as it falls down, it releases a fluorescent light,” Kozai explained. “The difficulty with this approach is the amount of out-of-focus fluorescence that saturates the image.

“With two-photon microscopy, you take two photons with half the energy and collide them simultaneously with the electron,” he continued. “This approach eliminates out-of-plane fluorescence and allows you to image deeper into the tissue.”

Imaging deeper into brain tissue is important because the first layer of the cortex does not contain neurons, and researchers must penetrate further to see how neurons and non-neuronal cells interact. With modern technology, the team can insert normal -- or even modified -- green fluorescent proteins that report cellular changes, such as calcium or neurotransmitter levels, into specific cell types and monitor their activity over time.

About the BIONIC Lab

Kozai’s BIONIC Lab, will use this project to build on their expertise in neural interface technology. In January 2020, he received a $1,652,844 NIH award to develop a wireless in vivo stimulation technology that will enable precise neural circuit probing while minimizing tissue damage. He also received a 2020 CAREER award from the National Science Foundation to advance neural interface design by studying how different types of stimulation impact neuronal subtype activity.

“We’re grateful for the opportunity to apply our experience and expertise to understanding some long-standing fundamental science questions at the brain-computer interface,” said Kozai. “These grants together give us an opportunity to ask some fundamental questions regarding the biological underpinning of neurostimulation and neuromodulation-related activity for a diverse set of cells in the brain.”

“In turn, this allows us to integrate how these diverse cell activities fit together in a system-of-systems engineering perspective,” he continued. “The long-ranged vision is to identify new relationships between these different cell types and how to synergistically modulate them to improve therapies for neurological diseases and brain injuries. Ultimately, this requires researchers from a diverse set of cultural and socioeconomic backgrounds.”

The BIONIC Lab is hiring: interested candidates should submit a statement on the alignment of the candidate’s research interest to the lab and relevant research experience, curriculum vitae, the names of three references, and date of availability to Professor Takashi Kozai (tdk18@pitt.edu).

Getting the Full Scope