DEARBORN, MICH. (November 21, 2017) … The Aquaponics Project, a University of Pittsburgh student group bent on sustainable urban farming, won the grand prize of $10,000 and a Ford Connect Transit Van at the 10th Annual Ford College Community Challenge to support their efforts to provide Pittsburghers with fresh, locally grown food. The Pitt team received an additional $25,000 for finishing in the top 10.

“The Ford Fund usually awards $25,000 to 10 universities each year,” says Kareem Rabbat, a sophomore studying environmental engineering at Pitt’s Swanson School of Engineering. “To celebrate the 10th anniversary of the competition, we were invited to the Ford World Headquarters in Michigan to compete with two other schools. We presented our proposal and won first prize in the final round.”

Rabbat is co-president of The Aquaponics Project student group, which aims to spread awareness of how aquaponics can be used to produce healthy food, even in densely populated urban areas. Last year, the group debuted a two-story, 160-square foot shipping container capable of producing 10,000 pounds of food annually in an almost entirely closed-loop system.

“Aquaponics is an incredibly self-sufficient method of growing food that can be traced back as far as the Aztec civilization,” Rabbat says. “The aquaponics facility was initially installed downtown near the Gateway T station. Its current location is next to the Home Depot in East Liberty. People can go inside to learn about the integrated food production system.”

The key to high crop yields in densely populated areas is swapping traditional agriculture with the combination of aquaculture and hydroponics. Aquaculture is the umbrella term for cultivating plants and animals in water, and hydroponics means growing plants in water rather than soil. Together, they work really well to create the low-energy, sustainable system of food production called “aquaponics.”

“The plants get nutrients from the fish waste and filter the water for the fish, allowing the water to continue cycling through the system,” explains Rabbat. “We use solar panels to power pumps that deliver water from the fish tank on the first floor to the plants on the second floor.”

Aquaponics can produce 10 times the amount of food per square foot than traditional farming, while using 70 percent less energy and 90 percent less water. The Aquaponics Project’s facility currently produces basil and tilapia, but a variety of different plants and fish can be used.

In 2012, the United States Department of Agriculture announced that more than 47 percent of Pittsburghers live in “food deserts” without access to affordable fruits, vegetables, or healthy whole foods. At the same time, 40 percent of food gets wasted globally, according to the Pittsburgh-based nonprofit 412 Food Rescue’s website. The Aquaponics Project will use the support from the Ford Fund to team up with 412 Food Rescue and help put discarded food to use rather than letting it slowly decompose in a landfill.

“Decomposing organic matter releases methane gas into the atmosphere,” says Rabbat. “Our winning proposal integrates our aquaponics facility with an anaerobic digester to decompose the organic matter collected from restaurants and food pantries around Pittsburgh. The cool thing about the anaerobic digester is that we can capture gas from the decomposing food and use it to power the facility.” 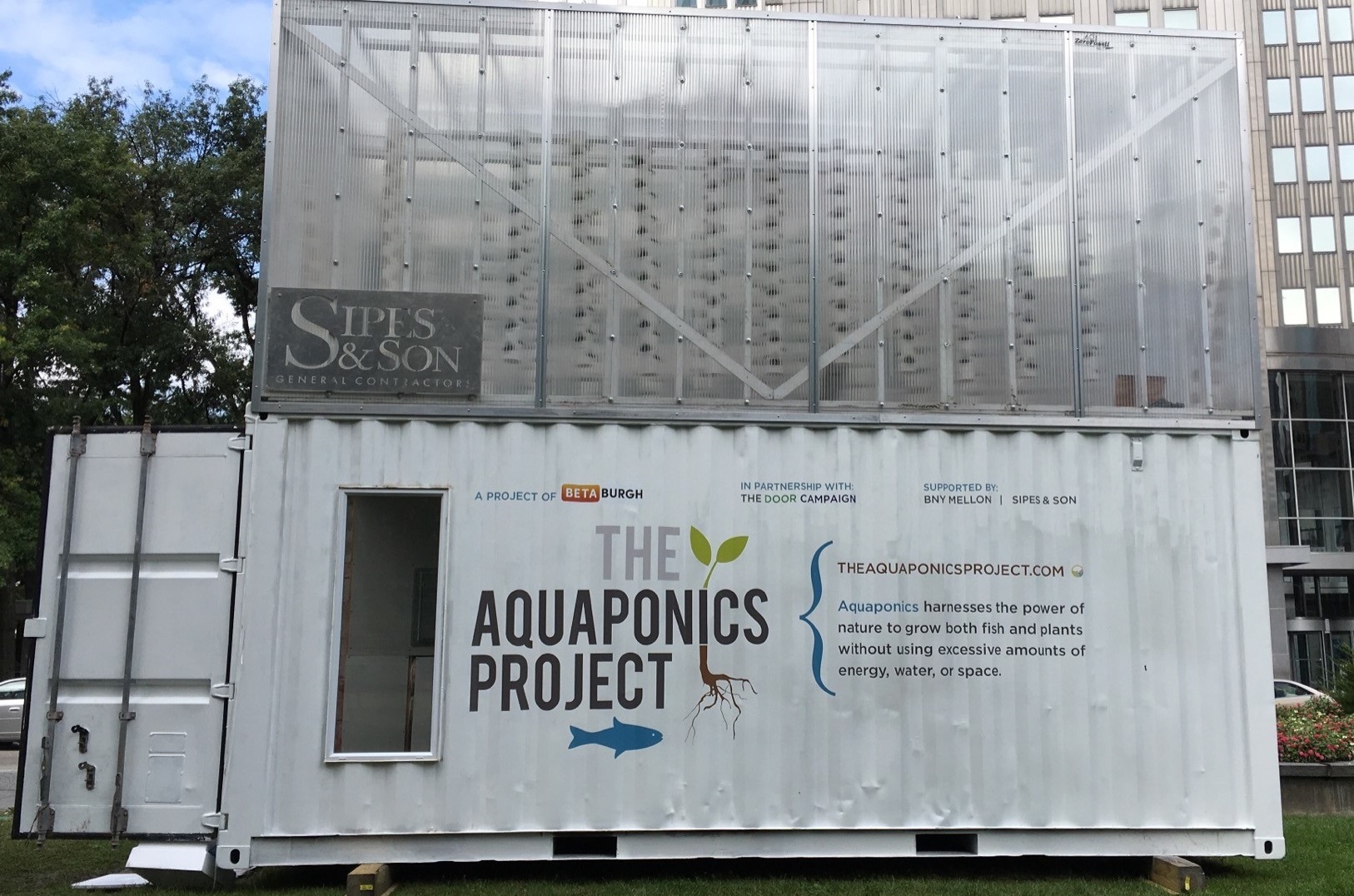 The group started the project to educate the local community about sustainable practices of food production and to implement these practices. After the deployment of their aquaponics facility, the team began to brainstorm ideas on how to mitigate food waste.

“By integrating an anaerobic digester into our facility we will not only able to produce fresh food, but also be able to transform food waste into clean energy and fertilizer,” says Rabbat. The team called their proposal “A 21st Century Food System,” as they are trying to use waste from one step of the food cycle as a resource in another.

“The facility currently sits next to a community garden in East Liberty, so we can distribute the fertilizer directly on their soil a few feet away,” says Rabbat. “The competition centered on how mobility solutions could be used to meet community needs, and I think we won first place because our idea to better circulate food production and disposal in urban environments really aligned with that mission.”