Reposted with permission from the University of Pittsburgh Center for Research Computing. Click here to read the original story.

Two images of MRI brain scans are displayed side-by-side on a poster in the Radiofrequency Research Facility in the basement of BST 3, one image marked 3T and one 7T. On the 7T image the hippocampus region of the brain displays a tracing of vessels not visible on the 3T image.

“You can clearly see a microstructure in the 7T scan that doesn’t appear in the 3T scan,”  post-doc Tales Santini points out. “That kind of detail is what our scanner system offers.”

That scanner is one of the most powerful MRI devices in the world – designated 7T  for 7 Tesla, a measure of the strength of an electromagnetic field (by comparison, Earth’s magnetic field is about 0.00065 T and a refrigerator magnet 0.01 T). MRI scanners in use are primarily 1.5 and 3 Tesla. The increased power of the 7 Tesla scanner reveals details not visible in typical MRI machines. With a resolution up to 180 microns – a micron is a millionth of a meter – the 7 Tesla can identify problems much earlier than existing scanners. 7 Tesla is particularly effective in early detection of brain issues implicated in diseases associated with aging, such as Alzheimer’s and late life depression, diseases which are a focus of the Radiofrequency Research Facility and the 7 Tesla Bioengineering Research program, directed by Tamer Ibrahim, professor of bioengineering, radiology, and psychiatry.

The increased frequency of the 7 Tesla represents challenges. If the electromagnetic waves do not enter the skull evenly in a uniform pattern, heat concentrates in individual areas of the brain, considerably raising their temperatures. The maximum possible heating allowed by the U.S.. Food and Drug Administration is one degree centigrade.

The lab is currently developing technology to smooth those electromagnetic waves using an array of 70 intricate radiofrequency antennas surrounding the head and neck, dubbed the Tic-Tac-Toe antenna owing to a nine-square grid marked with X’s and O’s displayed on the array’s housing. The team uses the Center for Research Computing to simulate hundreds of thousands of possible configurations of the antennas to create the most uniform possible waves.

“The wavelength of tissue is short, about 12 centimeters at 7 Tesla, while the human head is electrically large, about 20 cm front to back,” explains Ibrahim. “We must create a relatively homogenous magnetic field to image a head that is about twice the wavelength of the 7 Tesla in tissue. This is extremely challenging. Without a uniform field, the image quality and usefulness will significantly degrade, and the electrical field can localize and heat the tissue.” 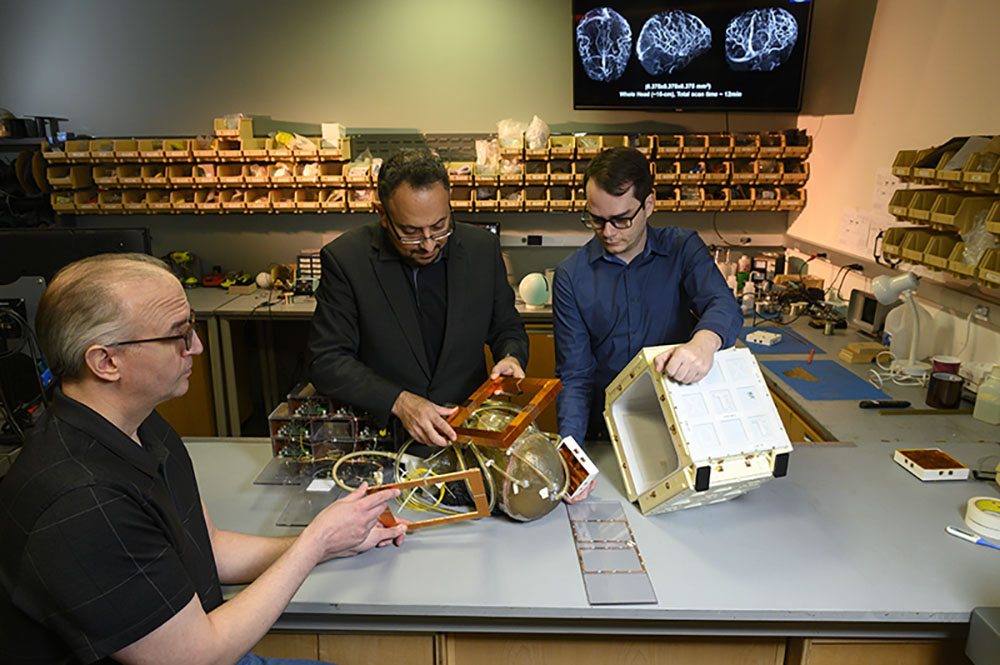 Now the computational problem. Hundreds of thousands of configurations of the Tic-Tac-Toe antennas must be modeled to optimize that balance of uniform imaging while minimizing the danger of heating before any testing. Each of the 70 antennas is simulated in the presence of the other 69 antennas, the electromagnetic fields from these simulations are combined – potentially in hundreds of millions of different ways - to form the most even, yet safe, magnetic field distribution.  “We use CRC to do the simulation and optimization of the coils, but also in processing human imaging data,” Santini explained.

The 7 Tesla scanner and Tic-Tac-Toe antennas are being heavily used in clinical studies. Ibrahim estimates that his team of 12 PhD students, several MS and BS students, two engineering staff, and two post-docs has performed 4,000 human head and neck scans between 2017 and 2024 looking at blood flow, cerebral spinal fluid, small vessels and microstructures in the hippocampus and other brain regions, all of which correlate with diseases like Alzheimer’s. The research is not limited to conditions associated with aging but includes major depressive disorder, schizophrenia, sickle cell, mild cognitive impairment, normal aging, late-life depression, dementia, psychosis, neurocognitive disparities, and linking personality to health, among others.

The Tic-Tac-Toe radiofrequency coil system has achieved breakthrough results in terms of image quality and consistency at 7 Tesla. The new capabilities are stimulating significant translational and collaborative research.  Through extensive collaborations with the Alzheimer Disease Research Center and the  Pitt departments of Psychiatry, Medicine, Epidemiology, Neurology, Psychology, and Anesthesiology, Ibrahim’s lab has attracted close to $40 million in grant funding over the last four years, including 17 National Institutes of Health grants.

A recent NIH award of over $3.75 million funds research by Ibrahim and collaborators in the Department of Psychiatry into developing new 7 Tesla technology to investigate relationships between preclinical Alzheimer’s disease and small vessel and cerebrospinal fluid conditions. Ibrahim is also central to an initiative of the departments of Bioengineering and Psychiatry to create a multidisciplinary training program for pre-doc bioengineering students to participate in mental health research, an initiative that recently received $1.1 million from the NIH.

“This is an exciting time,” says Ibrahim. “Our engineering innovations are being used on real patient studies. We’re not making something that just could be used some time in the future. We are impacting human life now.”