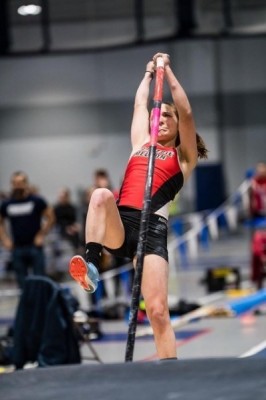 Michelle Karabin, a bioengineering PhD candidate at the University of Pittsburgh, received a $10,000 NCAA Postgraduate Scholarship award after four years of pole vaulting on Carnegie Mellon University’s track and field team. The NCAA awards 21 scholarships to men and women in each of the three sport seasons. Recipients must excel academically and athletically and be in their final year of college athletics.

Karabin is an All-American for the 2018 outdoor season and a two-time CoSIDA Academic All-America First Team selection. She also qualified for the 2020 NCAA Women's Indoor Track and Field Championships, which marked her second appearance at this annual event.

Balancing academic life with an athletic career is a challenge for many student-athletes, but Karabin soared to the top of the class. She is an NCAA Elite 90 winner, which is a recognition for the top student-athlete — with the highest cumulative grade-point average — at each of the 90 national championship levels.

“I was very grateful that CMU provided me the opportunity to pursue my passion for engineering and track and field,” she said.

Karabin, who received a BS in mechanical and biomedical engineering at CMU, now works in the Human Movement and Balance Laboratory focusing on balance in locomotion and the effects of vestibular loss.