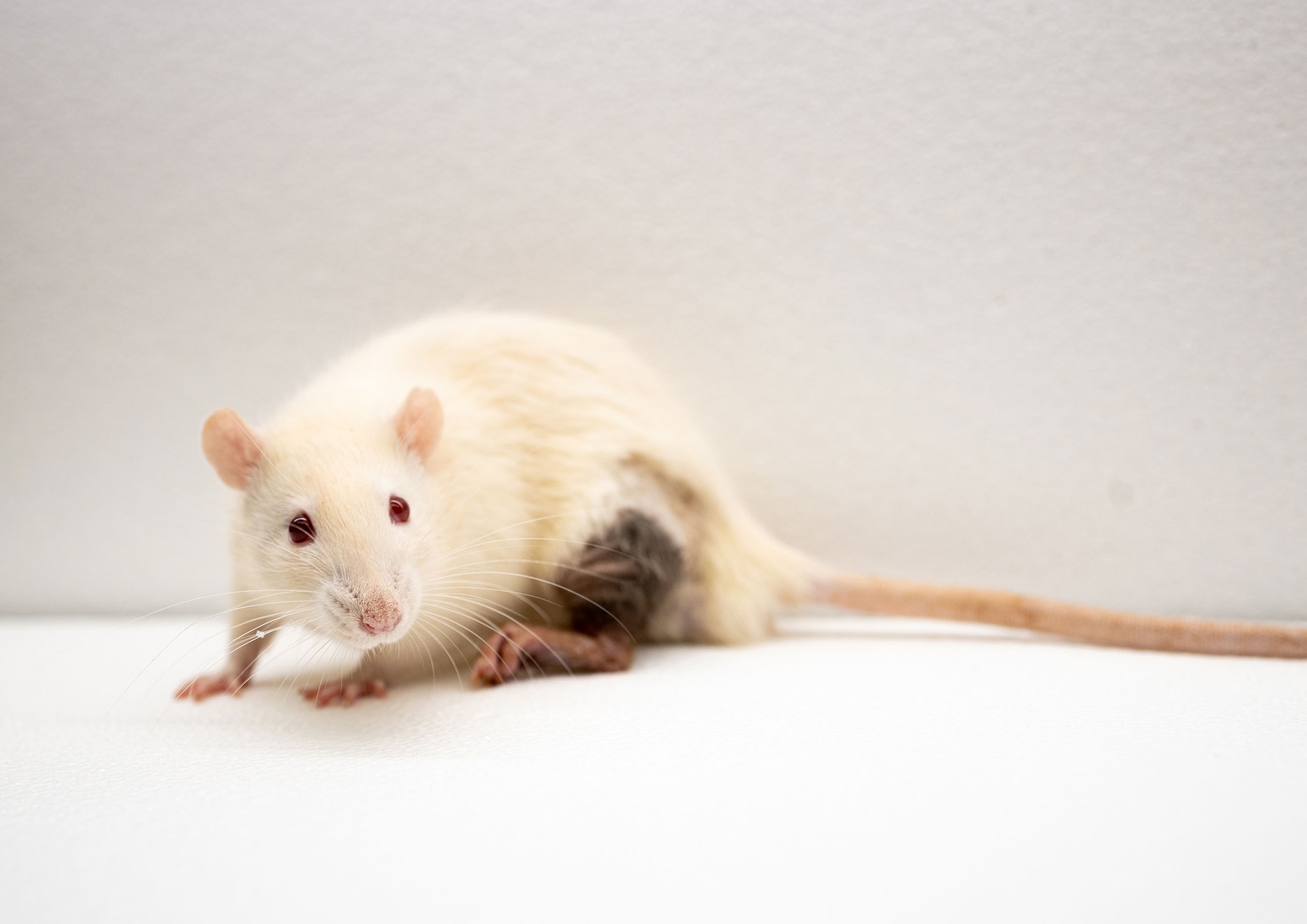 White Rat, Black Leg: This white rat received a donor leg from a black rat – a complete mismatch – and yet his body has been trained to accept the new limb as if it came from his twin. Best of all, his immune system remains intact. (UPMC)

PITTSBURGH – Inspired by a tactic cancer cells use to evade the immune system, University of Pittsburgh researchers have engineered tiny particles that can trick the body into accepting transplanted tissue as its own.

Rats that were treated with these cell-sized microparticles developed permanent immune tolerance to grafts — including a whole limb — from a donor rat, while keeping the rest of their immune system intact, according to a paper published today in Science Advances.

“It’s like hacking into the immune system borrowing a strategy used by one of humanity’s worst enemies to trick the body into accepting a transplant,” said senior author Steven Little, Ph.D., William Kepler Whiteford Endowed Professor and Chair of chemical and petroleum engineering in the Swanson School of Engineering at Pitt. “And we do it synthetically.”

The advantage of a synthetic approach rather than cell-based therapy, which is currently in clinical trials, is that the treatment logistics are much simpler.

“Instead of isolating cells from a patient, growing them up in the lab, injecting them back in and hoping they find the right location, we’re packaging it all up in an engineered system that recruits these naturally occurring cells right to the transplanted graft,” said lead author James Fisher, M.D., Ph.D., a postdoctoral researcher in the Pitt School of Medicine.

The microparticles work by releasing a native protein secreted by tumors, CCL22, which draws regulatory T cells (Treg cells) to the site of the graft, where they tag the foreign tissue as “self” so that it evades immune attack.

Microparticle-treated animals maintained healthy grafts for as long as they were monitored — a little under a year, equivalent to about 30 human years. All it took was two shots to effect seemingly permanent change.

In a companion paper published recently in PNAS, the researchers showed that these engineered microparticles can train the immune system of one strain of rat to accept a donor limb from a different strain. This new paper shows that the effects are specific to the intended donor. Skin grafts from a third strain were rapidly rejected.

Today, transplant patients take daily doses of immunosuppressant drugs to avoid rejection, leaving them vulnerable to cancer, diabetes, infectious diseases and a host of other ailments that come along with a weakened immune system.

“These drugs hammer the immune system into submission so it can’t attack the transplanted organ, but then it can’t protect the body either,” said coauthor Stephen Balmert, Ph.D., a postdoctoral researcher in the Pitt School of Medicine. “We’re trying to teach the immune system to tolerate the limb, so that a transplant recipient can remain immunocompetent.”

The risks of lifelong immunosuppression are particularly problematic when the transplant isn’t a life-saving procedure. Doctors and patients have to consider whether the benefits outweigh the risks.

“The ability to induce transplant tolerance while avoiding systemic immunosuppression, as demonstrated in these innovative studies, is especially important in the context of vascularized composite transplantation where patients receive quality-of-life transplants, such as those of hands or face,” said coauthor Angus Thomson, Ph.D., professor of surgery and immunology in the Thomas E. Starzl Transplantation Institute at Pitt.