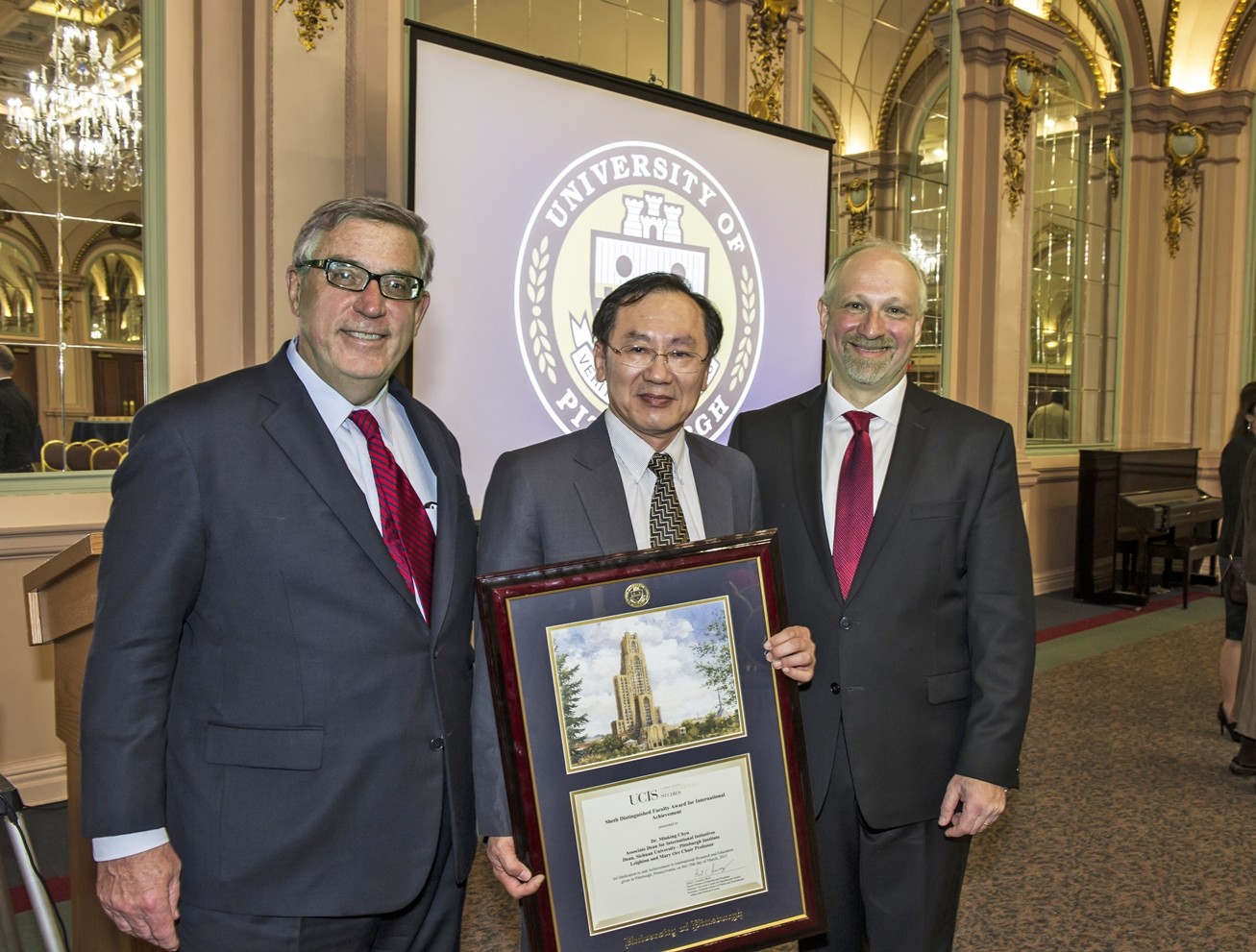 Dr. Chyu recognized for his contributions to furthering international education at Pitt

PITTSBURGH (March 19, 2014) … Recognizing his contributions to furthering international education at the University of Pittsburgh, Minking Chyu, PhD received the 2015 Sheth Distinguished Faculty Award for International Achievement at a reception on March 18, 2015. Dr. Chyu is the Leighton and Mary Orr Chair Professor of Mechanical Engineering and Materials Science and inaugural Associate Dean for International Initiatives at the Swanson School of Engineering, and the inaugural Dean of the Sichuan University-Pittsburgh Institute (SCUPI) in China.

"Minking Chyu is the consummate global engineering educator," says Dr. Jagdish Sheth, University of Pittsburgh alumnus (BUS '62, '66) who, with his wife Madhuri, promotes global thinking and international endeavors through the Sheth Family Foundation. "In a career spanning 30 years, he has shown a deep desire to equip students with the engineering and global skills needed for success anywhere in the world. He will bring those same talents to the first cohort of students at the Sichuan University-Pittsburgh Institute."

About Dr.Chyu
Minking K. Chyu received his PhD in Mechanical Engineering from the University of Minnesota in 1986. He was a faculty member at Carnegie Mellon University for 14 years before joining the University of Pittsburgh in 2000 as the Leighton Orr Chair Professor and Department Chair of Mechanical Engineering. When the departments of Mechanical Engineering and Materials Science and Engineering merged in 2006, Dr. Chyu helped to lead the process and was named chair of the combined MEMS Department. His primary research is in thermo-fluid issues relating to power and propulsion systems, manufacturing and material processing. Major projects conducted to date include convective cooling of gas turbine airfoils, nanofluid applications in heat transfer and oil/gas exploration, thermoelectric energy conversion and additive manufacturing.

Dr. Chyu was awarded four NASA Certificates of Recognition for his contribution on the U.S. space shuttle program, and has also served as an Air Force Summer Research Fellow, Department of Energy Oak Ridge Research Fellow, and Department of Energy (DOE) Advanced-Turbine-System Faculty Fellow. He is a Fellow of the American Society of Mechanical Engineers (ASME), Associate Fellow of American Institute of Aerospace and Aeronautics (AIAA), and a member of the Scientific Council of the International Centre of Heat and Mass Transfer (ICHMT). He was named the Engineer of The Year by the ASME Pittsburgh Chapter in 2002. In 2007, he was appointed as Institute of Advanced Energy Solutions (IAES) Residence Fellow by the National Energy Technology Laboratory (NETL). He served as an Associate Editor for the Journal of Heat Transfer, ASME; Advisory Board Member for the International Journal of Fluid Machinery and Systems; and a Foreign Editor for the International Journal of Chinese Institute of Mechanical Engineers. He has published 290 technical papers in archived journals and conference proceedings.

About Dr.Sheth
Dr. Jagdish N. Sheth is a renowned scholar and world authority in the field of marketing. His insights on global competition, strategic thinking and customer relationship management are considered revolutionary.

He is the Charles H. Kellstadt Chair of Marketing in the Goizueta Business School at Emory University. Prior to this, he was a distinguished faculty member at the University of Southern California, the University of Illinois, Columbia University and the Massachusetts Institute of Technology.

Dr. Sheth is nationally and internationally known for his scholarly contributions in consumer behavior, relationship marketing, competitive strategy and geopolitical analysis. He has worked for numerous industries and companies in the United States, Europe and Asia, both as an Advisor and as a Seminar Leader. His clients include AT&T, BellSouth, Cox Communications, Delta, Ernst & Young, Ford, GE, Lucent Technologies, Motorola, Nortel, Pillsbury, Sprint, Square D, 3M, Whirlpool and many more. He has offered more than a thousand presentations in at least twenty countries.

In addition to his academic pursuits, Dr. Sheth works diligently to promote global thinking and international endeavors through The Sheth Foundation. It is because of this mission and his generosity that we accept nominations every spring for two awards that will benefit the University of Pittsburgh community and recognize commitments to the international community.