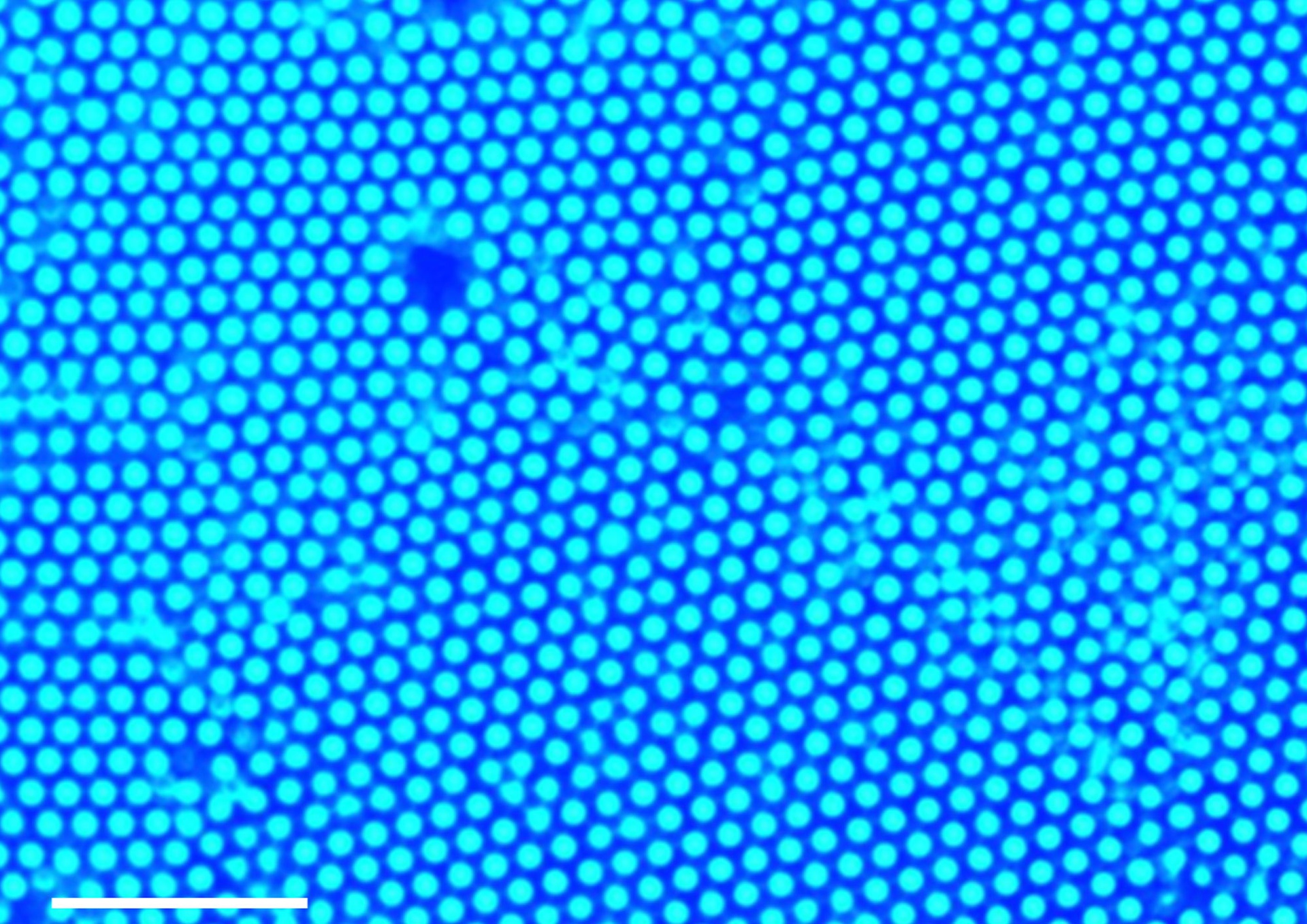 A new method uses ultraviolet light and small amounts of gold or titanium dioxide nanoparticles to gather larger particles at the point of light. This method was used to gather polystyrene particles, which form a well-packed structure called a colloid crystal, as depicted in this image. Credit: Sen Lab, Penn State
Image above

A new method uses ultraviolet light and small amounts of gold or titanium dioxide nanoparticles to gather larger particles at the point of light. This method was used to gather polystyrene particles, which form a well-packed structure called a colloid crystal, as depicted in this image. Credit: Sen Lab, Penn State

STATE COLLEGE, Pa. (January 22, 2019) ... A new, simple, and inexpensive method that uses ultraviolet light to control particle motion and assembly within liquids could improve drug delivery, chemical sensors, and fluid pumps. The method encourages particles—from plastic microbeads, to bacterial spores, to pollutants—to gather and organize at a specific location within a liquid and, if desired, to move to new locations. A paper describing the new method appears in the journal Angewandte Chemie ("Organization of Particle Islands Via Light‐Powered Fluid Pumping," DOI: 10.1002/anie.201811568.)

“Many applications related to sensors, drug delivery, and nanotechnology require the precise control of the flow of fluids,” said Ayusman Sen, Distinguished Professor of Chemistry at Penn State and senior author of the paper. “Researchers have developed a number of strategies to do so, including nanomotors and fluid pumps, but prior to this study we did not have an easy way to gather particles at a particular location so that they can perform a useful function and then move them to a new location so they can perform the function again.

“Say for example you want to build a sensor to detect particles of a pollutant, or bacterial spores in a water sample,” said Sen. “With this new method, we can simply add nanoparticles of gold or titanium dioxide and shine a light to encourage the pollutant particles or spores to gather. By concentrating them in one spot, they become easier to detect. And because light is so easy to manipulate, we have a high degree of control.”

The new method first involves adding a small amount of titanium dioxide or gold nanoparticles to a liquid, like water, that also contains larger particles of interest, like pollutants or beads carrying a payload. Shining a light at a specific point in the liquid heats up the tiny metal nanoparticles, and the heat is then transferred to the fluid. The warmer liquid then rises at the point of light —just as warm air rises in a chilly room—and cooler water rushes in to fill the space that the warm water just left, bringing the larger particles with it.

“This causes the larger particles to collect at the point of UV light, where they form closely packed, well-organized structures called colloidal crystals,” said Benjamin Tansi, graduate student in chemistry at Penn State and first author of the paper. “Changing the intensity of the light or the amount of titanium dioxide or gold particles alters how quickly this process occurs.”

Using the new method, the researchers gather particles of interest into an organized structure at the point of light (left). When the light is moved to a new location (right), the particles move toward the new point of light, as depicted in this video. Credit: Sen Lab, Penn State

“This process is most efficient when gold nanoparticles are used, but we wanted to find an alternative that was less expensive and more accessible,” said Tansi. “We were pleased to find that this method also works with titanium dioxide, an inexpensive and harmless nanoparticle used in cosmetics and as a food additive.”

In addition to water, the researchers demonstrated the effectiveness of this method in hexadecane, an organic liquid.

“Particles usually don’t assemble very well in salty or non-aqueous environments because everything sticks together,” said Sen. “But here we show that particles can assemble using this method in hexadecane, which suggests we may be able to apply this technique in, for example, biological fluids. To our knowledge this is the first demonstration of light-driven fluid pumping in an organic medium.”

Members of the research team at the University of Pittsburgh led by Anna Balazs used mathematical models to describe the dynamics of the system. In addition to describing how particles move in the system, the models confirm that only a minor change in temperature—less than a degree Celsius—from the ultraviolet light is required to induce the fluid flow.

The research team is currently testing the limits of this method, for example if particles can move uphill toward the light source or if the method can be used to sort particles by size.

“We knew that heating gold nanoparticles in suspension could create a fluid flow,” said Tansi, “but prior to this study no one had looked to see if these kinds of thermally-driven fluid flows could be used to do anything useful. Because ultraviolet light and titanium dioxide are so easy to control, we think this method could be harnessed in various technologies in the future. For example, a fluid pump that relies on this method could potentially replace the bulky and more expensive traditional pumps that require a power source or that rely on magnetics or mechanical movement to function.”

In addition to Sen, Tansi, and Balazs, the research team includes Matthew Peris at Penn State and Oleg Shklyaev at the University of Pittsburgh. This work was funded by the National Science Foundation (NSF-CCI Award Number 1740630).