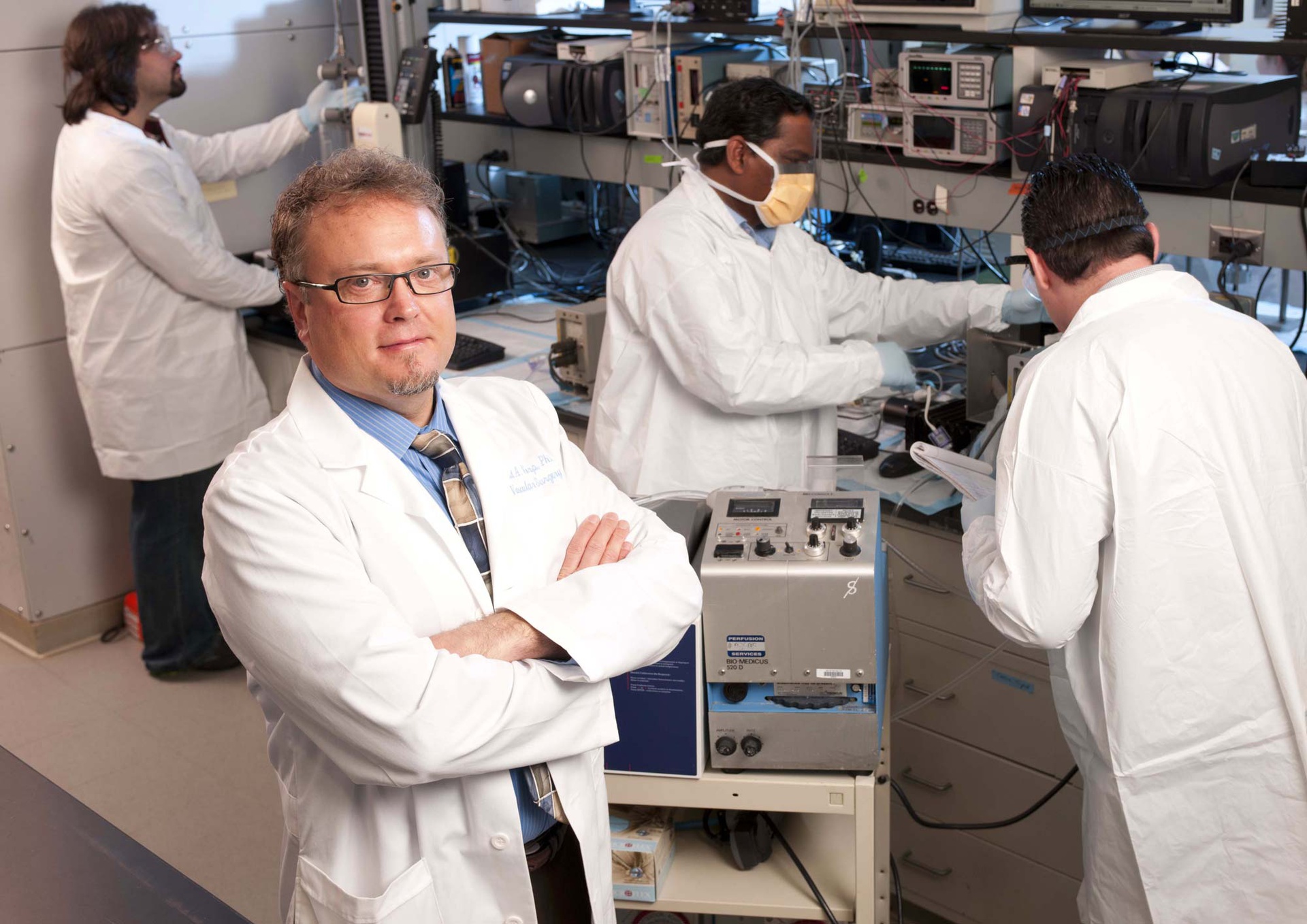 PITTSBURGH (April 28, 2016) … The National Institutes of Health have awarded David Vorp, the William Kepler Whiteford Professor of Bioengineering and Associate Dean for Research of the Swanson School of Engineering at Pitt, with a two-year, $417,838 R21 grant for research into the use of cells from a patient’s own adipose (fat)  as vascular grafts in arterial bypass surgery. This new method, which has been successful in rat subjects, would allow surgeons to perform bypass surgeries without harvesting arteries or veins from the patient or requiring the time to isolate and grow a specific cell type, such as a stem cell.

Coronary bypass procedures often use other arteries or veins as a source for grafts. Arteries that can be used safely as a bypass graft in a different location are in short supply. The great saphenous vein in the leg is one of the most common sources for arterial grafts, but re-purposing veins as arterial bypass grafts can cause complications.

“The vein graft, even though it is the most widely used graft material for the coronary or other small diameter artery applications, is not ideal,” said Vorp. “The problem is that veins are not arteries; they are built differently because they have different purposes in the body. Arteries pulse, and they are under higher pressure than veins. When you take a vein segment and put it under arterial conditions, it responds by thickening, which can cause the same blockage you were trying to treat.”

Vorp’s study, “An Autologous, Culture-free Adipose Cell-based Tissue Engineered Vascular Graft,” will explore ways to facilitate the translation of technology that has been under development by Dr. Vorp and his associates for a number of years. The current methodology requires stem cells to be carefully extracted from the fat and then spend time in culture before constructing a graft, which itself spends time in additional culture. This new research will explore the potential for skipping the culture steps entirely, first by using all of the fat cells from the patient (instead of isolating and expanding the stem cells alone) and then by implanting the graft immediately instead of culturing it first. The Pitt researchers will also design a way to “scale-up” the process that creates their engineered graft. The method used for small-scale grafts in rats won’t work when the construct is enlarged to a human-scale.

“The key focus of the study is the translational aspects,” said Vorp. “We have shown that we can regenerate a small-diameter aorta in a rat that functions for up to a year. We now need to determine how to overcome some logistical issues so that we can use this technology to help human patients, which is why we started the research in the first place. This R21 grant is really facilitating the start of that process.”

R21 research grants are designated for exploratory/developmental research, generally still in the conceptual stage. They are often awarded to high risk and high reward studies that have the potential to become much larger in scope. J. Peter Rubin, University of Pittsburgh Medical Center Endowed Professor, Chair of Plastic Surgery and Professor of Bioengineering, as well as William R. Wagner, director of Pitt’s McGowan Institute for Regenerative Medicine and Professor of Surgery, Bioengineering and Chemical Engineering, will collaborate with Vorp on the study.

“This grant is another manifestation of the great environment here at Pitt where you have no walls between engineering, science and clinical medicine. Research is really well integrated, and partnerships are encouraged,” said Vorp.