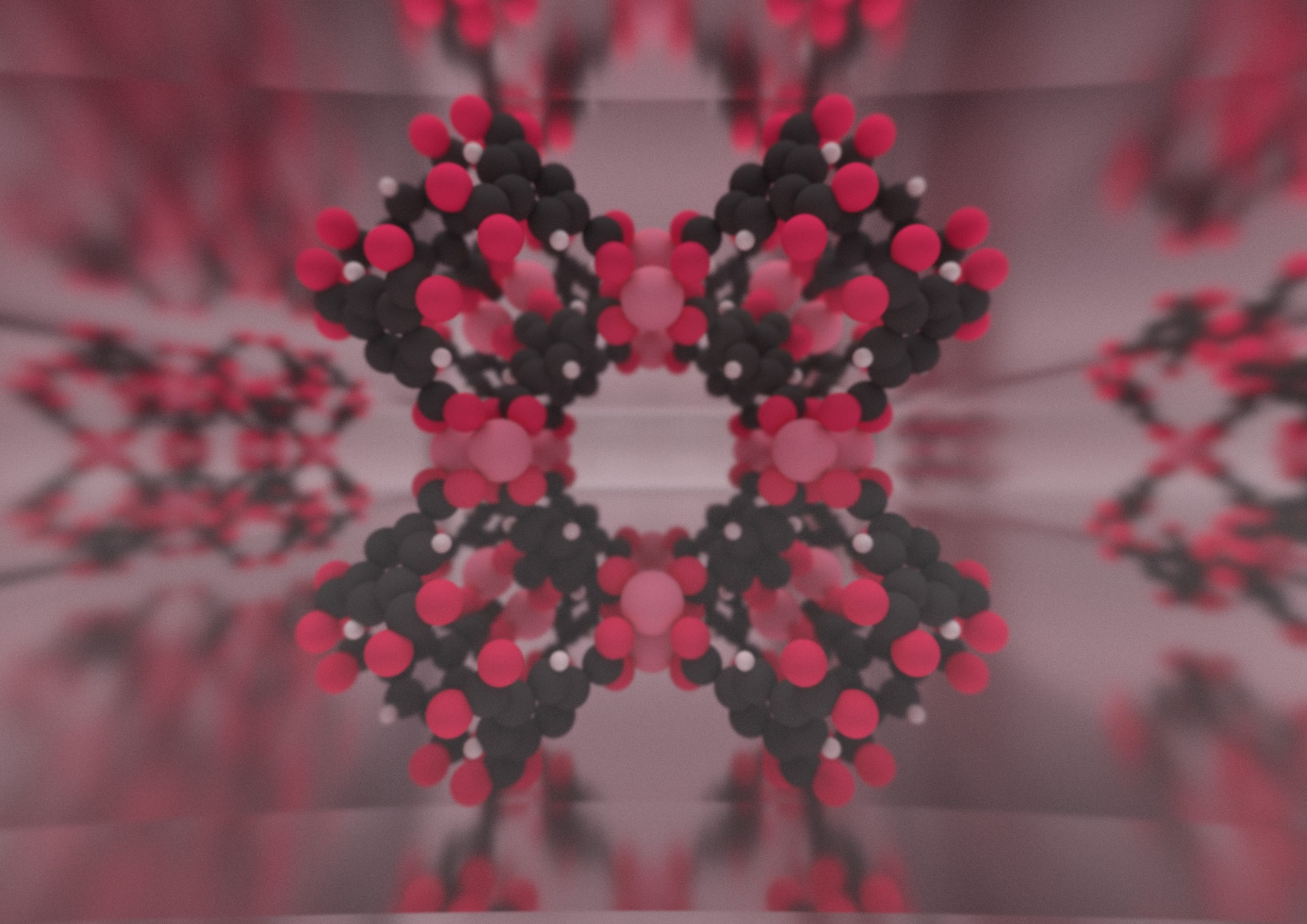 Depiction of a metal-organic framework (HKUST-1) embedded in a polymer matrix to be used as a membrane for efficient gas separations. (Kutay Sezginel)

PITTSBURGH (January 8, 2019) … A computational modeling method developed at the University of Pittsburgh’s Swanson School of Engineering may help to fast-track the identification and design of new carbon capture and storage materials for use by the nation’s coal-fired power plants. The hypothetical mixed matrix membranes would provide a more economical solution than current methods, with a predicted cost of less than $50 per ton of carbon dioxide (CO2) removed.

“Polymer membranes have been used for decades to filter and purify materials, but are limited in their use for carbon capture and storage,” noted Dr. Wilmer, who leads the Hypothetical Materials Lab at the Swanson School. “Mixed matrix membranes, which are polymeric membranes with small, inorganic particles dispersed in the material, show extreme promise because of their separation and permeability properties. However, the number of potential polymers and inorganic particles is significant, and so finding the best combination for carbon capture can be daunting.”

According to Dr. Wilmer, the researchers built upon their extensive research in metal-organic frameworks (MOFs), which are highly porous crystalline materials created via the self-assembly of inorganic metal with organic linkers. These MOFs, which can store a higher volume of gases than traditional tanks, are highly versatile and can be made from a variety of materials and custom designed with specific properties.

Dr. Wilmer and his group explored existing databases of hypothetical and real MOFs for their research, resulting in more than one million potential mixed matrix membranes. They then compared the predicted gas permeation of each material with published data, and evaluated them based on a three-stage capture process. Variables such as flow rate, capture fraction, pressure and temperature conditions were optimized as a function of membrane properties with the goal of identifying specific mixed matrix membranes that would yield an affordable carbon capture cost.

The potential implications for the Wilmer group’s research are tremendous. Although coal-generated power plants in the U.S. alone currently represent only 30 percent of nation’s energy portfolio, in 2017 they contributed the largest share of 1,207 million metric tons of CO2, or 69 percent of the total U.S. energy-related CO2 emissions by the entire U.S. electric power sector. (Source: U.S. Energy Information Administration)

“Our computational modeling of both hypothetical and real MOFs resulted in a new database of more than a million mixed matrix membranes with corresponding CO 2 capture performance and associated costs,” Dr. Wilmer said. “Further techno-economic analyses yielded 1,153 mixed matrix membranes with a carbon capture cost of less than $50 per ton removed. Thus, the potential exists for creating an economically affordable and efficient means of CO2 capture at coal power plants throughout the world and effectively tackling a significant source of fossil fuel-generated carbon dioxide in the atmosphere.”

This technical effort was performed in support of the National Energy Technology Laboratory's ongoing research under RES contract DE-FE0004000. Funding was provided in part from the U.S. National Science Foundation (NSF award CBET-1653375).