PITTSBURGH (December 12, 2018) … Although the use of renewable energy is on the rise, coal and natural gas still represent the majority of the United States energy supply. Even with pollution controls, burning these fossil fuels for energy releases a tremendous amount of carbon dioxide into the atmosphere - in the U.S. alone, coal and natural gas contributed 1,713 million metric tons of CO2, or 98 percent of all CO2 emissions from the electric power sector in 2017.1  In an effort to mitigate these effects, researchers are looking for affordable ways to capture carbon dioxide from power plant exhaust.

"Our approach is very different than the traditional method of capturing carbon dioxide at a power plant,” said Katherine Hornbostel, assistant professor of mechanical engineering at Pitt’s Swanson School of Engineering. “Instead of flowing a chemical solvent down a tower (like water down a waterfall), we are putting the solvent into tiny microcapsules.”

Similar to containing liquid medicine in a pill, microencapsulation is a process in which liquids are surrounded by a solid coating.

“In our proposed design of a carbon capture reactor, we pack a bunch of microcapsules into a container and flow the power plant exhaust gas through that,” said Hornbostel. “The heat required for conventional reactors is high, which translates to higher plant  operating costs. Our design will be a smaller structure and require less electricity to operate, thereby lowering costs.”

Conventional designs also use a harsh amine solvent that is expensive and can be dangerous to the environment. The microcapsule design created by Hornbostel and her collaborators at LLNL uses a solution that is made from a common household item.

“We’re using baking soda dissolved in water as our solvent,” said Hornbostel. “It’s cheaper, better for the environment, and more abundant than conventional solvents.  Cost and abundance are critical factors when you’re talking about 20 or more meter-wide reactors installed at hundreds of power plants.”

Hornbostel explained that the small size of the microcapsule gives the solvent a large surface area for a given volume. This high surface area makes the solvent absorb carbon dioxide faster, which means that slower absorbing solvents can be used. “This is good news,” says Hornbostel, “because it gives cheaper solvents like baking soda solution a fighting chance to compete with more expensive and corrosive solvents.” 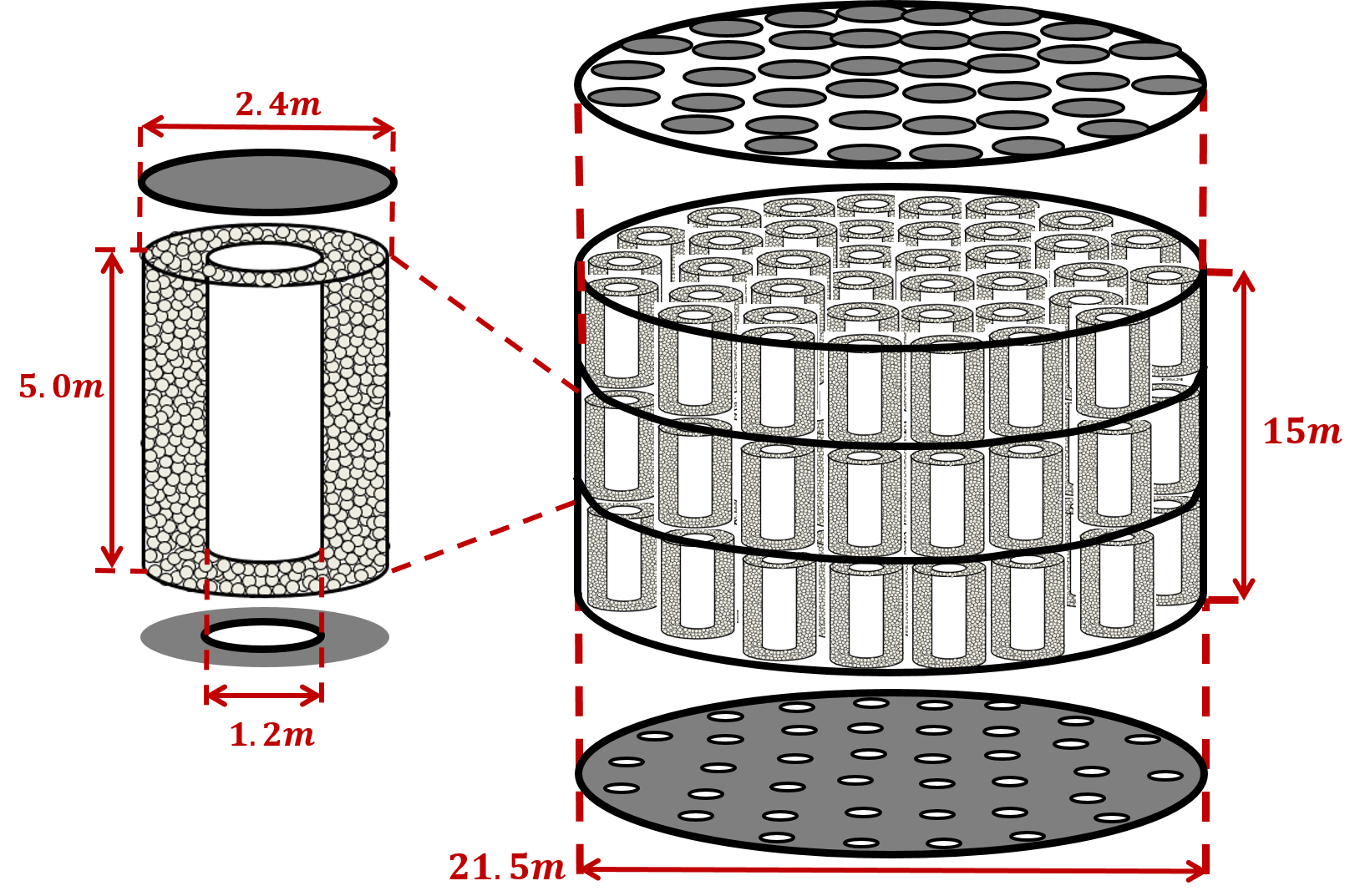 Proposed design of a carbon capture reactor filled with baking soda capsules for a 500 MW coal power plant. Power plant exhaust is sent to hundreds of cylinders packed together (shown on right). Each cylinder (shown on left) is a hollow cylinder that lets exhaust gas flow through the core, then out through a packed bed of capsules.

“Our proposed microcapsule technology and design are promising for post-combustion carbon capture because they help make slow-reacting solvents more efficient,” said Hornbostel. “We believe that the decreased solvent cost combined with a smaller structure and lower operating cost may help coal and natural gas power plants maintain profits long-term without harming the environment.”