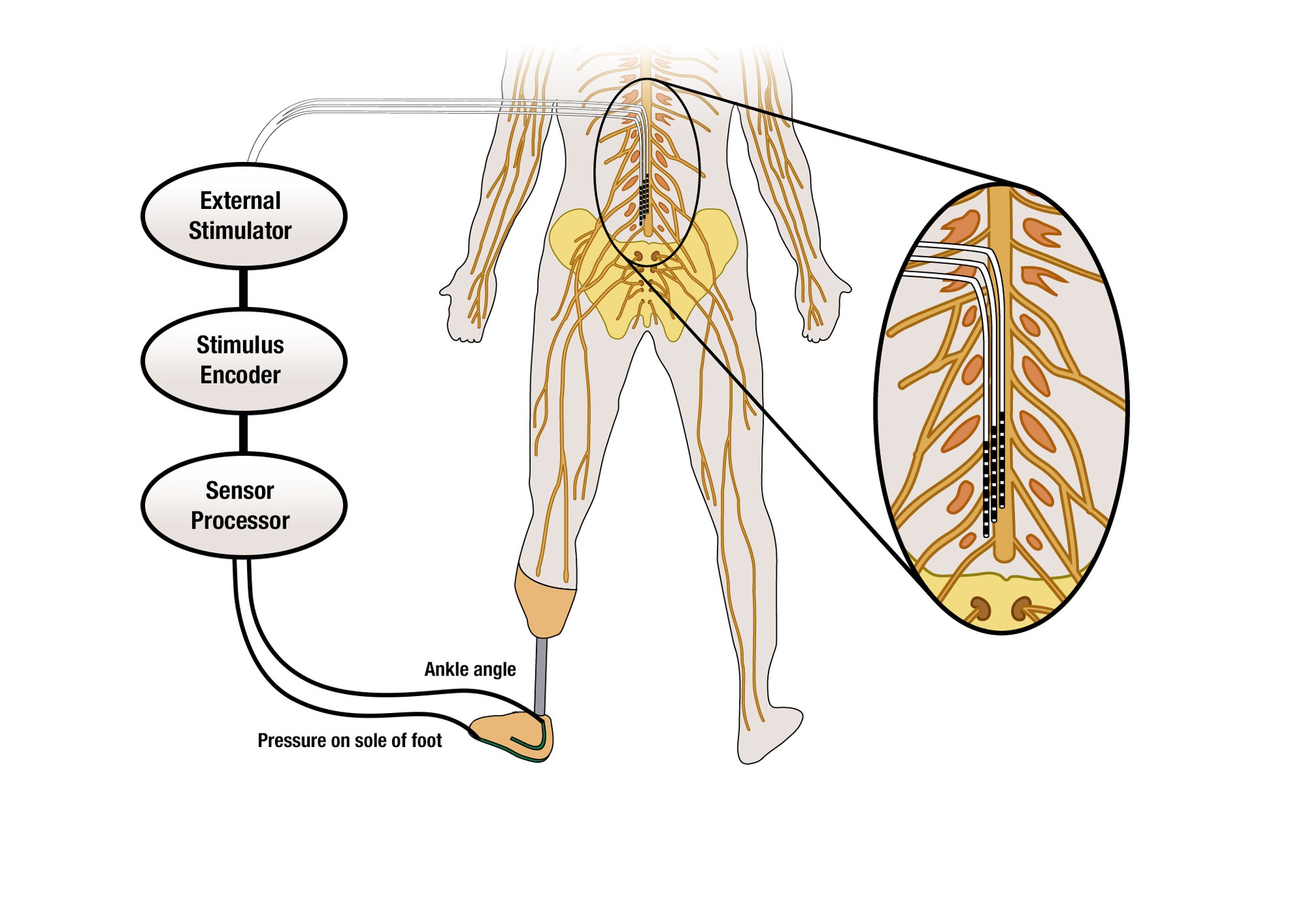 Schematic of the approach for providing sensory feedback.

PITTSBURGH (December 12, 2017)…Our tactile senses keep us aware of our environment and are essential for the execution of natural movement. Though there have been many advances in modern prosthetic devices, the loss of sensory feedback remains an issue, and many amputees struggle with everyday movement. Lack of sensory feedback in transtibial (below-knee) amputation means that the prosthesis user must rely on their residual limb for all motor skills. Patients suffer with problems in balance control, risk of falling, and severe phantom limb pain. A University of Pittsburgh group seeks to address this need for sensory feedback in prosthetic devices.

Lee Fisher, assistant professor of physical medicine and rehabilitation, and Doug Weber, associate professor of bioengineering, were one of four University of Pittsburgh teams to receive a $5.3M National Institutes of Health (NIH) BRAIN award.

The NIH Brain Research through Advancing Innovative Neurotechnologies (BRAIN) Initiative aims to advance understanding of the human brain. Fisher and Weber won an award in the “Next Generation Human Invasive Devices” category for their project titled “Spinal root stimulation for restoration of function in lower limb amputees.”

“Evidence suggests that lack of sensory feedback contributes to phantom limb pain (PLP), a phenomenon where amputees feel pain from the missing limb, which can be long-lasting and severe,” Dr. Fisher said. “We’ll be investigating how electric stimulation may both counter PLP and improve movement and balance.”

The team’s objectives are to 1) explore the effects of electrically stimulating the dorsal root ganglia and dorsal rootlets to generate sensations and reduce phantom limb pain, 2) characterize the responses to electrical stimulation in both the intact and amputated limbs to coordinate reflexes and improve movement, and 3) use electrical stimulation to decrease postural sway and increase gait stability.

Fisher and his team will use an FDA-cleared spinal cord stimulator to send electrical pulses to the dorsal root ganglia (DRG) and dorsal rootlets (DR) in hopes of reducing PLP. The stimulation creates sensations of pressure and movement in the amputated limb, thereby reducing PLP and improving prosthesis functionality.

The group will use the same electrical stimulation to characterize reflexive responses. Electromyography will be used to measure reflex responses generated in the muscles of the leg.  Having bilaterally coordinated reflexes will help prosthetic users when responding to unexpected situations, such as slips or falls. Being able to precisely control the patterns of reflexive activity will also help with everyday standing and walking.

The team will be using pressure sensitive insoles and joint angle sensors in the prosthetics. Fisher explains, “The insoles allow us to control stimulation. If we record increased pressure under the ball of the foot, we will increase stimulation for an electrode that generates a sensation at the ball of the foot. The goal is to make it feel like the sensations are coming from the prosthetic limb.” The study of these signals and modulation of sensory feedback through DRG/DR stimulation should improve movement by decreasing postural sway and increasing gait stability.

According to Dr. Fisher, making improvements in the sensory feedback of prosthetic devices could drastically improve the quality of life for their users by reducing phantom limb pain, increasing balance control and confidence, and making the prosthetic limb feel more natural.