Supports Governor Cuomo's Green New Deal, the Most Aggressive Climate Change Program in the Nation, by Spurring Innovation in the Green Economy 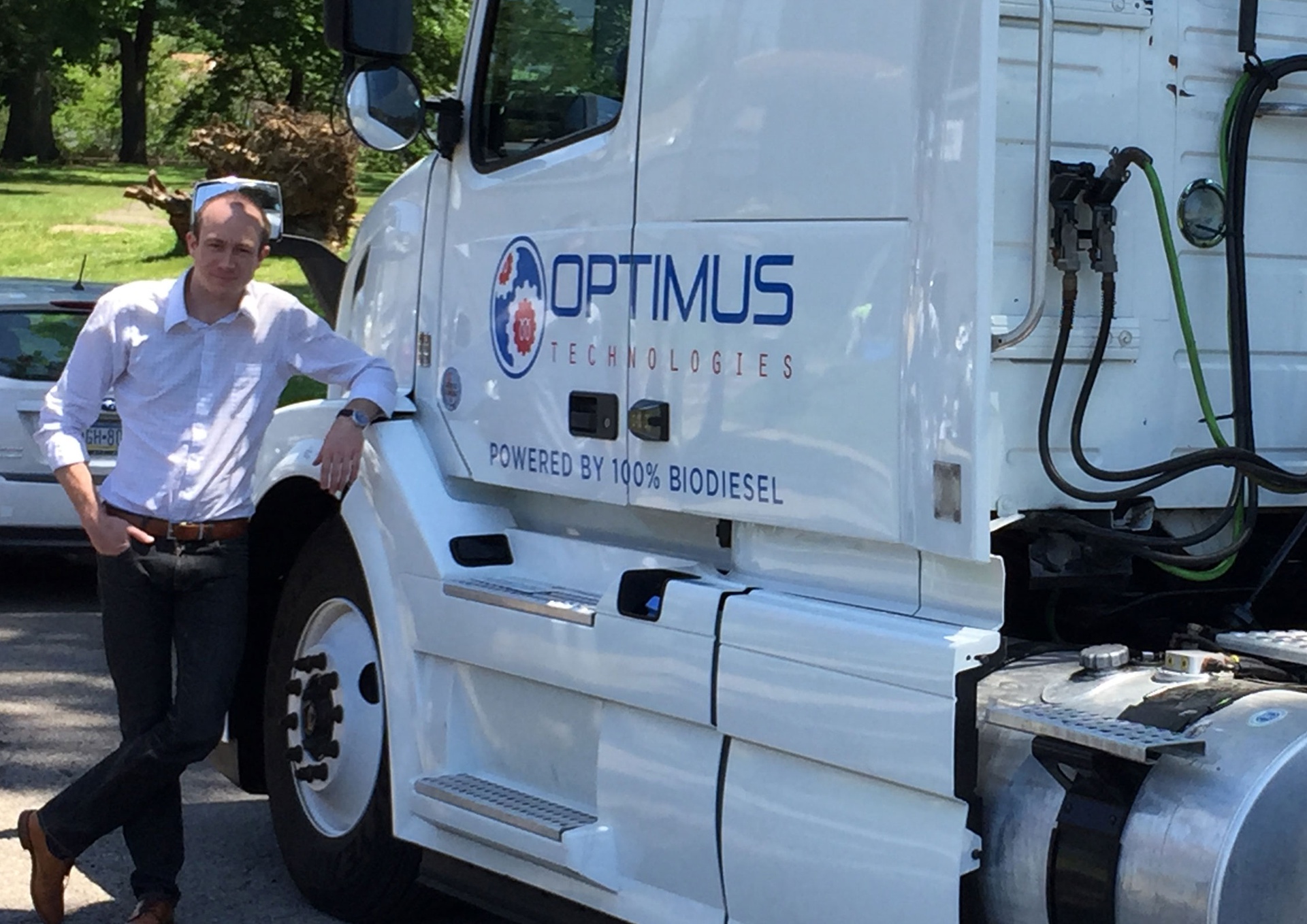 "We cannot successfully combat climate change without innovative technologies such as those being developed by 76West winners," Governor Cuomo said. "Reducing greenhouse gas emissions from transportation and increasing energy efficiency in our buildings are critical strategies in this fight. I congratulate Optimus Technologies and all of the 76West winners for their commitment to a cleaner future and new economic opportunity."

"I'm pleased to help announce the winners of the 76West Competition every year and see firsthand the success of these start-up companies," said Lieutenant Governor Kathy Hochul. "With the extension of 76West with an additional $20 million in funding for another four years, we will further advance the clean energy industry in the Southern Tier. This competition supports our ambitious clean energy goals and efforts to combat climate change, while creating innovative job opportunities and strengthening the economy of the region. I congratulate this year's 76West winners and their commitment to expanding in New York State to help ensure a cleaner and greener environment for the future."

A total of $2.5 million was competitively awarded to six innovative companies at today's awards ceremony at Binghamton University where Lieutenant Governor Kathy Hochul announced the winners, and was joined by elected officials, entrepreneurs and local business leaders. A $500,000 winner and four $250,000 winners were also named as part of the competition, which is administered by the New York State Energy Research and Development Authority (NYSERDA).

In total, 76West winners from the prior three years have raised $28 million in private capital, made multimillion-dollar investments in property and equipment in the region, and spent more than $1.7 million on key suppliers, and this year's winners will add to the continuation of this Southern Tier trend.

New York State Energy Research and Development Authority President and CEO Alicia Barton said, "The 76West Competition's previous winners are expanding their businesses, hiring new employees and scaling up innovative technologies, creating an engine for economic growth that is powered by Governor Cuomo's unwavering commitment to accelerating solutions that will help solve the climate crisis. I congratulate this year's winners and encourage them to keep pushing the envelope and developing forward-thinking innovations to help New York lead the nation in developing a world-class clean energy ecosystem."

In addition to revealing the 76West winners, Lieutenant Governor Hochul announced that the competition has been extended through 2023 with a $20 million commitment from Empire State Development as part of the Governor's Upstate Revitalization Initiative and that $3.5 million is being made available from existing 76West business support funds to organizations in the 76West geographic coverage area to develop and execute innovative programs that facilitate the formation and growth of clean energy companies to accelerate the region's growing clean energy ecosystem. The application deadline is November 20, 2019. For more information about this funding, visit NYSERDA's website.

In this year's 76West competition, NYSERDA received 169 applications representing 14 countries and 21 states. Of these, 18 semifinalists were chosen and participated in a two-day pitch session this summer at Binghamton University. Judges then recommended the top six winners.

Supported by previous rounds of 76West, several out-of-state winners have already integrated and expanded their business operations into the Southern Tier including Ireland-based Hub Controls and Dallas-based Skyven Technologies.

76West began in 2016 as a four-year $20 million competition and support program. Empire State Development has committed $20 million to extend the competition through 2023 as part of the Upstate Revitalization Initiative, offering $10 million in awards and $10 million in business support. Applicants will again compete for $2.5 million in total prizes each year, with a $1 million grand prize and other awards. NYSERDA will continue to administer 76West, working closely with the Southern Tier Regional Economic Development Council (REDC) and local partners in the region.

Funding for the first four years of the Competition was provided through the Regional Greenhouse Gas Initiative and the Clean Energy Fund and covered all of the Southern Tier Regional Economic Development Council (REDC) counties as well as three from the Western NY REDC (Allegany, Cattaraugus and Chautauqua). The extension through 2023 will focus on the Southern Tier REDC region and support ecosystem development in the Southern Tier.

Empire State Development Acting Commissioner and President & CEO-Designate Eric Gertler said, "The URI's strategic investments will continue to transform the Upstate economy by helping to renew the 76West Competition through 2023 - incentivizing clean energy innovation that will create even more jobs and opportunities in the Southern Tier and around New York State."

Southern Tier Regional Economic Development Council Co-Chairs Dr. Harvey Stenger, President of Binghamton University and Judy McKinney Cherry, Executive Director, Schuyler County Partnership for Economic Development said, "Innovation is a central component of the Southern Tier Soaring Upstate Revitalization Initiative plan. It is a key driver of economic growth in the region and the 76West Competition has brought some of the best and brightest innovators to the Southern Tier. Not only will the winners of this competition generate new job opportunities and help grow the economy, they will help address our state's future clean energy needs."

Assembly Member Donna Lupardo said, "76West has helped the Southern Tier continue its legacy of innovation and entrepreneurship by encouraging new businesses to locate in our region. Investments through 76West are complementing economic development efforts across the region as well as building on New York's status as a leader in the development of clean energy."

Governor Cuomo's Green New Deal is the most aggressive climate and clean energy initiative in the nation, putting the state on a path to being entirely carbon-neutral across all sectors of the economy and establishing a goal to achieve a zero-carbon emissions electricity sector by 2040, faster than any other state. It builds on New York's unprecedented ramp-up of clean energy including a $2.9 billion investment in 46 large-scale renewable projects across the state, the creation of more than 150,000 jobs in New York's clean energy sector, a commitment to develop nearly 1,700 megawatts of offshore wind by 2024, and 1,700 percent growth in the distributed solar sector since 2012.

The recently passed Climate Leadership and Community Protection Act (CLCPA) mandates the Green New Deal's national leading clean energy targets: nine gigawatts of offshore wind by 2035, six gigawatts of distributed solar by 2025, and three gigawatts of energy storage by 2030, while calling for an orderly and just transition to clean energy that creates jobs and continues fostering a green economy. The CLCPA also directs New York State agencies and authorities to collaborate with stakeholders to develop a plan to reduce greenhouse gas emissions by 85 percent from 1990 levels by 2050 and aim to invest 40 percent of clean energy and energy efficiency program resources to benefit disadvantaged communities.

Today's announcement complements "Southern Tier Soaring," the region's comprehensive blueprint to generate robust economic growth and community development. The state has already invested more than $4.6 billion in the region since 2012 to lay the groundwork for the plan - attracting a talented workforce, growing business and driving innovation. Today, unemployment is down to the lowest levels since before the Great Recession; personal and corporate income taxes are down; and businesses are choosing places like Binghamton, Johnson City and Corning as a destination in which to grow and invest. Now, the region is accelerating Southern Tier Soaring with a $500 million State investment through the Upstate Revitalization Initiative, announced by Governor Cuomo in December 2015. The State's $500 million investment will incentivize private business to invest well over $2.5 billion - and the region's plan, as submitted, projects up to 10,200 new jobs. More information is available here.