PITTSBURGH (December 8, 2015) … A team of chemical engineers at the University of Pittsburgh recently identified the two main factors for determining the optimal catalyst for turning atmospheric CO2 into liquid fuel. The results of the study, which appeared in the journal ACS Catalysis, will streamline the search for an inexpensive yet highly effective new catalyst.

Imagine a power plant that takes the excess carbon dioxide (CO2) put in the atmosphere by burning fossil fuels and converts it back into fuel. Now imagine that power plant uses only a little water and the energy in sunlight to operate. The power plant wouldn’t burn fossil fuels and would actually reduce the amount of CO2 in the atmosphere during the manufacturing process. For millions of years, actual plants have been using water, sunlight, and CO2 to create sugars that allow them to grow. Scientists around the globe are now adopting their energy-producing behavior.

“We’re trying to speed up the natural carbon cycle and make it more efficient,” said Karl Johnson, the William Kepler Whiteford Professor in the Department of Chemical & Petroleum Engineering at the University of Pittsburgh and principal investigator of the study. “You don’t have to waste energy on all the extra baggage it takes to grow plants, and the result is a man-made carbon cycle that produces liquid fuel.”

There’s one catch. CO2 is a very stable molecule, and enormous amounts of energy are required to get it to react. One common way to make use of excess CO2 involves removing an oxygen atom and combining the remaining CO with H2 to create methanol. However, during this process parts of the conversion reactor need to heat as high as 1000 degrees Celsius, which can be difficult to sustain, especially when the only energy source is the sun.

A catalyst can get the CO2 to react at much lower temperatures. Some researchers have been experimenting with different materials that can get the CO2 to split—even at room temperature. But these, and most, reactive catalysts already identified are too expensive to mass-produce, and fossil fuels still offer a cheap source of energy. The low price and abundance of fossil fuels prevents a lot of companies from investing in the expensive trial and error process of researching new catalysts.

The study, “Screening Lewis Pair Moieties for Catalytic Hydrogenation of CO2 in Functionalized UiO-66” (DOI: 10.1021/acscatal.5b01191) provides researchers with a good idea of how they should start looking for an optimal catalyst. Johnson, along with study co-author and post-doctoral researcher Jingyun Ye at the University of Pittsburgh, examined a series of eight different functional groups of Lewis acid and base pairs (Lewis pairs for short), which are highly reactive compounds often used as catalysts. They found that the two factors qualifying a material as a good catalyst are its hydrogen adsorption energy and the Lewis pair’s hardness—a measurement of the difference between its ionization potential and electron affinity.

Using this framework, Johnson plans to work with experimentalists to screen for catalysts more effectively, and hopefully, bring researchers closer to creating power plants that create liquid fuel while reducing atmospheric CO2. Imagine contributing to the reduction of CO2 in the atmosphere every time you fill up your gas tank.

Image (inset) and below: Hybrid porous catalysts can be “grown” to capture and convert carbon dioxide to useful fuels, in analogy to a plant’s ability to turn carbon dioxide into biomass. Computer modeling showed how to tune catalytic functional groups embedded within a nano-porous solid to facilitate fast reaction rates for converting carbon dioxide and hydrogen to valuable products. (Design: Jingyun Ye) 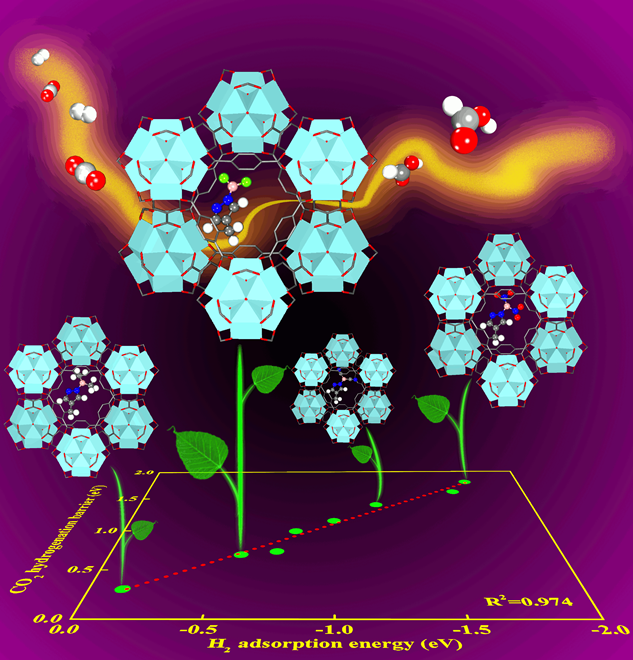