Reshaping the Plastic Lifecycle Into a Circle

360 million metric tonnes of new plastic was produced in 2018. Here’s where it all went, and why the world must transform plastic use from linear to circular.

In 1950, 2 million metric tonnes of new plastic was produced globally. In 2018, the world produced 360 million metric tonnes of plastics. Because of their low cost, durability and versatility, plastics are everywhere–including in the environment–and only 9 percent of the plastic ever generated has been recycled. The vast majority ends up in landfills, where its slow degradation allows it to accumulate, while pervasive microplastics have been found everywhere, from inside living bodies to the bottom of the ocean.

“At our current rate of plastic waste generation, increasing waste management capacity will not be sufficient to reach plastic pollution goals alone,” said Vikas Khanna, associate professor of civil and environmental engineering at the University of Pittsburgh Swanson School of Engineering. “There is an urgent need to take actions like limiting global virgin plastic production from fossil fuels and designing products and packaging for recyclability.”

New research led by Khanna gives a bird’s-eye view of the scale of plastic creation globally, tracing where it’s produced, where it ends up, and its environmental impact.

The researchers found the greenhouse gas emissions associated with the production of plastic in 2018 staggering: 170 million metric tonnes of primary plastics were traded globally in 2018, with associated greenhouse gas emissions accounting for 350 million metric tonnes of CO2 equivalent–about the same amount produced by nations like Italy and France in a year.

“And if anything, our estimation is on the lower end. Converting primary plastic resins into end use products will result in additional greenhouse gases and other emissions,” warned Khanna.

The work was recently published in the journal ACS Sustainable Chemistry & Engineering.

“We know plastics are a problem, and we know keeping materials in a circular economy instead of the take-make-waste model we’re used to is a great solution,” said Khanna. “But if we don’t have an understanding of the current state of the system, then it’s hard to put numbers to it and understand the scale. We wanted to understand how plastics are mobilized across geographical boundaries.”

Since international trade plays such a critical role in making material goods available, including plastics, the researchers applied network theory to data from the UN Comtrade Database to understand the role of individual countries, trade relationships between countries, and structural characteristics that governed these interactions. The global primary plastic trade network (GPPTN) that they created designated each country as a “node” in the network and a trade relationship between two countries as an “edge,” allowing them to determine the critical actors (countries) and who is making the biggest impact. 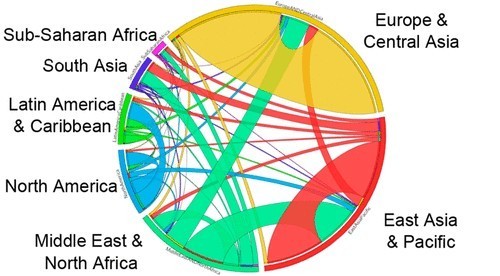 The researchers examined 11 primary thermoplastic resins that make up the majority of plastic products. They found that a majority of the most influential nodes in the model are exporting more plastics than they import: Saudi Arabia is the leading exporter, followed by the U.S., South Korea, Germany and Belgium.The top five importers of primary plastic resins are China, Germany, the U.S., Italy and India.

“The results are particularly important and timely, especially in light of the recent discussions during Conference of the Parties (COP26) in Glasgow and the importance of understanding where emissions are coming from in key sectors,” said co-author Melissa Bilec, Co-director of Mascaro Center for Sustainable Innovation and William Kepler Whiteford Professor of Civil and Environmental Engineering. “The collaboration with Dr. Khanna and his lab allows us to learn new systems-level modeling techniques as we converge towards understanding solutions to our complex challenges.”

This paper, “Quantifying Energy and Greenhouse Gas Emissions Embodied in Global Primary Plastic Trade Network,” (DOI: 10.1021/acssuschemeng.1c05236) is supported by the NSF convergence research project on the circular economy, which is led by Bilec.

Using more recycled plastics instead of creating new resins that eventually make their way to landfills would be substantially better for the environment; however, financial and behavioral barriers both need to be addressed before a true circular economy for plastics can become a reality.

“Even though emerging chemical recycling techniques promise to recover more material in an economically and environmentally sound way, we need to make it so that using recycled materials is as cost-effective as using virgin plastic resins,” said Khanna. “Our next step is to understand the interaction between the GPPTN and the plastic waste trade network to identify the opportunities where investment could encourage a circular plastics economy.”

Reshaping the Plastic Lifecycle Into a Circle