Shining a light on methane transformation 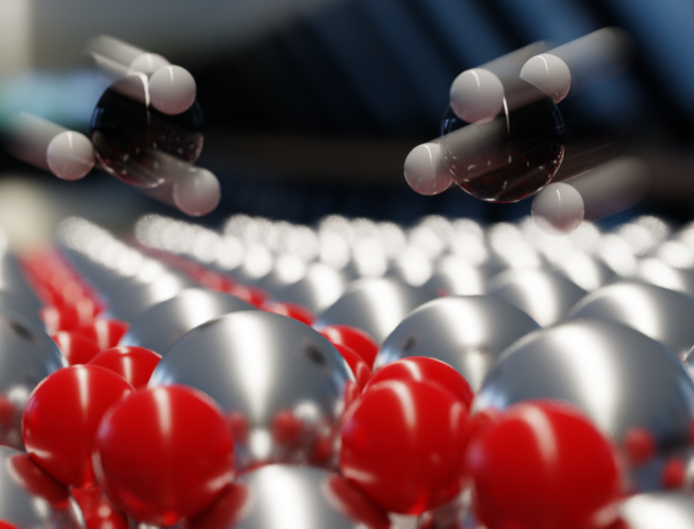 Associate Professor Giannis Mpourmpakis is exploring how to use light to economically convert methane at fracking sites into valuable chemicals, not too dissimilar from how a plant transforms the sun’s energy into fuel.

The growth of the hydrofracturing (“fracking”) industry in the U.S. has increased the production of methane, whose uses as both a fuel and feedstock are extremely valuable in the petrochemical industry. But since most fracking occurs in rural and isolated areas far from production facilities, the cost to store and transport methane is very high. Since methane is a significant greenhouse gas, it is being flared as it is released into the atmosphere resulting in approximately $16 billion of value loss annually.

However, there may be a way to use light to economically convert the methane on-site into valuable chemicals, not too dissimilar from how a plant transforms the sun’s energy into fuel.

Chemical engineering researchers from the University of Pittsburgh recently received a $110,000 New Directions Grant from the American Chemical Society Petroleum Research Fund to explore this possibility and reduce methane loss and waste.

“We are very excited to start building this new research direction in our laboratory. Using light as an energy source, we can convert methane to valuable products, while reducing the energy cost associated with its chemical conversion,” explained Giannis Mpourmpakis, Bicentennial Alumni Faculty Fellow and associate professor of chemical and petroleum engineering at Pitt’s Swanson School of Engineering. “Integrating photocatalysis with traditional thermal catalysis has the potential to advance shale gas utilization and turn a waste by-product and greenhouse gas into a valuable resource.”

According to Mpourmpakis, who leads the Computer-Aided Nano and Energy Lab (CANELa) at Pitt, traditional thermal catalytic conversion of methane to value-added fuels and chemicals is very energy demanding, making it cost-prohibitive at typically remote fracking sites. However, research has identified metal-oxide photocatalysts that can convert methane under mild conditions by photoactivating C-H bonds with visible or near-ultraviolet illumination.

Unfortunately, the atomic-level mechanisms of this conversion process are not clearly understood, and traditional lab experimentation would result in costly trial and error. Mpourmpakis and the CANELa group however have successfully used computational modeling to simulate catalytic processes and test numerous potential catalysts and their reactions rapidly and at a tremendously lower cost. The grant will allow his lab to develop a more robust understanding of photocatalysis and the mechanisms necessary to convert methane.

“Even though it’s a by-product of the hydrofracturing process, methane is a valuable building block for chemicals but must be burned off rather than utilized so that its raw form doesn’t pollute the atmosphere,” Mpourmpakis said. “Yet the ability to capture methane and immediately convert it into a fuel or value-added chemical would greatly reduce its environmental impact and enhance its industrial use.”

Shining a light on methane transformation