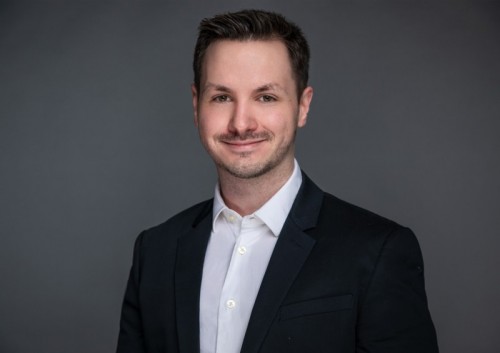 Steven Wellman, a bioengineering PhD candidate at the University of Pittsburgh, received a Predoctoral to Postdoctoral Fellow Transition Award (F99/K00) from the National Institutes of Health for his work with neural interfacing technology. These revolutionary devices have the potential to significantly advance our understanding of brain function and enable researchers to restore motor and sensory control lost from neurological disorders.

Wellman is a member of the BIONIC Lab at Pitt’s Swanson School of Engineering, which is led by Takashi D.Y. Kozai, assistant professor of bioengineering. His doctoral work focuses on the limitations of penetrating brain microelectrodes and the mechanisms that contribute to device failure.

“Despite the incredible potential of this technology to improve human health, the efficacy of intracortical microelectrodes for clinical therapy is limited by an inability to detect or modulate neurons over time and is presumed to be due to severe bodily reactions to a foreign object,” he said.

Researchers have yet to determine the biological mechanisms behind device failure, but recent studies suggest that neurovascular dysfunction may play a role in progressive neuron loss and tissue failure after implantation. Wellman studies how pericytes, specialized cells that work closely with cerebral blood vessels in the brain, contribute to this process.

“Neurovascular health and function are governed in part by perivascular pericytes,” he explained. “These cells demonstrate important roles in regulating vascular tone, blood-brain barrier integrity, and neuroimmune functions and have become increasingly recognized as prominent figures in the pathogenesis of brain inflammation and disease.”

In his project, Wellman examines how the structure and function of brain pericytes are altered during microelectrode implantation and subsequently affect neuronal health and neurovascular function. To do so, he uses a combination of two-photon imaging, electrophysiology, adeno-associated viruses (AAVs), and optogenetics within mice.

He also studies how pericyte activity can be modulated to improve neurovascular function and tissue health following brain injury. The results of this work could impact future therapies aimed at improving electrode-tissue integration, device performance and fidelity, and neurodegenerative brain injuries and diseases.

“The human health benefits of neural interfacing technology are highlighted by their translational potential from bench-to-bedside,” Wellman added. “At the benchside, microelectrodes are an effective tool enabling neuroscientists to interface bi-directionally with neuronal, glial, and vascular cells within the brain in order to understand their physiological and pathological roles.

“At the bedside, researchers have demonstrated the clinical power of neural microelectrodes as part of brain-computer interfaces (BCIs) for human rehabilitation by restoring motor control to tetraplegic patients and, more recently, going as far as re-establishing sensory input (haptic feedback) through bi-directional neuroprostheses.”

Wellman’s work will not only impact the field of brain-computer interfaces, but it will also branch into other areas of brain research in which pericyte and vascular dysfunction are present, including ischemia, hemorrhagic stroke, cerebrovascular disease, and Alzheimer’s disease (AD).

“Ultimately, my long-term career goal is to apply these advanced neurotechnologies and experimental methodologies to better understand and treat progressive neurodegenerative disease, particularly AD, in which neurovascular injury and dysfunction can figure prominently,” Wellman said.