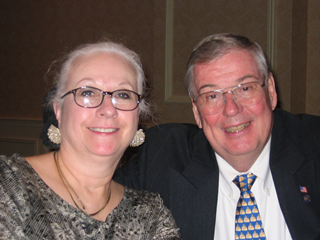 PITTSBURGH (September 16, 2015) … To recognize the legacy of former engineering Dean Charles A. Sorber, the University of Pittsburgh's Swanson School of Engineering announced that his widow Linda has established the Charles A. and Linda E. Sorber Fellows Fund. The endowment will benefit outstanding undergraduate engineering students who are conducting research projects in sustainable engineering, specifically in the areas of wastewater treatment, sanitation, disinfection or disease control in the Swanson School's Mascaro Center for Sustainable Innovation.

Dr. Sorber, who passed away October 18, 2013, earned his bachelor's and master's degrees in sanitary engineering at Penn State and a doctorate at The University of Texas at Austin. He served as dean of Pitt's engineering school from 1986-1993.

"Chuck's leadership is considered by many to have helped transform our engineering school into a major research institution," noted Gerald D. Holder, PhD, U.S. Steel Dean of Engineering. "His academic, administrative and research accomplishments have had a tremendous impact here and at The University of Texas System. On behalf of our students, we're very grateful to Linda for establishing the Sorber Fellows Program."

While at Pitt, Dr. Sorber became involved in the Stockholm Water Symposium, the Stockholm Water Prize (similar to a Noble Prize awarded by the King of Sweden but not established by Noble) and the Stockholm Junior Water Prize, an international competitive award to high school students for outstanding research in water issues. Dr. Sorber served as chairperson of the US committee to select an entrant into the competition, as well as chairperson of the international award selection committee.

"Chuck felt it was vital to cultivate an early interest in students into research issues affecting one of earth's most precious resources.  It is my hope that this fellowship will carry forward his interests and encourage students at Pitt to pursue careers in this important area," Mrs. Sorber said.

Born in Kingston, Pa., Dr. Sorber began his professional career with the U.S. Army, serving in Europe with the U.S. Army Environmental Hygiene Agency and the U.S. Army Medical Research and Development Command. For his service he was awarded the Meritorious Service Medal with two oak leaf clusters. In 1975 he joined The University of Texas at San Antonio, where his wife Linda was also a faculty member. At UT San Antonio he began the Center for Applied Research and Technology in the College of Science and Mathematics. By 1980 he became associate dean of engineering for academic affairs at the College of Engineering at The University of Texas at Austin.

Dr. Sorber authored or co-authored more than 130 papers and reports in the areas of land application of wastewater and sludges, water and wastewater reuse, water and wastewater disinfection and higher education. Most notably he was a Fellow in the American Society of Civil Engineers; a Diplomate of the American Academy of Environmental Engineers; and served as President of the Water Environmental Federation during 1992-93. He remained active with the Stockholm Water Prize and Junior Water Prize until 2008.