"If I told my 10-year-old self I was going to work with NASA one day, I wouldn’t believe it,” said Seth Roffe, a doctoral student in electrical and computer engineering (ECE) at the University of Pittsburgh. “Any kid who is interested in space dreams of that opportunity.”

That dream became a reality for Roffe, his fellow students and their faculty leads, who recently delivered their newest space system to NASA for launch at the NASA Kennedy Space Center on SpaceX-24 this fall. The system of innovative new computers and sensors, uniquely designed for space and dubbed the Configurable and Autonomous Sensor Processing Research or CASPR system, is part of the U.S. Department of Defense’s Space Test Program (STP), which provides an opportunity to perform cutting-edge technology research on the International Space Station (ISS). 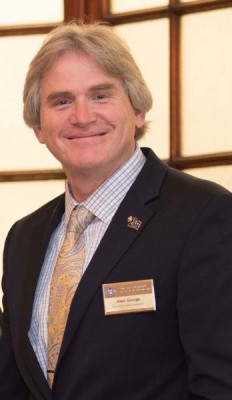 The students and faculty are members of the NSF Center for Space, High-performance, and Resilient Computing (SHREC) headquartered at Pitt. SHREC is a national research center sponsored by the National Science Foundation and dedicated to assisting U.S. industrial partners, government agencies, and research organizations in mission-critical computing. Both SHREC and the CASPR mission are led by Dr. Alan George, Mickle Chair Professor and Department Chair of ECE.

“SHREC provides Pitt students with the unique opportunity to work with dozens of leading space agencies and companies while earning their engineering degrees,” said Dr. George. “CASPR is the third space system and mission led and developed by SHREC students and faculty, and it represents one of the most advanced space systems ever developed by students and faculty at any university.”

As part of their recent delivery to NASA, the SHREC team added two new types of space sensors that will be used to get a better view of Earth and its surroundings.

The sensors include a high-resolution binocular telescopic imager, developed by SHREC collaborator Satlantis, and a neuromorphic event-based camera, developed by Prophesee and created by Dr. Ryad Benosman, professor of ophthalmology and ECE at Pitt.

“This binocular telescope will point to Earth, and its ground-resolved distance (GRD) will enable us to see things like cars, roads, or trees from the ISS,” said Roffe, who is project manager of STP-H7-CASPR. “There are other telescopes with this level of GRD, but this one is small – roughly the size of a toaster oven.”

With this hardware and an algorithm from Satlantis, they hope to get more detailed images of Earth’s coastlines and other areas of interest for researchers.

Unlike the binocular telescope, the neuromorphic sensor will face the horizon, in the direction that the ISS is moving. The device emulates the human retina and will be used to track fast-moving objects in space and improve situational awareness.

“When you take a photo with a normal camera, you take a frame, capturing everything in a field of view,” Roffe explained. “This camera is special because it only captures events by looking for changing light intensity in each pixel, which makes it really good at tracking motion.”

Let’s say that you used this technology to take a picture of someone walking. The resulting image would only reveal the person in motion, omitting the static background. This device could ultimately help mitigate collisions or assist in docking to the ISS. 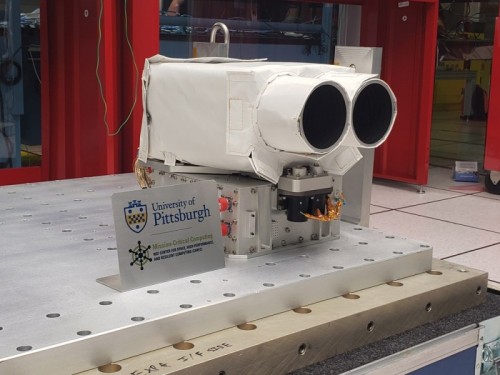 Performing research on the ISS requires small yet robust tools that are equipped to handle space’s harsh environment. In addition to new sensors, the CASPR system also includes a pair of new high-performance computers for space, each known as a SHREC Space Processor (SSP), which is built to withstand these challenging conditions and perform better than its predecessors from SHREC.

“With SSP, the SHREC team has created one of the most innovative, powerful, dependable, and adaptable types of space computers in the world, and our space computers have been adopted by groups across the country for a growing list of recent and upcoming space missions,” said Dr. George. “The SSP features a unique mix of fixed and reconfigurable electronics, as well as a hybrid combination of commercial and radiation-hardened technologies, resulting in a system that is very powerful, versatile, and resilient and yet very small in size, weight, power, and cost.”

The computing system will also test a commercial GPU, or graphics processing unit, to evaluate how it performs in space. GPUs are more powerful than their CPU counterparts for some applications, which for example would allow modern satellites to perform machine learning or improve graphics rendering in space.

“This project is really cool because GPUs haven’t flown very often, so it is really leading edge, and our team is doing great work adding resilience to machine learning,” Roffe added. “The area of a GPU that is vulnerable to radiation is much larger than that of a CPU, so we’re excited to see what happens.”

A Space for Students to Shine

SHREC gives students in the Swanson School of Engineering a unique opportunity to interact with experts at NASA or the Department of Defense and see their work take flight.

In May 2019, a collaborative effort sent the Spacecraft Supercomputing for Image and Video Processing (SSIVP) computer cluster to the ISS on the STP-H6 mission. Like CASPR, this project involved faculty and students from the Swanson School’s Department of Electrical and Computer Engineering and Department of Mechanical Engineering and Materials Sciences. In the latter department, the faculty lead for CASPR is Dr. Matthew Barry, an expert in thermal and mechanical issues for space systems.

Photo caption 1: Both SHREC and the CASPR mission are led by Dr. Alan George, Mickle Chair Professor and Department Chair of ECE.