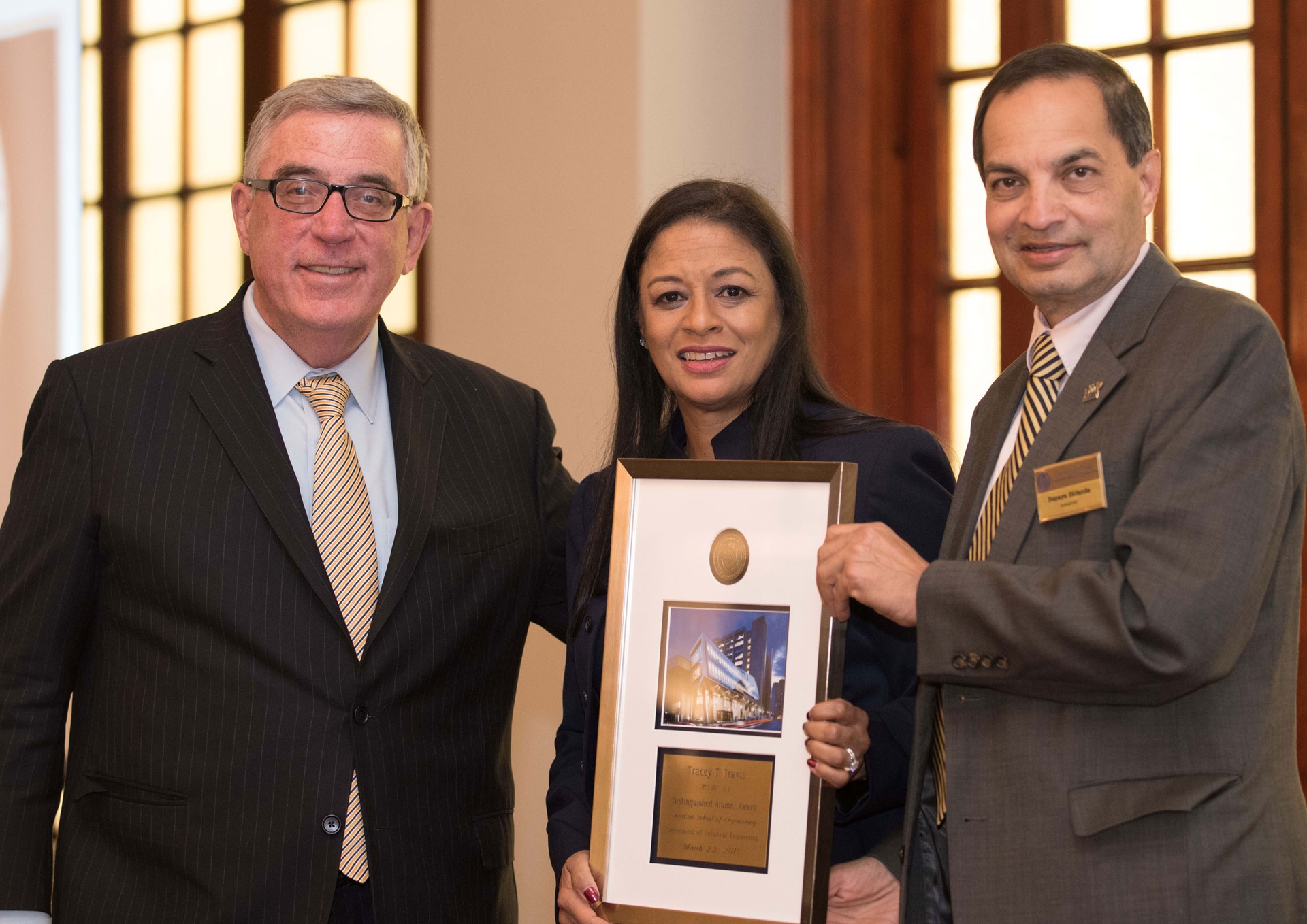 This year’s recipient for the Department of Industrial Engineering is Tracey T. Travis, BSIE ‘83, Executive Vice President of Finance and Chief Financial Officer of The Estée Lauder Companies.

“Today, at the Estee Lauder Corporation as CFO and Executive Vice President of Finance, she is responsible for global finance, IT, investor relations and process improvement among other duties,” said Dean Holder. “Our Industrial Engineering program is the second oldest in the U.S., and one of the top 10 public programs. It has graduated outstanding IEs throughout its history, and Tracey is no exception.”

About Tracey Travis
Tracey Travis received a bachelor’s degree in Industrial Engineering from the University of Pittsburgh and an MBA in Finance and Operations Management from Columbia University. She is currently the Executive Vice President of Finance and Chief Financial Officer of The Estée Lauder Companies with responsibilities for global finance, accounting, investor relations, information technology, and strategy and new business development. She also co-leads the company’s major cost savings and process improvement initiatives.

Previously, Ms. Travis was Senior Vice President of Finance and Chief Financial Officer at Ralph Lauren Corporation from January 2005-July 2012. In both roles, she led and supported multiple acquisitions, the development of enhanced capital structures and shareholder returns, and technology transformations.

Ms. Travis was employed with Limited Brands in Columbus, Ohio from 2001-2004 as Chief Financial Officer of Intimate Brands, Inc. and as Senior Vice President of Finance for Limited Brands. From 1999-2001 she was Chief Financial Officer of the Americas Group of American National Can. Prior to this position, she held various management positions at Pepsico/Pepsi Bottling Group from 1989-1999. Ms. Travis began her career at General Motors first as an engineer, then after receiving a GM Fellowship to pursue her MBA, she returned to General Motors as a Financial Executive.

She currently serves as a director on the boards of Accenture PLC and Lincoln Center Theater in New York and previously on the boards of Campbell Soup Company and Jo-Ann Stores Inc. where she chaired the Audit Committee. She is a member of the Board of Overseers for Columbia University’s Graduate School of Business and recently served on the University of Pittsburgh Board of Trustees.

Treasury and Risk Management magazine recognized Ms. Travis as one of the Top 25 Women in Finance in 2005 and one of the 100 Most Influential People in Finance in 2012. Institutional Investor magazine granted her the Best CFO award in 2008 and Black Enterprise magazine named her one of the Top 100 African Americans in Corporate America in 2009 and 2017. In 2011 Ms. Travis served as an inaugural member of the Wall Street Journal’s CFO Forum and in 2016 she received Legal Momentum’s Aiming High Award.