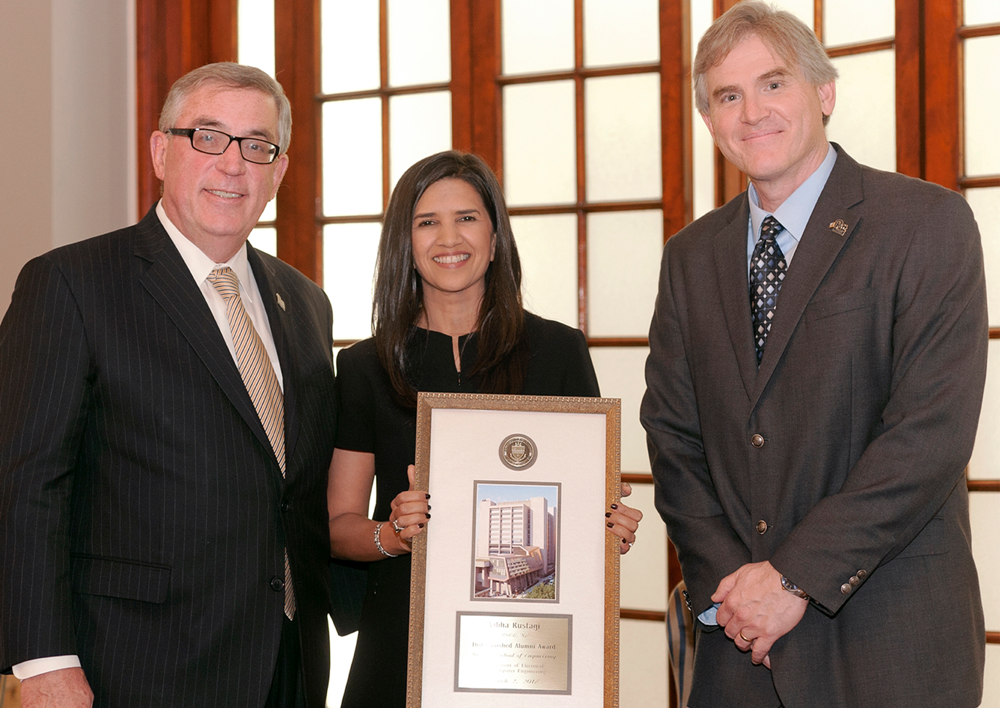 PITTSBURGH (March 7, 2017) … Collectively they are professors, researchers and authors; inventors, builders and producers; business leaders, entrepreneurs and industry pioneers. The 53rd annual Distinguished Alumni Banquet brought together honorees from each of the Swanson School of Engineering’s six departments and one overall honoree to represent the entire school. The banquet took place at the University of Pittsburgh's Alumni Hall, and Gerald D. Holder, US Steel Dean of Engineering, presented the awards.

This year’s recipient for the Department of Electrical and Computer Engineering was Vibha Rustagi, BSEE ’87, CEO of itaas, a Cognizant Company.

“Engineers often have the ability to extend their expertise and abilities into other diverse fields, and Vibha is an example of how that translates into innovation and entrepreneurship,” said Dean Holder. “She co-founded her consulting firm, itaas, which was a startup poised for growth in the nascent digital communication industry. Vibha’s success is also reflected in the many patents she has been awarded, as well as recognition throughout our now-ubiquitous digital communications industry, including being named one of the most powerful women in cable, receiving the Vanguard Award from the Internet and TV Expo, the 2015 Women in Technology Award, and induction into the Cable TV Pioneers.

About Vibha Rustagi
Vibha Rustagi earned a BS in electrical engineering from the University of Pittsburgh and an MBA from the Mark Robinson School of Business at Georgia State University.

Rustagi has been involved in the telecommunications and cable industries for over 20 years and started her career at Scientific-Atlanta, now Cisco, where she was integrally involved in the design and launch of the first digital networks and was awarded seven patents.

In 1999, Rustagi co-founded itaas, a consulting firm focusing on the digital video delivery ecosystem where she served as itaas’ CEO and president. Under her leadership, itaas grew from a three-person start-up to a globally successful company, helping cutting-edge technology and telecommunications companies deliver a broad range of services to consumer devices. In 2014, itaas was acquired by Cognizant, one of the world’s leading professional services companies, transforming clients’ business, operating and technology models for the digital era, with over 260,000 employees worldwide.

At Cognizant, Rustagi served as the CEO of itaas, a Cognizant Company, and is now the Head of Technology Ventures, Strategic Growth Areas and M&A for Cognizant’s Communications, Media and Technology Practice.

Over the years, Rustagi has been honored by the cable industry as one of 12 cable executives in Communications Technology Cable Hall of Fame. At the 2014 National Cable TV Conference, Rustagi was inducted into the Cable TV Pioneers. And, at the 2015 Internet and TV Expo, she was awarded the most prestigious award in the industry – The Vanguard Award for Associates and Affiliates. Later in 2015, she was awarded the 2015 Women in Technology award by Society of Cable Telecommunications Engineers, Women in Cable Telecommunications and Cablefax.